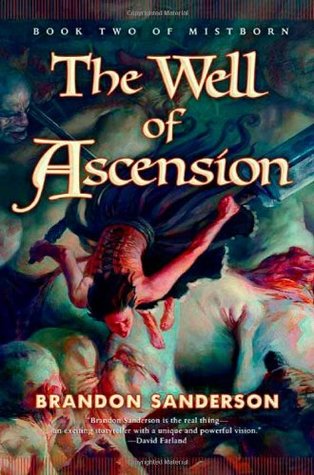 “All of the brilliant ideas in the world cannot save your kingdom if no one will listen to them.”

As much as I love this story, this world, all these unique concepts, I have to be true to myself about this book’s rating. The start of this book was terribly boring. Like, so boring that I finished seven books while reading this one. Once you get through about twenty to twenty-five chapters the story finally does begin to pick up. And by pick up, I mean a crazy avalanche of twists and turns start to happen. I immediately got re-immersed into the Mistborn world from The Final Empire that I loved and gave five stars to. Unfortunately, the amazing-ness I remembered started too late for me to even consider giving this five stars (like everyone else I know that are reliable and I have the utmost respect for). So hopefully you guys don’t want to kill me for giving this book a three star rating!

The Well of Ascension picks up two years after the fall of The Final Empire. A lot has changed since then. Elend is now king, even though the members on this council are having doubts about his leadership. There are not only one, but three armies that want to lay siege to Luthadel. Two are already at the gates of their city and ready to take it over, with one of those being Elend’s tyrant of a father, Straff Ventur. Saze has stumbled upon some special text that has made the prophecy more important than ever before. The mists are not only occurring more frequently, but are also occurring earlier with a terror living inside. The original crew is still around, but one of them is in disguise helping Straff Venture’s side. And Vin is constantly struggling with who she really is, while trying to be what everyone else needs her to be.

(Minor spoilers ahead! Please continue reading at your own risk!)

Vin. God, where do I even start with Vin? Vin is the character that every girl needs to read about. She is one of the most feminist friendly characters I’ve ever read about, while being in a world filled with strong male characters as well. Vin is a refreshing take on what a fantasy female lead can be! My heart broke for her at the end of this book, but I couldn’t help but be in utter awe of her decision no matter how grim the outcome will be. I can only think of one other female lead, that I’ve read about recently, that picks the greater good over her “soulmate”; Meda in Crushed. This event alone could be the sole reason that I will read everything in the Cosmere universe. Vin is becoming my favorite protagonist of all time. Like, I want to be Vin when I grow up.

The other character I really enjoyed in this story was OreSeur, and HOLY MOTHER OF TWISTS, I did not see that coming what so ever! It was so funny, because I even wrote in my notes “The relationship growth between Vin and OreSeur is, by far, my favorite part of this book”. I’m not sure if the twist made me appreciate my sentence more or less. I think I’m going to go with more, because I won’t forget that sucker punch for quite some time. I hope he not only comes back in The Hero of Ages, but plays an even bigger role in it.

Elend, just like the first half of this book, was boring to me. I’m sure his role in The Hero of Ages will be amazing, mostly because of what happens at the end of this book, but I also don’t feel like he will play such a political role. He has proven himself time and time again, and I’m not sure there will be any really contestation for the throne. I was a little confused about Elend in the end of this book though Like, did we just discover how to make Mistborns?, because it happened a little fast for me to comprehend what and the hell I just read.

Zane, the new Mistborn we learn about in this world, was annoying most the time to me. I was with OreSeur and didn’t like or trust him from the start Also, because of those Inquisitor spikes that were in his chest, I don’t believe his ass is dead whatsoever!. I kind of wonder if he was just created to make a little turmoil between Vin and Elend. Regardless, I wasn’t a fan of him.

Watching Sazed lose his convictions gutted me. He was probably my second favorite character in The Final Empire, and my love for this Terrisman just grew in this installment. I was on the fence about Tindwyl through most the book, but Sazed’s love for her made me develop pretty strong feelings for her towards the end. Also, I might be completely wrong here, but I sort of am tricking myself to think that Sazed will be the hero in the prophecy. I’m probably crazy, but I just can’t un-see it at this point with my delusional fangirl eyes.

Breeze kind of blew me away this book. I couldn’t believe he was a full-blooded noble! And he also proved me wrong with his choice of “girlfriend”, because Allrianne also blew me away! She not only completely turned the tides of the end’s events with her choice, she just proved to be a selfless and strong woman, just like Vin. I went into her character expecting nothing but “she’s probably the Kandra” to being astonished by her actions over and over again. Breeze and Allrianne definitely found their way inside of my heart in this book. I’m also excited for more of Allrianne’s father, Cett, in The Hero of Ages. Oh, and I can’t be the only person who couldn’t help but think of Chris Brown every time Allrianne called Breeze “Breezy”, right?

Obviously, the end of this book there was a huge surprise, to say the least. This twist just proves what an amazing story teller Brandon Sanderson truly is, because I’m not even sure how to feel about it. All I know is that I never saw what happened coming. I was at a loss for words. Superbly done.

The end of The Well of Ascension did make me very eager to jump into The Hero of Ages. I just pray that it doesn’t have the slow start that this book did, because the slow pacing at the start of this book seriously made me consider DNF it. The last 25% of this book was, without a doubt, five star (if not higher) quality.

“…A man can only stumble for so long before he either falls or stands up straight.”