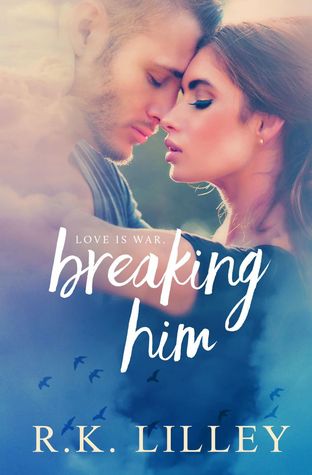 “There is only one heart in this universe that calls to mine, and it does call. Constantly, relentlessly, it sings out to me in a captivating, resonating voice. Day after day, year after year, it calls to me. But I won’t listen to it. It belongs to a liar. ”

I’ve read everything by R.K. Lilley, so when I heard she had a new book series coming out I knew I wouldn’t be able to resist. Her writing style is just my weakness. I gobble up everything she creates. Bad Things, to this day, has the best sex scene I’ve ever read. If you’re interested in getting into contemporary romance with light erotica I can’t recommend this world enough (Yes, I saw that Frankie shout out).

This all being said, I have to preface this review with this: These books are light hearted, but filled to the brim with angst. Sometimes the plot will make you want to scream with frustration. Sometimes you’ll question how in the hell they’d be up for sex at that exact moment. Sometimes your eyes will feel like they are going to roll out of your head because of a very helpful coincidence. So as long as you go into this story expecting that, you’ll be okay. This book isn’t going to be the next Pride and Prejudice, but it sure in the hell is better than Fifty Shades of Grey.

This story is about a rich boy named Dante, and girl from the other side of the tracks. The story is constantly switching between their present and their past, giving glimpses on why they aren’t together currently. The back-story is that Scarlett was a poor girl who was abandoned at birth, and left in a trashcan outside an orphanage. Obviously, there is a mystery about who her parents (mostly her father) are, but her supposed Grandmother adopts her and raises her. She isn’t shown any love by anyone, except by a sweet old lady that lives nearby and the sweet old lady’s grandson who starts sticking up for her at school.

Then in the present, Scarlett is 28 and an airline stewardess. R.K. Lilley used to be an airline stewardess, so she always kind of throws that occupation into her stories. I freakin’ loved In Flight and the personal touch that R.K. Lilley always uses. Anyways, one day Scarlett sees a man from her past on her airplane and the reader soon realizes that they did not end on good terms.

After that, it’s a constant cat and mouse game, but you’ll constantly wonder who is the cat and who is the mouse. Also, let me put on record that I do not think that Scarlett and Dante have a healthy relationship whatsoever, but the author does a wonderful job making it feel realistic and believable. And by believable I mean they are really toxic to one another, and the reader will be able to feel the hate both of them are feeling towards each other and their situation. I wouldn’t wish their relationship on my worst enemy, but that doesn’t mean I didn’t love reading about it, while being wishful for a happy ending.

“His lips were my own personal hell. They were either his biggest lie, or his greatest betrayer. Every kiss he’d ever given me, when we were in love or in hate, told me how he cared. Told me how he longed. Craved. Pined. Mourned. Despaired. Told me he was as desperate for me as ever.”

I also feel like maybe the title of this book is incorrectly named. I think Breaking Her would have been much more accurate than Breaking Him. Scarlett wasn’t really fooling anyone trying to resist Dante, and maybe it was because we were in her head, but she seemed to be the one that always got her heart broken or feelings hurt, not only by Dante, but by her family and classmates as well. I do believe the next installment is named Breaking Her which is kind of annoying, because I’m going to assume Dante will have more heartache in the following book.

That cliffhanger ending hurt my soul. We weren’t even hinted at a clue! Like, obviously it has to do with blackmailing, but I needed so much more! Plus, there is about a million loose ends. Regardless, R.K. Lilley is such a talented author, and I’ll read anything and everything from her at this point.

2 thoughts on “Breaking Him by R.K. Lilley”