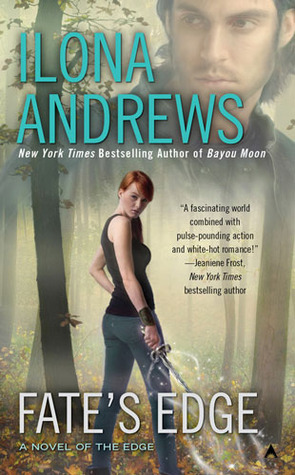 So, Kaldar’s book was everything amazing that I expected it to be, and then so much more! I still think I like On the Edge a little more, but it definitely surpassed Bayou Moon. I mean, this whole series is great, but if I’m ranking them, this comes in at a close second.

I also loved all the different POVs. In Bayou Moon it seemed to only be about Cerise and William, and we didn’t get to see Declan or Rose until the epilogue. In Fate’s Edge we see all the characters quite a bit, and Jack, George, and Gaston are actual main characters along for the adventure. I absolutely loved their involvement in this book.

This series is about the Edge, which is where the Weird and the Broken touch. The Weird has magic, and the Broken does not. They are mirrors, or parallel universes, to each other. So essentially, the people that live in the Edge are between worlds.

We meet our main protagonist, Kaldar, in Bayou Moon. He is Cerise’s cousin from the Mire, in the Edge. The Mire is pretty much where all the criminals from the Weird go that are looking to not ever get caught. Kaldar doesn’t have riches or a noble blood title, but he has more jokes and wit than anyone else in this series combined. After the events in Bayou Moon, Kaldar is looking for revenge while working with the Mirror.

“At the door, Audrey called, “Are you coming?”
“No, just breathing hard, love.” He glanced at her and was rewarded by an outraged glare, followed by, “Oh, my God!”

Then we have Audrey, who thinks she is finally free from her abusive family and happy to be making her own life for herself in the Edge. That is, until her father finds her and begs her to do one more job with him. Audrey is a very skilled lock pick, who feels confident enough to steal anything. Her father promises her that if they break into this pyramid, and steal a special item, that he will completely disappear from her life. He is very desperate for her help, because with the money he can check Audrey’s drug-addicted brother into rehab, even though everyone knows that it won’t help him, because he doesn’t want to be helped. Audrey also had a pet raccoon, Ling the Merciless, who pretty much stole my heart and every scene that she was in.

There are three military factions looking to get back this special device that Audrey stole for her father: The Mirror, who William and Cerise are repaying a ten year debt to. The Hand, who are the bad guys who will get anything, or information, they want with any means necessary. And then we have the Claw, who are the Egyptians looking to reclaim their stolen treasure. Since Kaldar is working with the Mirror, he is assigned to the case to find the missing device and retrieve it before the Hand gets to it.

Kaldar feels like he might need a little help on this mission, mostly to drive a wyvern, so he goes into the Weird to ask William if he would lend Gaston to him. William agrees and Gaston is more than willing to help, but what they don’t expect is Jack and George to be stowaways on this mission.

Jack is scared that he has been out of line, trying to deal with his Lynx, and that Declan is going to send him away to a place that is horrible to changeling children (which Declan would never do). He is trying to get William to plead his case, but William and Cerise have to leave in a hurry to another secret mission (that I’m sure will play a bigger part in Steel’s Edge), so he feels like his only option is to hide and run away with Kaldar, to buy him some time before William gets back. George isn’t going to let his brother run away alone, so he thinks being a stowaway with him is the only option.

Once Kaldar notices his new partners on board, he realizes he has to work with him while keeping them as safe as he possible can (so William doesn’t kill him). They soon find the right lead that leads them right to Audrey, and then an amazing adventure unfolds.

Jack and George really stole this book for me. I love them both and they are such a joy to read about. I love seeing them grow up, because I’ve already got to see them grown in Sweep in Peace. That is actually the reason I wanted to read this series in the first place. I loved Sweep in Peace so much, and then all my friends kept telling me about the crossover. I couldn’t resist and I’m so happy that I didn’t.

And I just have to say that the banter between Audrey and Kaldar is simply amazing. There really isn’t a dull moment between the two. Kaldar is so funny and sarcastic, and Audrey doesn’t miss a beat to say something witty back. Their dialogue was perfect and I loved reading about this duo.

Speaking of duos, Ilona and Gordon are a tier above the rest. There is something so magical about this writing duo, and I will read anything and everything they create.