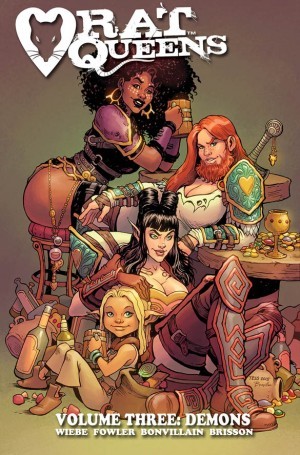 I know a lot of people do not feel this way, but I think Tess Fowler did so much better of a job than Stjepan Šejić. I was so scared to read this, because I found myself so disappointed with the art at the end of Vol. 2: The Far Reaching Tentacles of N’rygoth, but Tess Fowler really impressed me and completely brought my Rat Queens back in a wonderful way!

This trade is mostly about the Rat Queen’s visit to Dunlas, which is home to the Mage University that Hannah used to attend before she was kicked out. Yet, the overwhelming feel and theme is acceptance and how true friends will accept you no matter what and, more importantly, support you. Everyone has made mistakes in their past, and it makes us who we are today. Rat Queens, Vol. 3 does an exceptional job at proving that sentiment, while entertaining the reader with another set of adventures!

I’m now going to break down each chapter in this bind up. There will be SPOILERS, so please use caution in continuing if you have not read this graphic-novel or its predecessors Vol. 1: Sass & Sorcery and Vol. 2: The Far Reaching Tentacles of N’rygoth!

CHAPTER ELEVEN:
We are introduced to Gerard, Hannah’s wizard stepdad in this issue. He is trying to make a case against the Council of Nine, about their corruption, but they aren’t listening to him. Our Rat Queens have been captured by some goblin foodies, and all the panels were beyond amazing. After they escape, the reader will realize they are headed to Dunlas, which is where the Hannah’s old university is, which also happens to be the home of the Council of Nine. We are then introduced to Polle, who is a rather cute old schoolmate of Hannah’s, but all Hannah wants to do is talk to her old professor, Finch, since there has been a university rebellion. We have a huge cliffhanger ending in this issue, with Betty getting paid a visit from an assassin Smidgen!

CHAPTER TWELVE:
Violet breaks up the assassination attempt by kicking down Betty’s door. Betty tells Violet a little about her past, and how she used to be in another group called The Five Monkeys. The team was set up, and Betty is the last -alive- remaining member. We then see Dee is making the most of her High Priestess-ness(?), and is able to look at her family and old home. The girls then leave a comfy inn, to go to a cave that Hannah has a past with. After spelunking for a little while, Hannah talks to a Demon named Hazirel, who’s power she tapped into in Vol. 2: The Far Reaching Tentacles of N’rygoth to save everyone! Hazirel, and some Hell Shades, attack the girls because Hazirel is desperate to acquire Hannah, and the girls narrowly escape him and the cave.

CHAPTER THIRTEEN:
After talking to the Council of Nine, Gerard is in prison, unable to contact anyone. Polle, from Chapter Eleven, saves the girls. Betty meets a mad scientist/engineer who she buys a special sled off of. Violet and Betty take the sled on a test drive, and make a very unexpected friend. Hannah finds Professor Finch, and he fills her in on her stepdad being in prison. Professor Finch does some kind of magic with mirrors and dimensions, and allows Hannah to see her dead mother, Mina. While Dee is searching through tomes, her brother, Senoa, appears.

CHAPTER FOURTEEN:
Mina fills Hannah in on a big mystery from her past; Not only did the Council of Nine kill Mina, but Gerard took care of Hannah and hid it from her, because he didn’t want her to carry the grudge in her heart that he does. Apparently, the Mage University is throwing its five year reunion for his class, and that’s the reason Senoa is there. Senoa, also, happened to be in the same class as Hannah and, one of my favorite characters, Tizzie! Tizzie makes her appearance, and gives Hannah a ring to mask her identity. We also get to learn about a little mystery from Tizzie’s past that I can’t wait to learn more about in later installments. We learn about Betty and Violet’s new friend, Daniel, and Betty is able to ask him a question from Vol. 1: Sass & Sorcery, and my heart swelled with happiness. Then my heart got ripped out of my chest, when the girls discover that Hannah is part Demon. The girls love and accept her, but Hannah storms out before she realizes how loved and accepted she is.

CHAPTER FIFTEEN:
Hannah then channels her inner Brittney Spears from 2007, and completely changes her looks. She decided to not only change her pin-up hair to not cover her Demon horns; she just cuts the majority of her hair off. I know this shouldn’t bother me, but I couldn’t help but be a little sad, especially with how amazing the page looked of her before this transformation. Seriously, sexy succubus lookin’ girls do something to me. We find out Senoa wasn’t a complete scumbag that exposed Hannah’s secret, he was just being possessed by Hazirel, who no longer needs him. Hannah goes, by herself, to talk to the council. They put her in the impenetrable prison, but apparently it’s not impenetrable to demons, because Hazirel makes Hannah an offer for her freedom, after he tells her that they killed her stepfather. I, obviously, do not trust this demon or his information.

BRAGA SPECIAL:
I squealed in fan-girl delight when I saw this was after Chapter Fifteen! It was seriously an amazing surprise, and Braga is my queen, seriously! Yet, we do learn that Braga used to be called Broog and was destined to be a King (or Chieftain). This issue starts out with Braga in Palisade, looking adorable in her bathrobe with her cat, who is telling her lover a story about her past. She was an amazing warrior back then, as well. She was her father’s oldest son and destined to take over his throne, even though she didn’t want it, but her younger brother, Voon, did. Because Orcs are silly and very traditional, the father refuses to give Voon the crown, because Broog/Braga is older. Voon ambushes Broog/Braga and her best friend, Kiruk. Unfortunately, Kiruk is murdered, but it sends Broog/Braga into a bloodlust in which she kills them all except her brother. She drags him back to her father, tells him, again, she does not want to be Chieftain. She then leaves forever, where she will eventually embrace being Braga, and becomes one of my favorite comic book characters of all time.

Overall, I loved these six comics to pieces. I was a little sad that there was no “late game boss”, but, for some reason, the adventures alone were enough for me this time. And let’s face it; you can’t fight a big boss every D&D night. You have to go through so many little adventures, and missions, first. I loved this volume in its entirety, and I can’t wait for the fourth to come out.

I might also be completely biased, because this bind-up is mostly Hannah, her past and all her problems, and Hannah is my favorite Queen.