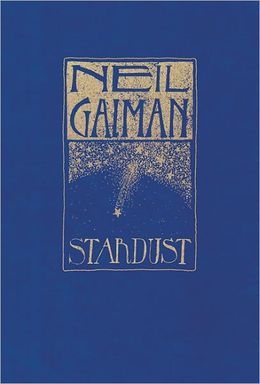 This book was gifted to me from my wonderful Secret Santa, Derek, from the Reddit’s Book Exchange 2016

Neil Gaiman is so praised by my peers that I wanted to finally give him a try. I’ll be honest; the first part of this story instantly hooked me, but the middle portion left a lot to be desired. I was feeling negative, and was pretty sure I was going to give this two stars, while forcing myself to finish it. Then, as soon as Tristran and Yvanie’s paths crossed with Madame Semele, everything picked up and made me fall hopelessly in love with this adult fairy tale.

This is a story about a young boy named Tristran who had a very mysterious birth. His family lives in a town that borders that land of Faerie. No one crosses the wall that separates these two places, until Tristran goes on a quest to prove his love to a girl from his town. The quest is to find and bring back a fallen star, but Tristran becomes very surprised by the adventures that unfold while he is in Faerie.

Even though I’m giving this book four stars, the last 20% deserves more than a five star rating. Seriously, that epilogue was so perfect. I haven’t been able to talk or think about it without getting teary eyed.

Neil Gaiman’s writing is perfect for fairy tales; it’s magical and whimsical, but oh so romantic. Even in the middle section when I was bored, the writing was a joy to read. His words have such amazing imagery that flows absolutely beautifully.

“Every lover is, in his heart, a madman, and, in his head, a minstrel.”

Also, unlike everyone else on planet Earth, I haven’t seen this movie, but everyone raves about that as well, so maybe I’ll have to fix that soon.

This will not be the last Neil Gaiman book I read. I think I will read The Ocean at the End of the Lane next, like my Reddit’s Secret Santa suggested. Stardust really blew me, and my expectations, away. I’m so thankful Derek gifted me this book that I will cherish forever.