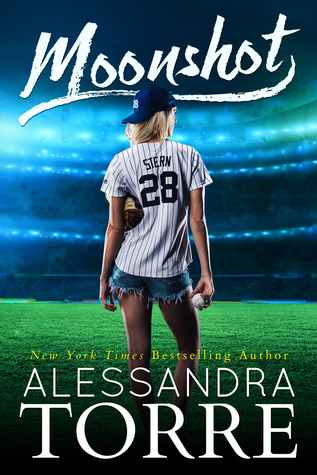 ARC provided to me by author Alessandra Torre in exchange for an honest review.

I’m also buddy-reading this with SueBee and some of the amazing ladies at Shh… [Smut, Heroes & HEAs…] ❤️.

I grew up in a household very involved in sports; playing sports, watching sports, going to sporting events. I also grew up with the Redwings being incontestable, U of M football at an all time high, and even the Pistons were able to win a championship while I was in high school. Michigan is also the home of the Tigers that could never win while I was growing up. I still went to a game every summer with my family, but cheering for the losing Tigers my whole life, who were pretty much the joke of the MLB, felt bad. Obviously the Tigers did pick it up a little, even though we won’t talk about their World Series run, but baseball was just never a sport that resonated as much with me as all the rest.

I couldn’t even picture myself reading a book surrounding baseball, so my immediate expectations of Moonshot were pretty low. I have loved everything Alessandra Torre has written, I just couldn’t help but wish she chose a different sport. When she was sweet enough to give me an ARC, I figured I’d give it a try and just DNF it if I couldn’t get into it.

I was completely hooked and addicted after the prologue.

Tyler, named after Ty Cobb, is seventeen and literally grew up with the New York Yankees. Her dad is a legend on their team and she’s made them all her family since her mother passed away when she was young. She’s a ball girl for them, but viewed as a daughter to most of them.

That is, until Chase Stern is trading to his dream team, the Yankees, after a messy ending with the Dodgers. Because of his time on the Dodgers, and his parting with them, he has a horrible reputation. He’s only twenty-two and trying hard to forget about a secret past of his that still haunts him.

A forbidden love develops between Ty and Chase, and they are forced to hide it from the entire team. Chase makes a very stupid decision, in hopes to forget his past, which makes Ty make an even more stupid choice. The end result isn’t pretty, Ty gets traded, and they end up not seeing each other for four years.

“I gasped, he stilled, and there was a moment of pure fullness, his lips against mine, one sweet kiss that promised me everything, including heartbreak.”

Now, this wouldn’t be an Alessandra Torre book without a few twists you didn’t see coming.

After a few shocks later, and I was able to pick my jaw up from the floor, we learn about a serial killer who is choosing a girl a year – all blonde, all wearing the same necklace, all wearing a New York Yankees jersey. Ty, now married to her childhood sweetheart and owner of the Yankees, believes it is because the Yankees haven’t won a World Series. The murdered girls haunt her, and she thinks the only solution is to win the World Series and the killings will stop.

It just so happens that their best shot at winning, and a deal that they couldn’t pass up, is for her former lover, Chase Stern, to come back to the Yankees.

“Certain loves can’t be fought. The harder you tried, the harder you would be knocked back, over and over again, until it beat you into submission, until your heart caved and body surrendered.”

I will throw a little disclaimer out there that the main protagonist is only seventeen at the start. Even though it never made me feel uncomfortable, I can see how maybe it would someone else. This book also has a lot of infidelity! Again, this didn’t bother me and is tastefully done, but I know a lot of people find that hard to be enjoyable in books. If either of these things are just small hang-ups for you, I would still implore you to give this book a shot.

I loved this book; I completely devoured it in one sitting. Alessandra proves time and time again that she is a wonderful writer and truly is the queen of sexual tension, and this book doesn’t fall short. The story is amazingly crafted, I fell in love with the characters, the pacing was superb, the mystery was addicting, the sex was phenomenal, and the ending was perfection.

2 thoughts on “Moonshot by Alessandra Torre”