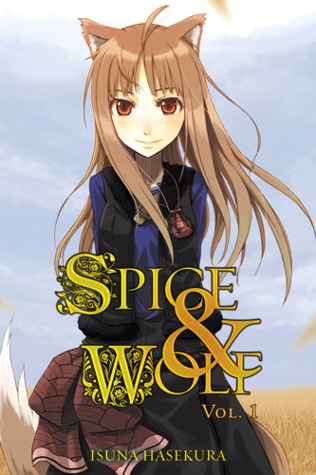 “I’ll always remember that you chose me.”

Lawrence is a traveling merchant that is very trusted throughout the land, even though that land is very heavily controlled by the church, who will do anything to make sure the gods from the past are no longer worshiped. This doesn’t affect Lawrence what-so-ever, until he finds one of these old gods sleeping in his wagon cart after a Pagan harvest festival.

The adorable god he finds is Horo, a wolf god! She can shift between forms, even though it’s not the most convenient of ways, but in human form she is still left with cute little wolf ears and a tail. Her life depends on a sheaf of wheat that Lawrence has in his cart.

Obviously, Lawrence’s new travel friend would cause a problem if anyone found out that she’s really a Pagan god, so Horo is constantly hiding her “special additions”. Lawrence agrees to help Horo get north, while Horo promises to help his sales to earn her keep.

This book heavily focuses on economics, but it isn’t overwhelming. The main sub-plot surrounds the coin system and silver purity. Lawrence and Horo get wrapped up with two companies, with very similar names might I add, that have much more power than they do. This will not be the last time we see these two companies or the church, I’m sure.

This is a romance, but it’s the definition of slow-burn romance. Lawrence and Horo are both such lonely creatures that truly do not deserve to be. I think I want to continue on with this series mostly just to see their happy ending (they better get a happy ending).

This book was much longer and much more thought provoking than I thought it would be. When I saw it only had a prologue, six chapters and then an epilogue, I thought it would only take me about an hour to read. Boy was I wrong. This was actually very meaty, and took me two nights to read. There was a lot to the story and plot, and the character development (as slow as it might be) was also exceptional.

This story read very beautifully, and I feel like it was translated well. I think fantasy lovers would really enjoy this, and it would be a nice place to start if you want to get into light-novels and manga.