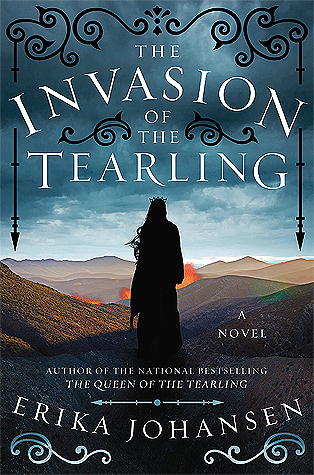 I didn’t enjoy this book more than The Queen of the Tearling. This book felt like it dragged way too much in some parts and I’m not a huge fan Kelsea seeing memories from the past. I understand her necklace(s) is very powerful and helpful, but I just didn’t enjoy this concept as much as I hoped.

Yes, Kelsea can now see memories from a girl named Lily, who lived in pre-crossing America. Even though Lily is rich and married to a powerful man, while most the population lives in terrible conditions, she isn’t safe and lives a very sad life. As much as I really loved Lily’s story line, it just felt too abrupt and jarring switching back and forth from her past and Kelsea’s present.

Kelsea has her own major problems going on – The Mort army is getting closer to her kingdom every day. The Red Queen wants her sapphires and will do anything to get them. All hope seems lost to Kelsea, but her kingdom believes in her and she will go to dangerous lengths to prove them right.

This book has many important and thought provoking topics that need more discussion in our world:
-Women are not alive to just get married and bear their husband children.
-Woman can be raped by their husbands.
-Men do get raped, not just women.
-Sometimes it’s hard to get out of abusive relationships.

This being said, this book has many triggers for abuse, rape, and self harm, so please use caution while reading.

This book also deals with body image in a weird way, which I’m not sure I liked. In The Queen of the Tearling Kelsea is stated as being chubby and plain constantly. Well, in The Invasion of the Tearling Kelsea is subconsciously using her powers to be more attractive. People comment on the change of her looks a lot, and it sort of feels bad to read. Kelsea herself has inner monologues where she understands that men should like her regardless of the way she looks, but she obviously prefers being thinner and more beautiful. I mean, I know most of us would, which is why it feels weird. I don’t know how I feel about this part of the story, but, regardless, use caution if you feel this might be something that would upset or trigger you.

“This, I think, is the crux of evil in this world, Majesty: those who feel entitled to whatever they want, whatever they can grab. Such people never ask themselves if they have the right. They consider no cost to anyone but themselves.”

There isn’t much romance in this book, and what romance is in this book is pretty weak. I’m totally team Pen all the way, without question, but let me just say, for the record, the Fetch is so annoying and lame. Why does Kelsea even have a crush on his circle-talking-ass? Oh yeah, he’s so dreamy looking.

Again, I feel like this story is so unique because of how it is set in the future while also being medieval feeling. This second book helps you understand the history of the Tearling and the events that took place that made the Tearling what it was and what it is currently.

I really think Erika Johansen writes phenomenally and I very much appreciate her take on what could happen to the world we live in today. Her feministic views shine brightly in this book, and I loved every difficult point she brings up. These difficult discussions are so powerful and so needed, and for that alone I would recommend this series.

“There’s a better world out there, so close we can almost touch it.”

2 thoughts on “The Invasion of the Tearling by Erika Johansen”