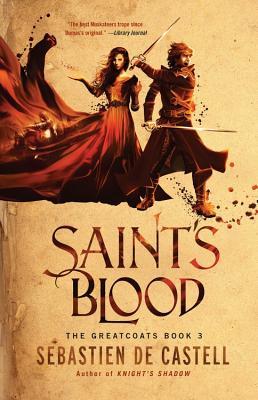 “Rage won’t help you understand death, nor sorrow, and if there’s one thing the dead deserve, it is for their true story to be told.”

I’m actually at a loss for words, because this book, and series, is so close to perfection in my eyes. But, Lord, help me; I’m going to try to review this book anyways.

So, you guys probably like Hamilton, like me, right? Okay, you know in “Burn” how Eliza sings “You and your words flooded my senses. Your sentences left me defenseless. You built me palaces out of paragraphs…”? Well, that’s what Sebastien de Castell does with this book. He literally built his readers a fantasy novel that surpasses any expectations they could have ever had for a fantasy novel. He wrote a series that I will cherish for the rest of my life. He strings together these words that have, somehow, gotten under my skin, and I can’t forget them. Sebastien de Castell has built something that I have no words for, and, like, you know I have to be pretty obsessed to be making Hamilton comparisons.

Like, I never really recommend books to people. I normally just gush about books with others when we’ve both read the same book, or I will just give them my personal opinion on a book and hope they might pick it up. But, for all that is good in this world, please give this series a shot. This series deserves as much praise as The Kingkiller Chronicle, ASOIAF, Mistborn, and every other popular high fantasy book out there.

Have I gushed enough? Probably not, but let’s try to move on anyway.

“Deato mendea valus febletta. The Gods give every man a weakness.”

This particular installment surrounds Falcio, Kest, and Brasti, while they are still trying to save Tristia, a country that doesn’t know how to be saved. This time a new threat is poised at the gang and they have no idea where to even begin searching for clues to solve this impending disaster, because even Saint’s are dying.

This book heavily touches on the evil that is in this world, and the terrible things that people do when they think no one is watching. Sometimes, it’s really hard to think of reasons for the world to be saved when such horrible and cruel things happen. But as much darkness that is in the world, there is always more light and, more importantly, more humans who are willing to do what’s right. I feel like there is a 2016 election, for us Americans, parallel in here.

Religion can be such a beautiful thing, and such an ugly thing. So many wars are started because of religion. People can do horrible things in the name of their God(s). But with faith comes hope, and with hope we can always right the wrongs that happen in this world. Hope is more valuable than all the gold in the world.

“But no man is all one thing; none of us are pure in our beliefs or our devotions. We are all bound by the frailties of our humanity, some of which feed our hatred, some of which, very occasionally, make us want to be something better.”

Falcio and the gang have to see a lot of horrible things in this book, and have to overcome even more horrible things. I love watching the Greatcoats’ journey, and seeing them grow and love in the face of many evils. The cast of character in this series is truly a tier above any other characters, and their empathy never stops astonishing me, their banter never stops making me laugh, and their courage never stops rendering me speechless.

“Nothing lasts for ever, Falcio. Not people, not castles, not even Gods.”

This book broke me. This book killed me. This book, then, resurrected me and gave me life. Then, I read the bonus content and this book ripped my fucking heart out, and now is going to make me wait a year to maybe get it back.

“When you read it, you will know that I loved you even before I was a man, and that you were my Queen even before you wore a crown. You will know that I have spent every day since I first met you trying to become a man worthy of your esteem, and if after finishing this letter you look up at me and smile, it will all have been worth it.”

8 thoughts on “Saint’s Blood (The Greatcoats, #3) by Sebastien de Castell”