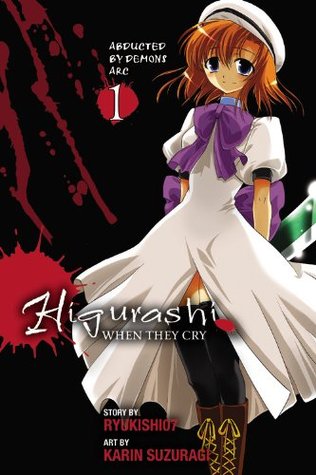 This manga is based off a game/visual novel, that is a very popular murder mystery where you search for clues to find out who is the murderer. And it is also been made into an anime, if that interests you more.

This story is set in the summer of 1983, and stars Keiichi, who has just moved to a small, isolated village named Hinamizawa. There is only one school for all of the children living in this village, and Keiichi soon befriends two girls and the rest of their gaming club! The club starts out lighthearted and fun, with the kids pulling innocent pranks on each other, but when Keiichi discovers that the village might be cursed, the book becomes much darker.

For the past four years, someone has been murdered, while another person has gone missing, on that day of the cotton drifting. And the murders are very, very gory and brutal. This series is definitely not for the weak of stomach or heart.

When Keiichi asks his two best friends about the murders, they either ignore him or play innocent. Their behavior is super suspicious, and makes him question everything.

This was sort of perfect for the Halloween season, because it is for sure creepy and has such an overall eerie feel. The village of Hinamizawa is filled with mysteries on every page, most of which I probably missed, but I cannot wait to try to find out all of its secrets.

Also, there is one (two sided) breathtakingly beautiful full colored page in this volume. I know the artist chose this page for a particular reason, and I’m sure it has a very important impact on the story, but it really is absolutely beautiful. I’ve looked at it about 100 times, studying it.

One thought on “Higurashi When They Cry: Abducted by Demons Arc, Vol. 1 by Ryukishi07”