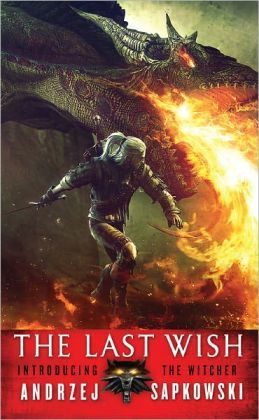 Last summer I became completely obsessed with The Witcher 3: Wild Hunt, where I took screenshots like this:

And once I was finished with the DLC I knew I had to finally read the books to fill the void I now carry in my heart.

This book was translated from Polish to English. It contains seven short stories, and introduces our main protagonist in both games and books, Geralt.

“People”—Geralt turned his head—“like to invent monsters and monstrosities. Then they seem less monstrous themselves.”

The events in these seven stories take place before Sword of Destiny, which is another short story collection, and before Blood of Elves, the first actual full length novel in this series.

Just like the video-games, The Witcher world is so magical, whimsical, full of twists, and it never disappoints. Two of these stories are so very important in understanding why Geralt feels the way he does about two very predominant characters that are talked about in much greater detail later in this world. And seeing Geralt and Yen’s origin story gave me all the feels (sorry Triss fans, but gtfo.)

I’m going to break down each story with my personal feelings and beliefs. There will be SPOILERS ahead! So, please be cautious while reading, if you have not read this short story collection and do not wish to be spoiled on the events that lead up to the main story and video-games!

“In order to become a witcher, you have to be born in the shadow of destiny, and very few are born like that. That’s why there are so few of us. We’re growing old, dying, without anyone to pass our knowledge, our gifts, on to. We lack successors. And this world is full of Evil which waits for the day none of us are left.”

1.) The Voice of Reason
This story starts out in true Witcher fashion: with Geralt having sexy time with a random girl! We are also introduced to Geralt’s notorious sidekick, Dandelion the Bard. Geralt starts to speak up about how hard it is to be a witcher and make a living off of it. When upon leaving, a man approaches Geralt and pretty much forces Geralt to fight without being able to touch his opponent. Geralt quickly proves how smart and cunning he truly is, and why he makes this series so addictive to read and learn about.

2.) The Witcher
Geralt goes to a new town, where a king has gotten his sister pregnant seven years ago. Sadly, the sister and the child died in birth, but the child is now awake, and seems to be a werewolf, and is causing chaos in the town. Geralt is sent to kill her, but someone gives him a tip that if he prevents the werewolf from going back to its coffin for three days, she will turn into an ordinary girl. He is also bribed to run away, but Geralt, being the outstanding and honorable man he is, uses the briber as bait instead! Geralt is able to hide in the girls coffin for three nights, and she turns into the regular girl on the third morning!

3.) A Grain of Truth
The imagery of this story really is a tier above what fantasy normally gives us nowadays. Geralt is traveling once again, and finds two bodies that appear to have come from an abandoned mansion. Upon further inspection, a cursed man named Nivellen owns the house. He was cursed by a priest to become a beast, but the house obeys his every wish. Traveling merchants even come from all around and trade their daughters to him for a period of time for currency. Nivellen has tried everything, and the curse is never broken! But when his newest girl, who ends up not being all of what she seems and who was responsible of the two bodies Geralt originally found, starts a fight with Geralt, Nivellen is forced to help him, and the curse is broken. Yes, this is legitimately a wrapped version of Beauty and the Beast.

4.) The Lesser Evil
Again in a new city, Geralt killed a monster and is looking for compensation. He goes to see a mage that he knew from before, and he asks Geralt to kill “a monster” for him. The monster ends up being a young girl, and when Geralt talks to her he realizes she is seeking vengeance for what the mage did to her. After her and Geralt “get to know each other”, she promises to back down because nothing good will come of it. Geralt awakens in the morning and realizes that she lied. He knows where she will be, so he meets her and ends up having to fight her. He wins, and she must die, but Geralt faces the question of what is truly evil, and refuses to let the mage to take her body.

“Only Evil and Greater Evil exist and beyond them, in the shadows, lurks True Evil. True Evil, Geralt, is something you can barely imagine, even if you believe nothing can still surprise you. And sometimes True Evil seizes you by the throat and demands that you choose between it and another, slightly lesser, Evil.”

5.) A Question of Price
This story completely blew my mind, and probably has the biggest life changing event for Geralt in it. Again, Geralt is traveling and meets with Queen Calanthe, and she tells him what she truly thinks of witchers. During the party where this meeting is taking place, a knight comes and demands Queen Calanthe’s daughter, the princess, which he has earned. Sadly, this knight is also cursed, but Geralt is able to lift the curse. The knight is then able to marry the princess, but Geralt knows they have been seeing each other for some time, because the princess is pregnant. They ask Geralt what he would like for payment, and he gives a very veiled response, and says that he will be back in six years time to see if he is lucky. This is 100% his adopted daughter Ciri! She is my second favorite character, only to Geralt, in all the games, and she completely changes Geralt’s (and Yen’s) life forever. Knowing what I know from the games, this story was oh so special to my heart.

6.) The Edge of the World
Geralt and Dandelion have stopped and are looking for work. A local tells them about a devil who is up to no good. Side note, I listened to this on audio book and the devil’s voice made me want to murder someone. Good Lord, please, never do this if you are a voice actor. Anyway, the devil, named Torque, likes to play games and Geralt and Dandelion end up being captured. When they awaken, they find themselves among elves, still tied up, and hear all about how the elves want revenge on humans. The Queen of the Fields comes and saves them, and tells Geralt that he is destined for greatness and that they will meet again.

7.) The Last Wish
Be still, my heart – this chapter was everything I never knew I wanted in my life. Again, Geralt and Dandelion are together and decided to fish up breakfast. Dandelion ends up fishing up a djinn, or genie, in a magical vase. It ends up hurting Dandelion, and Geralt says what he thinks is an exorcism to make it stop. Dandelion takes a turn for the worst, and Geralt knows he has to act fast. He rushes Dandelion to a town, where he is informed that his best chance at survival will be a sorceress named Yennefer. Yes, this is their origin story, and it ends up being everything I ever wished it to be. Yennefer is able to heal Dandelion, but she has an alternative motive; she wants to harness the genie’s power for herself. She also demands payment from Geralt, which she receives by possessing him to publicly punish men who have wronged her. He wakes up in jail, where he tells a mean guard to blow up, in which he does. Geralt doesn’t have any time to think about this, because Yennefer comes to town with the genie, which is destroying everything. Geralt is able to save the townsfolk, but while trying to save Yennefer herself, she refuses, and it looks like she would rather die trying to take the genie’s powers. Geralt then realizes the reason Yennefer couldn’t possess the power was because the genie is viewing Geralt as its master, and he has accidentally made two of his three wishes. Yennefer urges Geralt to make a third and final wish so she can try, but Geralt knows that the genie will kill her once the request leaves his lips. Geralt then makes his last wish, which none of us know what it truly is, only that it binds him and Yennefer together forever.

We knew Geralt fell in love with Yennefer as soon as he laid eyes upon her. There are so many theories of what he wished for, but I do not think we will ever get a confirmation. He could have wished for Yen to love him, but that is so un-Geralt, I can’t believe he would ever do that. He could have wished for them to have a baby, and since witchers are sterile that could be why Ciri comes into their lives, and would have still protected Yennefer from the genie. Hell, it could seriously be as simple and binding their lives together forever, which is why, throughout the games, it feels like the go through the same things together, even when they are not physically together. We will never know, but I sort of think that’s beautiful all in itself.

“Love and blood. They both possess a mighty power. Wizards and learned men have been racking their brains over this for years…”

This world, these characters, these adventures, all of it is truly above all the expectations I set before reading any fantasy novel. This is something special, that I can’t form the perfect combinations for words to be able to praise this enough. Please, give this world a try, whether it be the games or the novels, because this kind of perfection is beyond words.

Oh, and this book totally ends with Geralt and Yen having crazy “oh my God, we are alive still” sex, and I wouldn’t want it any other way. Also, Dandelion is such an innocent little cinnamon roll, I can’t deal.