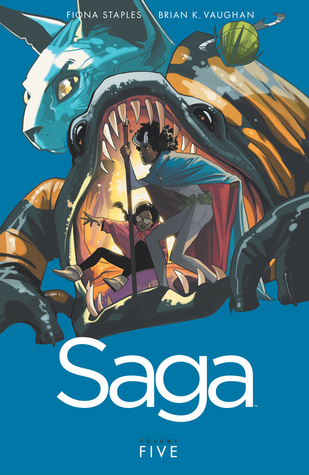 “Each new person we welcome into our hearts is a chance to evolve into something radically different than we used to be.”

This was my favorite volume, to date. And I say this in all of my Saga reviews, but Brian K. Vaughn is such a genius to make the voice of this comic the adorable daughter we know and love named Hazel. I feel more for this little hybrid cinnamon roll more than I do for most people I know in real life. Seriously, I want nothing but the best for her and I will constantly buy this comic just to ensure her happiness.

This bind-up also had my favorite page of any issue of this comic yet:

With that caption, too, this page honestly broke me.

I think that’s the main theme of these six issues: sacrifice. And Brian K. Vaughn doesn’t hold back with the feels. At least one, if not all, of the different examples of sacrifice will resonate with you, and it will hurt. Whether you’re a parent, a sibling, or just a friend, Brian K. Vaughn is a master at empathy and it really shows on these pages.

Loss is never easy, but loving someone with the sum of who you are isn’t easy either.

I’m now going to break down each chapter in this bind up. I mostly do this so I can go back and refresh what has happened in which specific issue. There will be SPOILERS, so please do not continue if you have not read this graphic-novel, Vol. 1, Vol. 2, Vol. 3, or Vol. 4!

CHAPTER TWENTY FIVE:
We are thrown back into this amazing world, and then are immediately reminded of the terrible things that happened at the end of Vol. 4. Dengo is still with Alana and Klara, and has full control over Hazel and Prince Robot IV’s baby. They all have been separated from Marko for three months now. Marko is with Prince Robot IV, Gus (the cutest character in the world), and Yuma (Alana’s old drug dealer). Far away, the Will is still sick, but Gwen, the Brand, Sophie, and Lying Cat are looking for a dragon to collect magical sperm that will heal him.

CHAPTER TWENTY SIX:
Dengo tells a terrorist organization, The Last Revolution, where they are located and they come to take a look at Hazel to see if she is really the product of two people who are forbidden to breed. Dengo suddenly realizes that he has probably made a grave mistake by telling them their location. Meanwhile, Yuma finds more of the drug called fadeaway, and she and Marko decide to try it.

CHAPTER TWENTY SEVEN:
Marko and Yuma got a bad batch of fadeaway and are being haunted by their pasts. Gus and Prince Robot IV finds them, sees that they are both probably going to die from the drugs, and have to make a call to find out how to save them.

CHAPTER TWENTY EIGHT:
The Brand and Sophie have a heart to heart, where the Brand lets it slip that her real name is Sophie, too! The Stalk’s brother finds them and gives them an ear drum that is supposed to help them track her killer. He then gives them a tip on how to locate the last remaining male dragon, so they can collect his sperm. The Last Revolution has found a buyer for Hazel. Marko and the gang’s ship is under attack by the Royal Guard. There is a gas leak, which Gus was going to sacrifice himself to fix, but Yuma does instead.

CHAPTER TWENTY NINE:
Upon talking to the buyer, The Last Revolution realizes they are no longer going to be able to work with Dengo, because of his race. Dengo finally does what is right, and tries to help Alana. Marko and the gang barely get away from the Royal Guard, and because Gus has been tracking Friendo, Hazel’s pet walrus, they crash land in that direction. The Brand, Gwen, Sophie, and Lying Cat finally find the cave that the male dragon is residing in, and find him in a very compromising position. Sophie feels responsible for the Will’s injury, so she wants to collect the specimen, but, sticking with the theme of sacrifice, the Brand ends up dying to save Sophie.

CHAPTER THIRTY:
Because of the crash landing, Prince Robot IV looks in pretty bad shape. Hazel is with Klara, while Alana is carrying Prince Robot IV’s baby and is with Dengo trying to escape the ship because they think Hazel and Klara are already off of it. Obviously, they end up being wrong and Hazel and Klara blast off in the ship with what is left of The Last Revolution people. Marko finally meets back up with his wife after being away for so long (this is the scene of my favorite art panel). Prince Robot IV takes matters into his own hands, and kills Dengo. Sophie and Gwen are able to heal the Will, who wakes up very angry, because he feels like his sister died trying to save him. And then the mother of all cliffhangers happens, when we see Hazel in school with other hybrid children! “Together, my parents had learned to be much more than “the sum of their parts”, whatever that means. Separately, they were kind of just a mess.”

Saga is so very good, and so very addictive. Again, it proves why it is the best graphic-novel out there right now, and I cannot wait to continue on with Vol. 6.