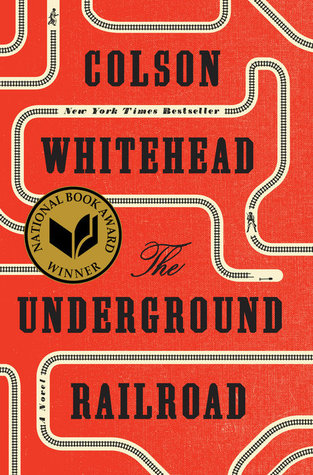 The Underground Railroad was the group book for #DiverseAthon, which was held from the 22nd to the 29th of January 2017!

This important and very needed readathon is being hosted by Christina Marie from Christina Marie, Joce from squibblesreads, Simon from SavidgeReads, Monica from shemightbemonica, Mara from BookMarauder, and Naz from Read Diverse Books!

“And America, too, is a delusion, the grandest one of all. The white race believes–believes with all its heart–that it is their right to take the land. To kill Indians. Make war. Enslave their brothers. This nation shouldn’t exist, if there is any justice in the world, for its foundations are murder, theft, and cruelty. Yet here we are.”

This powerful and moving story starts out by introducing us to a woman named Ajarry, who was uprooted and stolen from West Africa and sold into American slavery. Later, she has a daughter named Mabel who is somewhat famous for being a successful runaway slave, but the victory is heavy on the heart, because she left behind her own daughter, Cora.

The story’s main protagonist is Cora, and we follow her through an actual underground railroad, not metaphorical. Every stop Cora makes feels like a brand new world, but the fear of being caught never truly subsides.

Trigger warnings: graphic violence, abuse, and rape. And MILD/MINIMUM SPOILER WARNING: nothing major, but please use caution before reading if you’d like to go into this story completely blank!

“Stolen bodies working stolen land. It was an engine that did not stop, its hungry boiler fed with blood.”

Georgia – This is where Cora starts her life. She is dealing with a broken heart from abandonment, and unwilling to get close to anyone. We get to see, first hand, how truly terrible slavery is and how some scars don’t leave a mark. Others get many, many, cruel and unjust marks. This is truly the most heartbreaking of all the places Cora lives. The Randall Plantation is a place of nightmares, and I hope that everyone reading this story realizes that this was an actual reality in our country for so many. Thankfully, another slave named Caesar asks Cora to run away with him, because people believe that Cora is a good luck charm because of her mother’s successful getaway.

South Carolina – This is the first stop with Caesar, and the first time Cora is lulled into a false sense of security. Sadly, not all of the blacks are treated as well as Cora was. We are also introduced to a slave catcher named Ridgeway, and Cora is forced to run, but this time by herself.

North Carolina – This time Cora is by herself when she is taken in by a couple that is very scared that they will eventually be caught housing slaves. Martin and Ethel Wells make Cora’s time with them feel like a prison, until Ridgeway finds her again.

Tennessee – Ridgeway takes Cora here, because he has another slave to catch. Cora finds out that slave owners and catchers care a great deal about the message of bringing a slave back to their owner/plantation, because it relays a message to other slaves and diminishes their hopes of running away, where Cora’s mom gave very many slaves hope. Cora ends up fleeing with a man named Royal.

Indiana – This is the best place Cora has named a home. She is living on the Valentine’s farm with a large number of escaped slaves that are just trying to make a new life for themselves. Cora shares a house with a mother and a young daughter who she grows very attached to. Cora also allows herself to fall in love and begins healing from the years of abuse, trauma, and fear she has had to live. Cora, also, falls in love with reading and education, and I felt such happiness and hope for her. But as we learned from South Carolina, it is dangerous to ever feel safe as a runaway slave, even if your plantation owner has died. Cora is again forced to flee, this time leaving many pieces of her heart behind.

The next, and second to last, chapter of this book is in Cora’s mother’s point of view. It was heartbreaking, and I could barely read with the tears that were constantly blocking my vision. If this book ended on this chapter it would have been an easy five stars. My heart breaks for Ajarry, Mabel, Cora, and every single family that has been impacted by the horrible violence and violations from slavery.

Also, the prose and metaphors in this book are truly in a league of their own. Colson Whitehead has crafted such a unique and important book, and his talent seeps through and onto the pages. I will recommend this to everyone and anyone.

But I truly disliked the last chapter of this book. I’m not saying that every book needs a happy ending, but I’m not the biggest fan of open ended endings. From being such an impactful and meaningful story to then juxtaposing a bland and open-ended ending just felt wrong. I could completely be in the minority with this feeling, but I’ve been thinking about this ending for a couple days and it upsets me every time.

3 thoughts on “The Underground Railroad by Colson Whitehead”