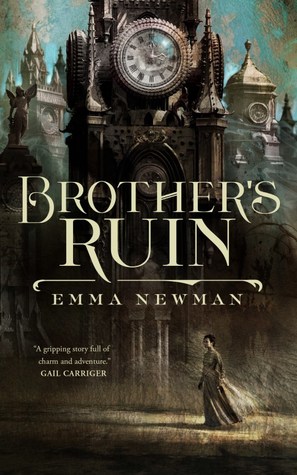 I truly believe this is the start of something that is going to be amazing; unfortunately this first installment into this world wasn’t quite as gripping as I’d hoped.

This novella takes place in 1850 Great Britain, and has a very important emphasis on the lack of women’s rights that takes place during that time. Our main protagonist, Charlotte, is a very talented illustrator, but she has to sell her work under a man’s pen name. Of course the small amount of money she is making is only to help her brother, who she loves very much, and is only until she is married off to her stable and reliable fiancé.

Charlotte’s brother, Ben, has tried to go away to school to pursue his love for engineering multiple times, but always is forced to come home because he gets very ill when he is away. Charlotte always does everything in her power to take care of him while he is home, but the financial stress from paying for his schooling has impacted their family very much.

Charlotte’s father has taken out a very risky loan, which he is unable to pay back. Once Charlotte learns of his position, and the position he has put their family in, she is determined to try and fix things herself.

Unfortunately, her father has already taken matters into his own hands and has very selfishly tried to fix things, because he believes that Ben has magical powers, even though it is truly Charlotte that is harboring the secret of her magical powers from the world.

Also, enforcers will come and take children and adults that have magical abilities, without having to be informed. They claim that if a person goes too long without training their powers they will “go wild” and hurt others and themselves. They are taken to be immediately tested, with or without their consent.

Yet, when a parent informs the Royal Society about the chance of their child having magical abilities, their magi will come to your house and perform three tests to see how powerful the child is and how useful they will be for their personal college.

Once Charlotte’s father informs the Royal Society of Ben’s powers, Charlotte finds it necessary to help her brother with the three tests he is given to prove his magical worth, because Charlotte is scared of what will happen to her brother and the rest of her family if her brother fails them all. And, obviously, the better he does on the tests, the better the offers will be to fix their parent’s financial situation.

Oh, and all of this is going on while a somewhat murder mystery is going on, too! Charlotte is tangled up with one of these magis, in something that is much bigger than both of them realize. This subplot really is the reason I have such high expectations for the Industrial Magic series, and I look forward to what the next one will bring.

Also, I touched on this above, but there is a good discussion to be had from this book and what it means to be a “good woman” and what the “woman’s place” was like in the 1850’s. I really appreciated it, and it shows how far we’ve come, but how much we still need to go. TL;DR – there are feminist undertones throughout this book and it’s really amazing.

I really enjoyed this novella, and found it to be very fast-paced, especially with that ending. I’m only giving this three stars, because it felt like a starter story, where the author is telling you all the information you need to know before entering the actual heart of the story, but I have really high hopes that I would end up giving the next book in this series a much higher rating. I’m actually very interested with continuing on, and I have nothing but high hopes.