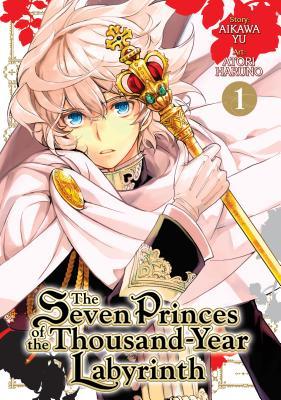 Ah, okay, I’m in love. I know I haven’t read that much manga, but Seven Princes of the Thousand Year Labyrinth is, hands down, my favorite. Like, nothing has even come close. It was whimsical, action packed, intense, mysterious, funny, and all around just amazing. Seriously, this deserves all the stars! The basic premise of this is that the Emperor of the seven lands has passed away, and the seven Lords of those seven lands find themselves trapped in a medieval castle. Inside the castle that was thought just a fantasy, the Lords are met with constant rising water, traps, puzzles, and riddles, that they must figure out or they will lose their lives. Together they must decide who will be the new Emperor.

Upon a few trials and while the group is still just meeting, a body is found of one of the Lords, without anyone having even spoken to them. This quickly spirals the story into a murder mystery where we are trying to find out which of the boys has committed the crime, while also trying to keep the lives they have, while also trying to choose a new Emperor.

All seven of these young men are not just princes of their land, but they are also masters/prodigies of a certain thing:
➽ Laurence Ackroyd – Master of martial arts, unbeaten champion, and my soon to be husband.
➽ Titus Ram – Leader of a band of thieves, has been living in imprisonment.
➽ Messiah Reed – Master Detective, who captured Titus before this adventure.
➽ Zan Audubon – Very beloved singer, who is also blind and never forgets a voice.
➽ Gideon Redfield – Prominent public rights activist, was the front runner for the throne.
➽ Amadeus Frockhert – Student body representative and top mathematics student.
➽ Katherine/August Morgan – From the wealthiest merchant family, also keeper of this mysterious castle, and also harboring a pretty big secret.

There is also a boy trapped in the castle that wasn’t a Lord to begin with, just a student who caught the Lord of his land’s eye. This is the main protagonist of this volume, and he truly is a little sweetheart:
➽ Ewan Juno – Student from the island, typical normal/ordinary guy.

I couldn’t help but find myself completely addicted to which candidates will make it out to still be able to rule the seven lands in this world, and which candidate will rule all those Lords as the new Emperor. This was such a good volume, and I would completely recommend this to anyone who is a fan of the video game series Danganronpa.