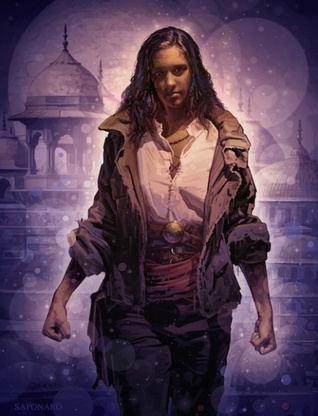 Readalong for the BooktubeSFF Awards which is being hosted by Adriana from Perpetual Pages, Chelsea from TheReadingOutlaw, Samantha from Novels and Nonsense, Connor from Connor O’Brien, Elizabeth from Books and Pieces, Kaitlin from Kitty G, Sam from Thoughts on Tomes, Elena from Elena Reads Books, and Thomas from SFF180!

First and foremost, I haven’t read The Way of Kings or Words of Radiance, and I know this had some spoilers for me and I’m a horrible person, but I really needed to read this for the BooktubeSFF Awards. Plus, after reading I don’t really think it had that many spoilers. Like, I know there is obviously a resolution that happened after book two, and I know a new Desolation is about to cause a bunch of havoc in Oathbringer, but I still think I can enjoy all the books and still know very minimal. (Art by Marie at jurassicpencil!)

This story surrounds a side character named Lift, who is freakin’ awesome! I was a little apprehensive, knowing that the main character was going to be a twelve-year-old, but she completely won me over and quickly. I also loved her spren, Wyndle, who is a plant elemental, which everyone knows I’m a sucker for any magical companion! They were such a cute pair, and I loved the visual of them traveling together, on the hunt for different kinds of pancakes.

The adorable pair travel to a new city, where Lift is very adamant about using her Edgedancer powers so she can catch the attention of a man named Darkness, who she believes is hunting someone else who has powers. During her stay in the new city, she meets a strange woman that runs an orphanage for sick children who are no longer wanted.

Darkness was a wonderfully complex villain, especially for only a 130 page story. I never thought he was purely bad, just significantly misguided, and I really can’t wait to actually read this series so I can read more about him and his questionable direction.

The only negative thing I will say is that I understand that Lift is young, but I’m not sure how problematic/unproblematic the mental health topic is in this book. I’m not the best judge of this, but a few of the things said in this book seemed like they could at least make someone else feel uncomfortable, so I think it’s important for me to note it.

Overall, I really enjoyed this and it made me really hyped to start The Way of Kings! This was a really beautiful story that warmed my heart and made me giggle on many occasions. Lift and Wyndle were so easy to love, and I want to know anything and everything about them!

6 thoughts on “Edgedancer by Brandon Sanderson”