“The Reaper has come. And he’s brought hell with him.”

For those of you unfamiliar with Red Rising, even though I might be the only one left at this point, in this world that takes place in our universe, starring a young man from Mars, everyone is subdivided into color categories based on their skill sets, income, hair color, and what last name they possess (information provided by the Red Rising Wiki page):

Darrow, that young man that was born and raised in the mines of Mars as a Red, has some pretty traumatic things happen to him in Red Rising that has lead to him being the main tool in a rebellion for equality among the colors.

I enjoyed this and Golden Son more than Red Rising, and with the heartbreaking cliffhanger at the end of Golden Son I couldn’t resist immediately picking up this conclusion novel. And I’m so very thankful I did, because this book was such an immersive and addicting read.

This being the final novel in this series, the rest of this review is going to contain SPOILERS. I’m not going to say exactly what happened, but you will obviously know who has lived and who has died, and you’ll also have a pretty good idea about who was fighting for what side. Please do not continue on if you haven’t read this series, or if you do not wish to be mildly spoiled.

That ending. That freakin’ ending. That ending was everything. Like, my crops are watered, my family is fed, and my skin is clear perfection. I don’t think I’ll ever get over this ending.

Okay, so the middle of this book was very slow for me. Not that I don’t love and have a soft spot for the Obsidians, and I know that story line was important to the end, but I was forcing myself to keep reading. I was pretty convinced I was going to give this a not so great rating, but that ending happened, that ending was everything.

The ending of this book is honestly up there with The Hero of Ages for me. This conclusion was a perfect way to end this trilogy, and I feel almost at a loss for words, because I honestly believe Pierce Brown wrapped this series up perfectly.

Even though the ending was perfect, and I loved the beginning where we get to see the consequences of Golden Son’s cliffhanger, like I said above, I was extremely bored during the middle of this book. And even though I recognize the importance of that middle section, I still can’t bring myself to give this five stars, even though that ending was everything I could ever wish for in a book and I simply cannot stop gushing or thinking about it.

I also want to mention that I still hate Roque and I absolutely hated the way Darrow was impacted by his death. Like, gross. Please stop.

I was also pretty upset with Ragnar’s death. I gushed about him pretty hard in my Golden Son review, and I just think his character deserved better. I know that this story is essentially about an intergalactic war that is ever approaching, and that it is unrealistic that everyone makes it out alive, but I just wish it wouldn’t have been him.

“Our lives mean so much more than the frail bodies that carry them.”

But besides the ending, I did love many other things about this book and series:
➽ I loved the obvious social issues this book touches upon that mirrors our society that the people we place in power today. Obviously it’s not as drastic as the difference between Reds and Golds, but maybe one day it will be. Hell, 2017 has been pretty depressing so far.

➽I loved the constant reminder of how important friendships are. I also loved how this book actually portrays friendship, and how you will fight with your friends when you believe they are doing something that is wrong. That’s real and good friendship; wanting that person to be the best that they can be and that sometimes means calling your friends out on things. Sevro and Darrow are friendship goals.

➽I loved the importance of Darrow constantly building his social network. The whole spectrum of colors won this war, not just Reds and Golds. It was so believable the way Darrow made more and more connections and more and more important people and leaders believed in him and his cause. It wasn’t just a forced happy ending where everything works out (I’m looking at you ACOWAR), but it was a constant struggle and battle, which Darrow worked very hard to achieve.

➽I loved the cannibals from the ship crash. It was so scary and atmospheric; I was on the edge of my seat constantly. Which probably also helped to make the part right after the cannibals boring.

➽I loved the realistic villains in this story, and even though they were horrible people, they were amazingly written characters who were all very believable reasoning for their actions. Also, the Jackal wearing that rib-cage broke me. Such a convincing and utterly downright scary villain.

➽I loved Mustang/Virginia and her character growth since Red Rising. I know a lot of people have problems with her manipulating Cassius and keeping a big secret from Darrow, but this is a time of war and she has had to watch every man she has ever loved be evil. I totally get her not trusting anyone and doing some shady things to win a war. I’m not saying it is right or ethical, but it is believable. My heart bleeds for her character and what she had to watch her family become. I weep for everything she has given up in the face of justice, equality, and love. I feel like Pierce Brown wrote such a spectacular female character that is strong yet compassionate, beautiful yet brutal, merciful yet proactive, and so very real. She is one of my favorite characters of all time. 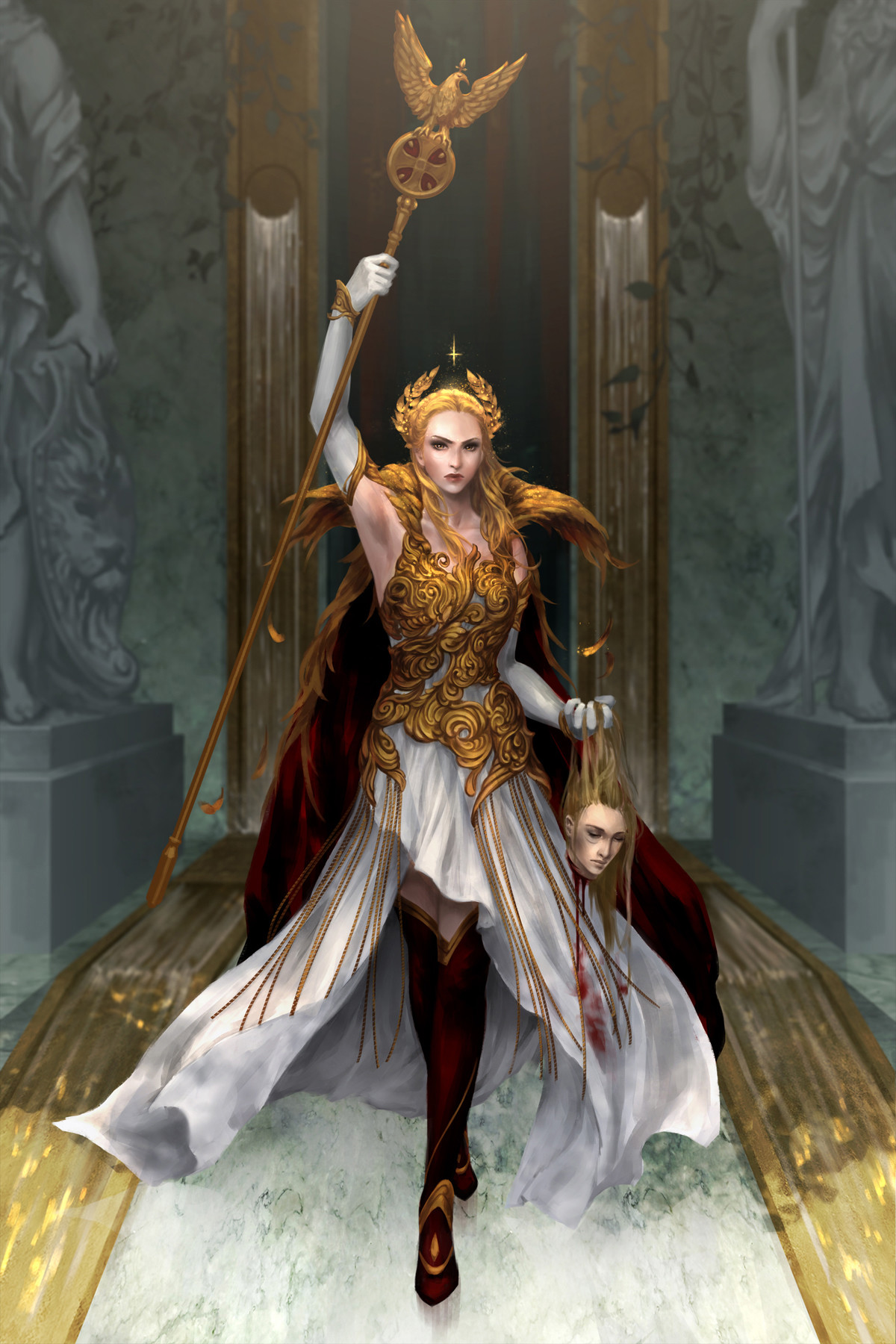 I would completely recommend this series to anyone who has a love for SFF. I also have nothing but high hopes for the rest of Pierce Brown’s career, and I cannot wait to read Sons of Ares this month and Iron Gold upon release next January.

And I want to give a huge thank you for all my friends that encouraged me to continue on with this series, when I was being very apprehensive over Red Rising. And I want to give an extra special shout out to Gelisvb for letting me bounce all my feelings off of her, and for letting me gush and cry and rant nonstop to her. Seriously, she’s amazing, please go friend request and/or follow her! 💖

“They call me the Morning Star. That star by which griffin-riders and travelers navigate the wastes in the dark months of winter. The last star that disappears when daylight returns in the spring.”