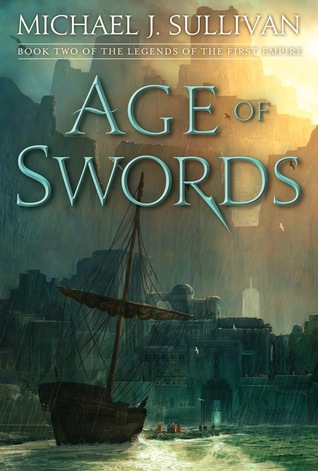 “Every life is a journey filled with crossroads. And then there are the bridges, those truly frightening choices that span what always was, from what will forever be. Finding the courage, or stupidity, to cross such bridges changes everything.”

It hurts my heart, but I didn’t love this one as much as I loved Age of Myth! It was still a really solid addition to an epic fantasy series that I know is going to continue to be one of my favorites. And this book still follows some of my favorite characters of all time, while also introducing us to some new faces and even new races! Be still, my dwarf loving heart.

This series is set 3,000 years before Michael J. Sullivan’s Riyria Revelations, but this series is meant to be read separately and there will be no spoilers if you haven’t completed it or even started it. I’m guessing it will only add to the reading experience, but you won’t be hindered going in blind, like me.

Age of Myth is the book that starts this epic tale, where we get to see many different characters, with their own perspectives and paths, be woven together because of a war that shouldn’t be happening in the first place. We have a recently dead Chieftain’s wife of one of the Rhunes (humans) clans, who is now forced into the role, even though other men want to constantly fight her for it, yet she is without a doubt the best person to lead. We get to see a young girl and her sidekick pet wolf, who have grown up in the magical forests in this world and has more power than she even knows. We learn about the Fhrey (elf) clans, who believe themselves Gods, and we get to see their inner turmoil and we also get to focus in on one unbelievably strong woman who is forced to make tough choice after tough choice. Lastly, we get to follow a poor Rhune man, who hasn’t had the easiest of lives, forced into choosing between running forever or saving the very people who have stripped him of his faith in humanity all his life.

“Losing leaves a bitter taste that lingers long after the sweetness of victory has been forgotten.”

Yet, in Age of Swords we get to see these characters develop more, while also seeing a few side characters shine just as brightly. As I said above, we learn about Dwarves, or Dhergs, or Belgriclungreians, who are nothing short of amazing. We get to see disabled representation, and the way that uncivilized human clans, and some of the world leaders we have today, treat those individuals. We also have representation of a surviving girl, coping with her pain and grief, unable to be touched by others, becoming one of the most important Rhunes in existence with her craft. We get to see the primal beauty of a girl learning to craft a written language so her, her clan, and her family’s stories are never forgotten. We get to see a woman who was only valued for her beauty, become the warrior she has always wanted to be. And lastly, we get to see a young Fhrey boy coming to terms with the power he holds, while also being given the choice of what kind of leader he wants to be. Oh, and we get giants and demons and dragons and old gods, too!

Have I sold you yet? Because Michael J. Sullivan truly crafts some completely unforgettable characters. The magical girl with the wolf sidekick, Suri, is one of my favorite characters in all of literature. She is written expertly and impossible not to love. This series is worth a try just for the privilege of meeting her alone. I don’t mean to gush about Suri, but she is so important to me and it’s downright impossible to not gush about her! And in general, Michael J. Sullivan writes some amazing and strong female representation that is sometimes hard to find in high fantasy.

“Funny how things that shouldn’t matter actually meant so much and how things as permanent as homes moved.”

I feel like I can’t say too much without giving away spoilers, but my favorite scenes in Age of Swords were, hands down, the ones with the quest inside the mountain. They were so amazing, and I felt like I was right there and a part of the adventure. I also felt so many Hobbit feels and I was completely living for this entire journey.

I also love the message about how the Fhrey and Rhune clans are divided. See, the Rhunes are split up into seven clans because they live in different regions, but the Fhrey are split into seven clans completely based on power and privilege. The Fhrey honestly have a working class at the bottom and a class that believes themselves Gods at the top. There is a huge discussion in this book about how the highest clan wants to keep the lower clans down, and it is a really important message that I think many people could see parallels in to our actual world today. I really appreciated it, and I loved reading about it.

“The gathering that changed the course of human history was nothing more than a circle of chairs filled mainly with stupid, vain men.”

Speaking of the Fhrey people, Michael J. Sullivan is going to torment me until book six about the mysterious door, isn’t he?

This world is huge in this book, which means there is a lot of world building, and I completely understand the necessity of making this story cohesive, but I just felt myself not as invested in some of the other storylines as I would have liked. Again, Suri’s storyline is my favorite, and I also really enjoy Persephone’s, but the rest just fell a little flat for me.

Yet, even with all of this being said, not that much happened in this book. There were very few exciting moments, but for the most part this book just felt mostly boring to me. I simply couldn’t put down Age of Myth, but I mostly made myself pick up Age of Swords. I know this book was setting up important ground work for the rest of the series, which I wholeheartedly appreciate, but it’s ultimately the reason I have to give this a lower rating.

I still completely recommend this series, and I truly believe with my whole heart that this is going to be a series I carry with me forever. The characters, the messages, the greater picture at hand, all of these things are building up into something unforgettable, and I can’t wait to get my hands on Age of War!

“Persephone had been so fixated on getting swords that she never considered the perils of where the path might lead, or what she’d need to suffer to travel it.”

7 thoughts on “Age of Swords (The Legends of the First Empire, #2) by Michael J. Sullivan”