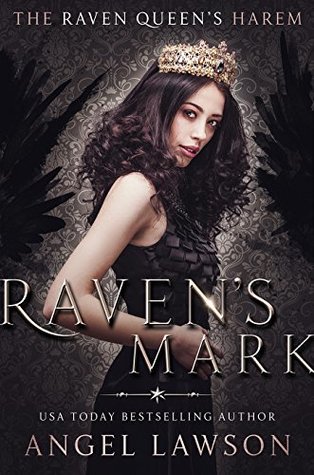 Okay, let me preface this review by saying that I only picked this book up for three reasons:
1.) I needed something for a mythology quest for a readalong I’m taking part in, #TheReadingQuest.
2.) This was only 115 pages.
3.) This was only 99 cents on Amazon.

The mythology behind this book is based on The Morrígan from Irish mythology. Morrígan is said to be a phantom-like banshee queen that is associated with anything war. And she is often represented by a black bird, some say crow and others say raven. There are so many different interpretations of this war goddess, and Raven’s Mark is a loose representation that does keep some major elements of the folklore.

“The Queen of the Ravens was the Celtic goddess of war. A terrifying, wrathful woman who reveled in evil. She was known as the Triad. Woman with three parts. The woman named Morgan. The Raven Shifter. The Goddess of War.”

In this story our main protagonist, Morgan, can’t really remember her past, only that her parents died when she was sixteen. She has now graduated college and her main passion is writing a story that she can’t get out of her head about five ravens. In fact, this story is what gets her accepted into New York University’s Graduate Program for the Arts, where she also has won a grant that gives her a full scholarship plus free housing for the two years.

She is ready to start her new life, and to finally finish the story that is haunting her, but once she reaches the house, or mansion I should say, she realizes that she will be also be sharing it with five super-hot guys who are all masters at different things, obviously:

“The five of us have known one another for eons. We’re not quite brothers, but close enough; soldiers, warriors, even a criminal or two. Assigned as guards between the worlds. For Morgan.”

I think you guys can obviously make the connection between these five hot guys and the five ravens she writes about. The story switches between Morgan and the guys’ point of view, and thus ensures a reverse harem set up, since Morgan just being inside the house has them all hot and bothered. Oh, and for the worst part of the story: Morgan is a virgin and will have to eventually choose one of these men to give that magical gift to. *throws up forever*

Also, there is no sex in this book. There is a lot of making out, and rubbing, and even a blow job, but no sex. This book is basically setting up the ground work for further installments in the series, which I won’t be reading.

I hate writing negative reviews, especially for independently published authors, but this just felt juvenile and really didn’t work for me. I love reading reverse harem books, but this one felt too forced and Morgan felt too stupid for me to enjoy. If this story sounds interesting to you, for sure give it a try, but it just fell really flat for me.