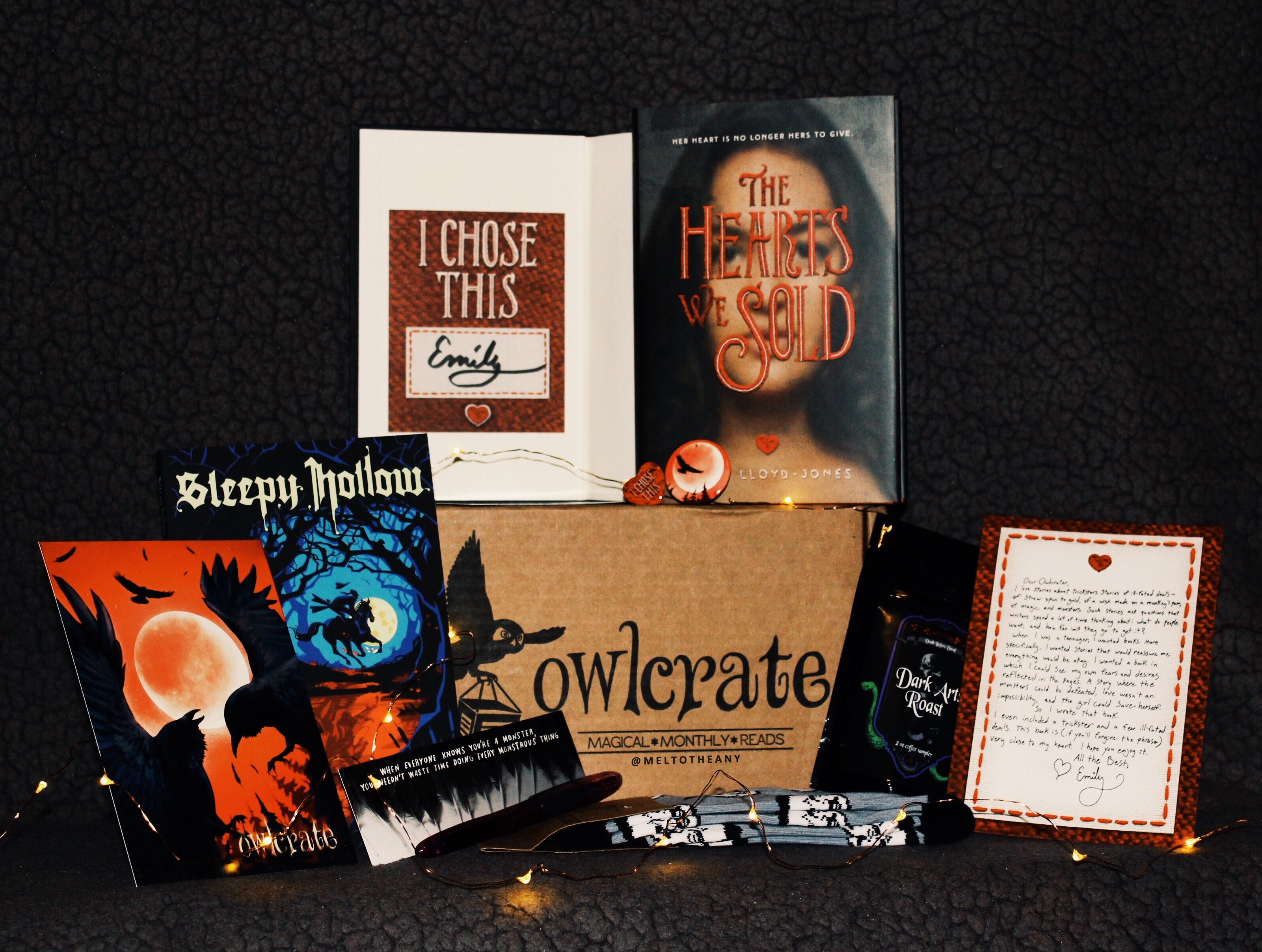 This was in the August 2017 OwlCrate box!

“A demon as knitting outside the hospital.”

This has so much good, I really enjoyed reading it, and I wish I could put this in the hands of a lot of teens that I know need it.

The Hearts We Sold is a story about a girl named Dee that is struggling with abuse and anxiety from her family. She lives in a boarding school that keeps her in a much healthier situation, but the fear never leaves her and it impacts her day to day life constantly.

This story is set in Portland, Oregon, but in this world everyone is aware that demons exist. People in this world make deals with them, and in exchange for some body part, they will grant them something in return. And the demons only show themselves to the people who need them. Dee has been seeing demons for a long time. And you guys can read the title of the book, you can probably guess what hijinks ensue!

Half way through I thought this was going to be a five star read, but then one of the side characters did something pretty shitty, and no one ever talks about it, and it sort of ruined the story for me. Also, this story took a very unexpected turn in general that I’m not sure if I liked. I did, however, really enjoy the conclusion. So, what I’m long windedly trying to say is that the start of this book is amazing, and the end of this book is oh so beautiful, but the middle lost me a bit.

This book talks heavily on parental abuse, and how it can be so much more than just physical. Abuse takes many forms, and even though physical abuse is shown here, too, this book also shows a very realistic depiction of having parents who are alcoholics. There are so many parents out there that truly pick the contents of a bottle over their families, and it’s something that’s not depicted much in YA, but The Hearts We Sold puts it on display.

It also talks about how your parents’ problems are not yours, and how important it is to get away from the situation. I know not everyone can get away, but you can’t be stuck because you must take care of your abusers, even though that’s a very real reality for so many. But go into this book knowing that some of the scenes involving Dee interacting with her family aren’t the easiest. This book made me ugly cry quite a few times.

“This must be why the demon took their hearts. Because it was the only way a human might survive this—by hollowing themselves out.”

Not only does this book handle a very tough topic very well, it also has some great representation. There is a main side character who is a lesbian and was my absolute favorite. I really appreciated how she had a happy coming out story, because that’s something that I was so very blessed enough to have, also, and all I want in this world is to see more happier coming out stories that aren’t always tragedies. Then, a bit later in the story, we get a trans side character who I also fell in love with. And I touched on this before, but this book has such great anxiety representation, too.

This book is also an ode to found families and how important it is to find people that unconditionally love you. Blood is just that, blood, but choosing to spend your days with people who unconditionally love and support you is the true meaning of family, and Dee beautifully learns this.

Overall, this book is important, and even though I didn’t personally love the story as much as I hoped I would, I would still recommend this with every bone in my body.

7 thoughts on “The Hearts We Sold by Emily Lloyd-Jones”