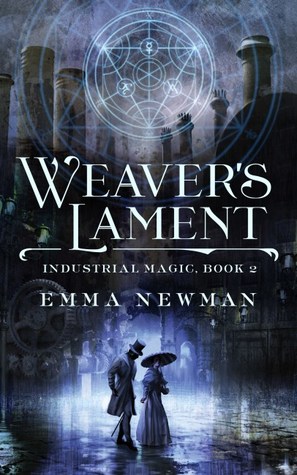 Weaver’s Lament picks right up where Brother’s Ruin left off; our main protagonist, Charlotte, is still reeling from the events that took place, while also trying to uncover secrets that many higherups are trying to keep hidden. Charlotte also lives in Great Britain in the 1850s, where people are still ignorant and believe that a woman’s place is in the house and only in the house. Charlotte is trying to appease her family and fiancé that feel this way, but Charlotte is a very talented illustrator, who sells her work under a man’s pen name. Obviously, this book has a lot of social commentary about women’s rights and equality, but the main plot of each book is truly about Charlotte uncovering a mystery.

And this mystery is brought to Charlotte’s attention by her brother that she helps in Brother’s Ruin. I’ll be honest, I actually really hate her brother and I wish Charlotte wasn’t such a good sister to him. Charlotte’s brother, Ben, has finished his studies with the Royal Society and is now an apprentice that is overlooking the operation of a textile mill. Yet, someone or something is sabotaging the machines and the mill, so he asks Charlotte to go undercover to try to see who or what is causing the problem.

The Royal Society is for people with magical powers and it helps them learn to harness their powers in a way that won’t make them turn wild. Turning wild happens to magic users who don’t turn themselves in to the Royal Society for training. Oh, and Charlotte is a super powerful magic user who has yet to turn herself in.

Charlotte, while working with Magus Thomas Hopkins, quickly discovers what is happening behind the scenes of the mill. But more importantly, she discovers the unfair and inhumane treatment of the workers who have nowhere else to go and are stuck in a cycle of oppression working at the mill and eventually dying at the mill with no opportunity for advancement. This book beautifully talks about social constructs and the oppression cycles we put groups of people in, without a chance to better their lives, but while always belittling them for not “breaking the cycle.” Charlotte becomes very aware of her privilege, and I hope in book three we get to see her act on this information.

But this was a quick read that I really did enjoy. Also, the angst is just killing me between Charlotte and Hopkins at this point. I also feel like there are 100 different threads going in 1000 different directions, and I need to know all the secrets of the Royal Society and this world. I cannot wait to pick up the next installment in this series and I’m so thankful I was able to read this one before the end of 2017!