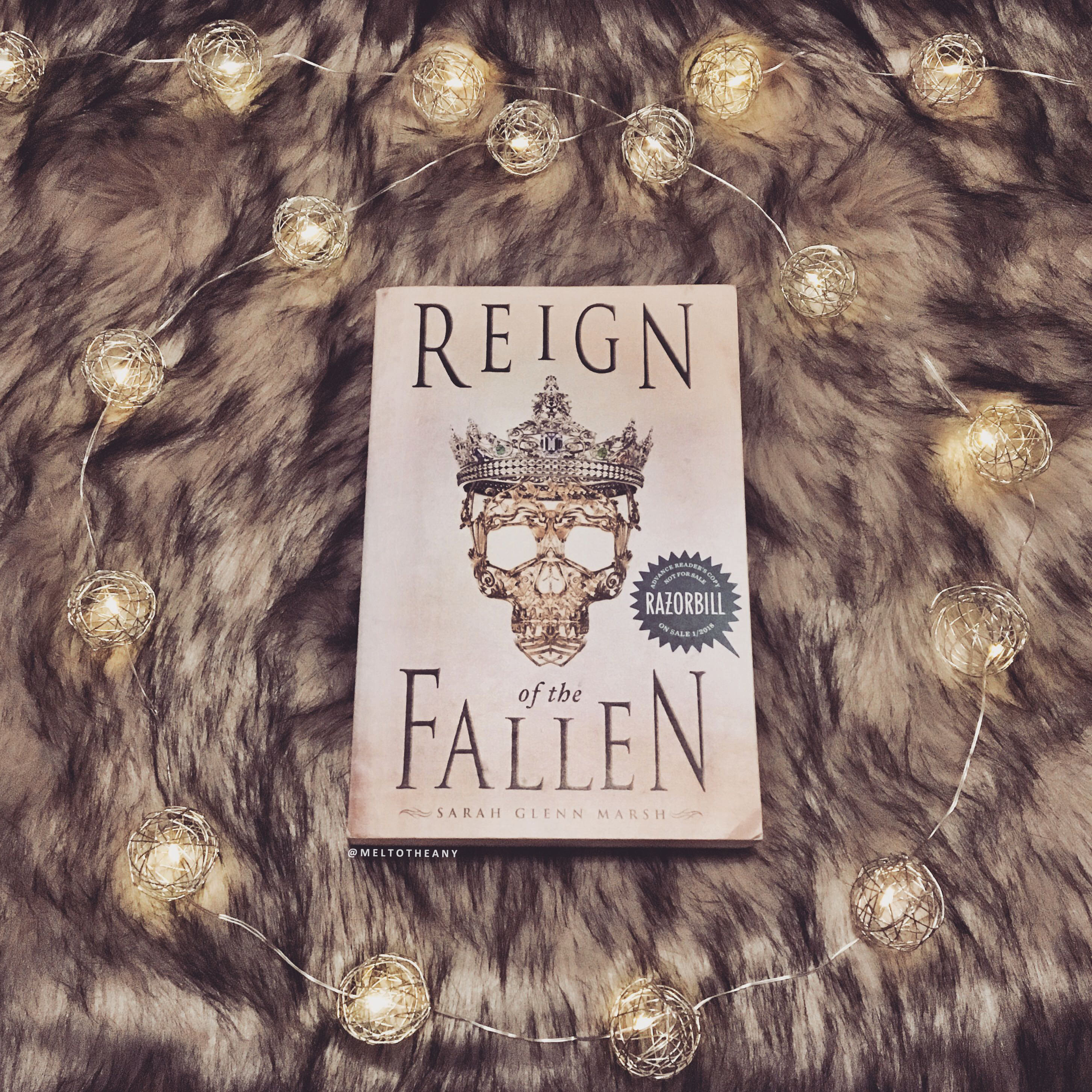 ARC received via #arcsfortrade on Twitter!
(Thank you so much, the spider queen, Elise! ❤)

I could probably get away with just saying “bisexual necromancer main character” for this review and it would hopefully entice you all enough to preorder this, but this truly was a really enjoyable story that I am very happy I was able to read before release.

“Today, for the second time in my life, I killed King Wylding. Killing’s the easy part of the job, though. He never even bleeds when a sword runs through him. It’s what comes after that gets messy.”

Reign of the Fallen opens up with our main character, Odessa, AKA: Sparrow, because she seamlessly flies between the realms of the living and dead, killing and resurrecting the king of Karthia, so he will be able to rule for even longer than he already has. The people love him though, and he trusts Odessa because she truly is one of the best, yet youngest, necromancers this world has to offer.

In this world, people are able to train to become different types of mages depending on their eye color. And we get to see Odessa and her seven friends doing different things because of their different eye colors.

➽Odessa –has blue eyes, so she was able to learn how to enter the Deadlands, even though it does come with an extra price. Odessa is also openly bisexual and I was living for it.
➽Evander – also has blue eyes and is a necromancer. Evander is also Odessa’s lover.
➽Meredy – has green eyes, so she is a beast master with an adorable bear companion named Lysander! Meredy is also queer and is also Evander’s sister.
➽Valoria – has brown eyes and is an inventor, but also the princess of Karthia!
➽Jax – has greener blue eyes, and he seems to be good at tracking, and is best friends with Odessa.
➽Simeon – has lighter blue eyes, so he is also a necromancer who enters the Deadlands with Jax (because you have to have a partner to enter and be safe!) and is a gay man! Odessa also considers him her brother.
➽Danial – has hazel eyes, therefore he has the ability to use his magic for healing! He is also a gay male that is dating Simeon, and their relationship was so cute. I love them both.
➽Kasmira – has dark grey eyes and is a weather mage! She is also a pirate, and is black, and is easily my favorite character besides Meredy! Like, give me an entire book about this soon to be pirate queen, please!

I loved this cast of characters, and I honestly want a book about each of them. But what would a book about necromancers be, if things didn’t start to go wrong? And even though there has been peace between the living people of Kathia and the dead that walk among them for many, many years, we start to figure out that maybe not everyone feels that way.

In this world, even though the dead walk among the living, they are forced to hide every part of their body under clothes. If anyone even catches a glimpse at what is underneath a dead person’s clothes, the dead person will become a shade. Shades are monsters, who can’t control themselves or their actions, and will kill anything that gets in their path. Also, once someone becomes a shade, they can no longer be raised again.

But twists and turns ensue, and Odessa gets forced into the mystery, because she’s one of the best necromancer around. Yet, my biggest criticism of this book is that 1.) there isn’t enough necromancy for my undead-raising-heart, and 2.) I feel like the villain was a little too obvious for my personal liking. I didn’t feel like there was much of a mystery, but I still loved the story so very much, because:

This is one of the most sex positive YA stories I’ve ever read in my entire life. Odessa has sex with more than just one person, and she doesn’t apologize or feel shame for the act itself, ever. We need so many more stories like this and it warmed my heart so very much to read.

This book also heavily talks about substance abuse and addiction. And I have no words for people who think that those elements don’t belong in YA, because that is a reality for so many kids. I know this is a fantasy novel, but it very much highlights the impact that addiction brings, not only to the person consuming the drugs, but to all the people that care about the individual, as well. This discussion is important, and needed, and it meant so very much for me to read.

This book also puts trauma, grief, and loss at the forefront of this story. Seeing Odessa’s pain is very hard to read, but that’s because it is very realistically done. I shed so many tears while reading this book, because the loss and sadness feel so very tangible. This book for sure doesn’t shy away from hard topics, but they are all so needed topics, too.

There is also a very big highlight on found family in Reign of the Fallen, and if you guys have been following my reviews for any length of time, you’ll know that that is something very near and dear to my heart. This book is truly a love letter to found families everywhere and how blood truly will never mean anything, but finding people who unconditionally love you means everything.

And, maybe my favorite part, this book stars a bisexual on page character. This isn’t a coming out story, no one is mean to Odessa for being bisexual, or causes her grief over it; Odessa is just beautifully bisexual and I don’t even have words for how much I love knowing that young adults, who are trying to discover their sexuality, are going to get a YA fantasy novel where it is normalized, accepted, and celebrated.

This world is magical and unique, these characters are diverse and wonderful, the topics and themes are important and needed, and I recommend this book with all that I am. Odessa is a character that I could very much connect with in my late twenties and this book meant a lot to me for very many reasons. I truly loved this book and I hope so many people pick it up and also feel connected with Odessa’s journey. I also cannot wait to see whatever else Sarah Glenn Marsh comes up with, because she’s also one of the sweetest and kindest people I follow on social media. I hope you all pick up Reign of the Fallen this Tuesday!