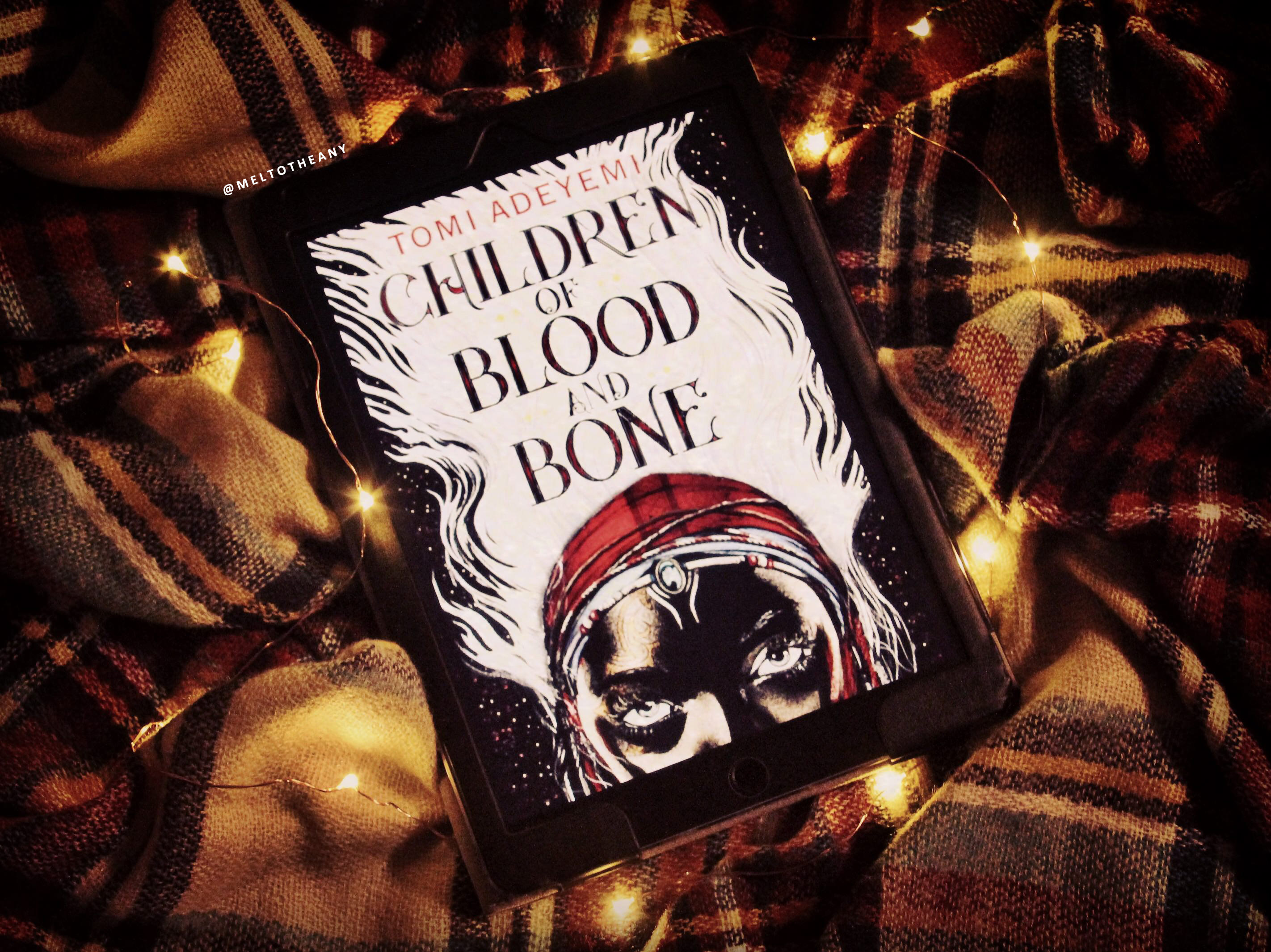 “You crushed us to build your monarchy on the backs of our blood and bone. Your mistake wasn’t keeping us alive. It was thinking we’d never fight back!”

Children of Blood and Bone is worth every ounce of hype and praise it has received thus far, and I only anticipate it to receive more and more, especially since you’re all about to read a gush review for it. The world is amazing, the characters are so real feeling, the writing is perfect, the action is abundant, the romances are beautiful, the topics are important. This was such a fantastic read, and even though it is only late January, I have no doubts that Children of Blood and Bone will make my best of 2018 list, and I wouldn’t be surprised if it even takes the number one spot come December 31st. I’m also honored to say that this is the very first book I’ve given five stars to in 2018.

In this world of Orïsha, magic used to thrive and be celebrated. Our main protagonist, Zélie, remembers this time and what a powerful Divîner her mother was. But she also remembers the way her mother’s body looked, when it was left on display the day that magic died.

Now, the king of Orïsha wants to make sure magic is kept dead, while also keeping all the Divîners that live in Orïsha oppressed. The king ensures that the Divîners are reminded they are lesser, in hopes that they will forget how powerful they once were, along with everyone else. And this has worked, for the last eleven years, that is until a powerful artifact is found and if it is combined with a couple other powerful artifacts it can bring magic back to Orïsha once and for all.

When a Maji is born with white hair, it is a sign that they are touched by the Gods, so they are called Divîners. And back before magic disappeared, when a Divîner turned thirteen, they would develop what kind of power they had from whatever God had touched them. The powers range from healing, to taming animals, to wielding light, to controlling time, to making fire, to calling water, to controlling people’s minds and dreams, to even more things! They were very powerful, and the ordinary people didn’t like them being that powerful, so they had to shut them down and keep them down.

“No matter how much I crave peace, the gods have other plans.”

This story truly focuses on two sets of siblings. One set is Zélie and her brother Tzain, who are currently living in Eloirin, which is surrounded by water, with their father. Yet, the people in Eloirin are forced to pay a Divîner tax, and the prince keeps raising them higher and higher. And if you can’t pay it, then you are forced to perform hard labor (or other worse things) until your debt is paid off. But that’s the thing, you’ll just accumulate more and more debt, and you will never be free again. You will die a slave. And Zélie ‘s family is unsure how they are going to afford to pay the tax for her, so they are forced to go to the city of Lagose to trade. Then, Zélie and Tzain’s story mixes with the other sibling’s story by pure fate of the Gods.

Amari is the daughter of the king that has done everything to destroy magic. Yet, this princess is nothing like her tyrant of a father. And once her father does something completely unthinkable and totally heartless, Amari flees her royal life once and for all.

Inan is the king in waiting and Amari’s older brother. He is probably the most interesting character in this book, because he constantly is struggling between what he wants to be and what has always been forced upon him. And he is tasked to bring Amari back to their king of a father, by whatever means necessary. Then, these four young adults, from very different upbringings, come together to change the fate of Orïsha forever.

“They built this world for you, built it to love you. They never cursed at you in the streets, never broke down the doors of your home. They didn’t drag your mother by her neck and hang her for the whole world to see.”

This story is truly unforgettable, and I loved it more than any words I can string together to form a review. The world building is expertly done, and perfectly interwoven through the story. The magic system is so unique and was an absolute joy to learn and read about. Zélie is everything I want in a main protagonist, and her castmates are nothing short of amazing, too. This book was everything I’ve ever wanted from the fantasy genre.

The writing in this is so very lyrical. I was completely blown away by the magnificent prose. This story is just told so beautifully, I think it would be hard not to fall in love with it. And I want to emphasize that romance is never at the forefront of this story, but some of the one liners that Tomi Adeyemi gave me where truly some of the most romantic lines I’ve ever read. I can’t believe this is her debut novel. Please, just give her all the awards now, because her writing is truly on another level.

“You have your duty and your heart. To choose one means the other must suffer.”

And the messages and parallels to our world, from systemic racism, to prison systems, to so much more, are so very important. I know this is a YA high fantasy novel, but I hope people can’t miss the similarities to the very society we are living in today.

And every single character in this book is beautifully black. Yet, the author does such a wonderful job touching on how people perceive darker skinned individuals to lighter skinned individuals in this world. In this world, the royals want to look as light as possible. Even going as far as to make sure their skin is always powdered, and it is shunned to spend too much time outside where you could become darker. Yet, this young girl, Zélie, with the darkest skin, living in poverty and dealing with the brutal murder of her mother, could be the most powerful person in Orïsha, yet she is viewed as nothing more than a racial slur. This book is powerful, eye opening, and I hope you all take more out of it besides it being an amazing, five starred story.

“I won’t let your ignorance silence my pain.”

This book was a masterpiece. Again, I know with my whole soul that this book will make my best of 2018 list without question. I loved this book with the sum of my being and I know it is going to make so many other’s lists, too. Tomi Adeyemi will forever and always be an auto-buy author for me, because this is maybe the strongest debut novel I have ever read in my entire life. Perfection.

“The truth cuts like the sharpest knife I’ve ever known. No matter what I do, I will always be afraid.”

💖 Preorder your copy of Children of Blood and Bone and submit your receipt as proof of purchase by 11:59 PM ET on Monday, March 05, 2018, and you’ll receive a limited edition poster – Fierce Reads! (US and Canada only, excluding Quebec, I’m sorry)