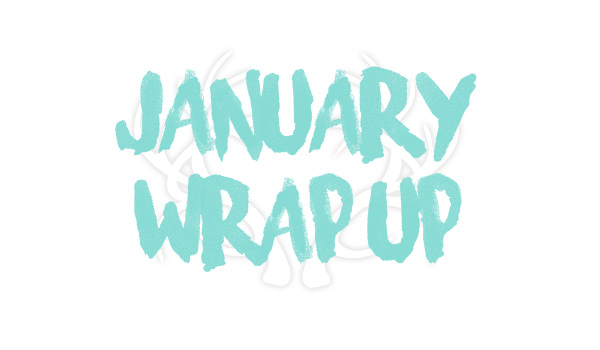 Hey, guys! I can’t believe it is already the end of January! I hope you all had an amazing reading month. Mine was kind of lack luster, but out of the eleven things I managed to pick up, I did five star two of them! And I just know that one is going to stick with me throughout the year! ❤ 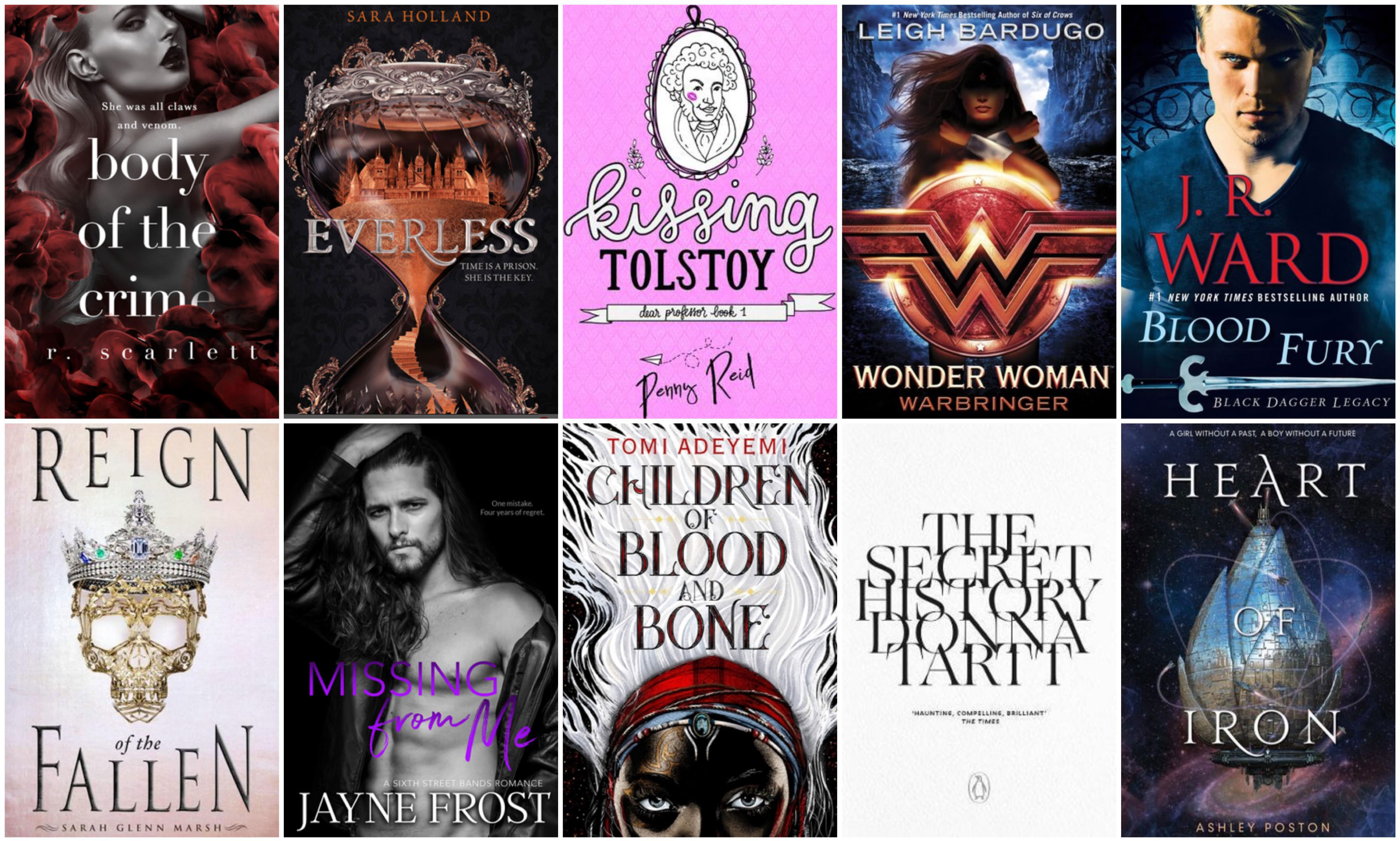 ➽ Body of The Crime (Blackest Gold #2) by R. Scarlett – ★★★
This is book two of a series all about demons and the wicked world they try to hide from humans. This book stars a young 19-year-old girl, Molly, who is the victim of a 300-year-old contract that was set up by her ancestors. The contract promises Molly, who was born with ancient daemon (unlike demon) powers beyond her control, to marry a demon of a very prestigious demon house. She is also promised to give him an heir eventually, but he has to have sex with her, AKA mate her, so no other demon can pursue Molly, since she is a very rare commodity that would make any demon mate even more powerful. Overall, I really enjoyed this and it was such a fast and addicting read. And I feel so happy that I was able to start my 2018 off with this engrossing and captivating PNR!

➽ Everless (Untitled #1) by Sara Holland – ★★
Buddy read with Destiny, Em, & Elise! ❤ Maybe I would have really enjoyed this if I hadn’t read so much YA Fantasy. Maybe a younger Melanie would have ate this up and asked for seconds. Sadly, I’m just at the point in my life where I feel like I’ve read this all before. And the aspect of this story that is really cool and different is the everyone’s lifespan is their currency. In this world, you can bind your blood to iron to make coins. And they come in amounts of hours to years. Now this is absolutely amazing, and I love the concept completely, but my friend, Em, pointed out how similar it is to the movie In Time starring Justin Timberlake and I just couldn’t unsee the similarities. Also, I really didn’t enjoy the romance.

➽ Moonlight Sins (de Vincent #1) by Jennifer L. Armentrout – DNF @ 8%
So, the basic premise of the 8% that I read is that brothers find their father dead from what looks to be a suicide, but upon further inspection, appears that that might not be the case. The main character, Lucian, lives in a mansion that is so big that there are rooms he hasn’t been in for years, but he does have a girl captured in one of these rooms, but her appearance is still a mystery to me, because I’m stopping at 8%. Also, Lucian is oh so strong for saying no to a super-hot blonde woman that is naked and throwing herself at him in another room, while he is discovering the death of his father. You all, life is short and precious, and I can’t be spending mine reading books that don’t interest me in the slightest.

➽ Kissing Tolstoy (Dear Professor #1) by Penny Reid – ★★★★
Holy adorable, this was the cutest. This is a fluffy, but sexy, short, little romance, that centers around two people and their love for Russian literature! This was my first Penny Reid novel, but it won’t be my last. This novella blew me away and I cannot wait to see what else she has instore for us with this series. The writing was great, the humor was actually funny, the romance was swoon worthy, and the story was a joy to read.

➽ Wonder Woman: Warbringer (DC Icons #1) by Leigh Bardugo – ★★★
Buddy read with Destiny and the rest of Life & Lit (DM Destiny for a FB invite)! ❤ I will continue on with the series with Batman by Marie Lu! But, sadly and ultimately, I just don’t think superhero books are for me. I totally enjoyed reading this, but something just kept me from loving it, so I’m going to blame it on that. I still think this is a very worthwhile and important read, and I’m so happy that I finally was able to get around to it!

➽ Blood Fury (Black Dagger Legacy #3) by J.R. Ward – ★★★
I still really enjoyed this installment, but I have to be honest and say that this was my least favorite in this spinoff series thus far! I love Novo, I love Ruhn, I LOVE, LOVE, LOVE Saxton with the sum of my being, but I honestly dislike Peyton. And, like, look at the cover… he’s probably the main character of this book, even though he shares the spotlight with the three others. n the Black Dagger Brotherhood we follow a bunch of powerful vampires, that are in an elite group that protects humans, vampires, angels, and a bunch of other paranormal entities, and they all live in this big mansion, and they all are one big family that’s just saving the world. Well, in this series, Black Dagger Legacy, we get to see a younger generation of recruits, trying to join the elite protection force.

➽ Reign of the Fallen (Reign of the Fallen #1) by Sarah Glenn Marsh – ★★★★
Buddy read with Destiny! ❤ Reign of the Fallen opens up with our main character, Odessa, AKA: Sparrow, because she seamlessly flies between the realms of the living and dead, killing and resurrecting the king of Karthia, so he will be able to rule for even longer than he already has. I could probably get away with just saying “bisexual necromancer main character” for this review and it would hopefully entice you all enough to pick this up, but this truly was a really enjoyable story that I am very happy I was able to read before release.

➽ Missing From Me (Sixth Street Bands #3) by Jayne Frost – ★★★
Missing From Me is a second chance romance, set in Texas, that centers around the drummer of an up and coming rock band. Even though this is the third book in a series, I was able to pick this up and understand everything going on, with very minimal spoilers. Overall, I would totally recommend this, especially if you are into rockstar romances, which I seem to be a sucker for. Seriously, I have honestly dated five drummers in my life, so… this obviously worked for me. In my opinion, this book had the perfect mixture of heartwarming scenes, romantic scenes and steamy, sexy scenes.

➽ Children of Blood and Bone (Legacy of Orïsha #1) by Tomi Adeyemi – ★★★★★
Buddy read with Adri! 🦊 Children of Blood and Bone is worth every ounce of hype and praise it has received thus far, and I only anticipate it to receive more and more, especially since you’re all about to read a gush review for it. The world is amazing, the characters are so real feeling, the writing is perfect, the action is abundant, the romances are beautiful, the topics are important. This was such a fantastic read, and even though it is only late January, I have no doubts that Children of Blood and Bone will make my best of 2018 list, and I wouldn’t be surprised if it even takes the number one spot come December 31st. I’m also honored to say that this is the very first book I’ve given five stars to in 2018.

➽ The Secret History by Donna Tartt – ★★★★★
This was one of the most unique reading experiences of my life. I honest to God just do not have the words to put in this wrap up how this book made me feel. I will say that it very much feels like a spell is being cast upon you while reading. Like, I am almost positive that Donna Tartt cannot be a human being, because she is such an exclusive enigma. But this is a story about six kids, going to an elite college, and murder ensues.

➽ Heart of Iron by Ashley Poston – ★★★
I wanted to love this one so badly! I mean, Anastasia in space? Take all my money, please! But I didn’t love this one, but it was still a fun read! It also had a really swoon-worthy m/m romance between two major side characters that I really enjoyed. Overall, I do think this was a bit of a let down, but with that cliffhanger ending? There for sure will be another book in this world, so hopefully the next one is better!

And that’s everything I read (or tried to) during the month of January! I have such a full TBR for February, that you will all see tomorrow, but I hope to read even more next month! I hope you all had an amazing first month of 2018, and I hope you had some amazing reads. I know that Children of Blood and Bone is going to be one that sticks with me throughout the entire year! Happy reading, guys! 💖