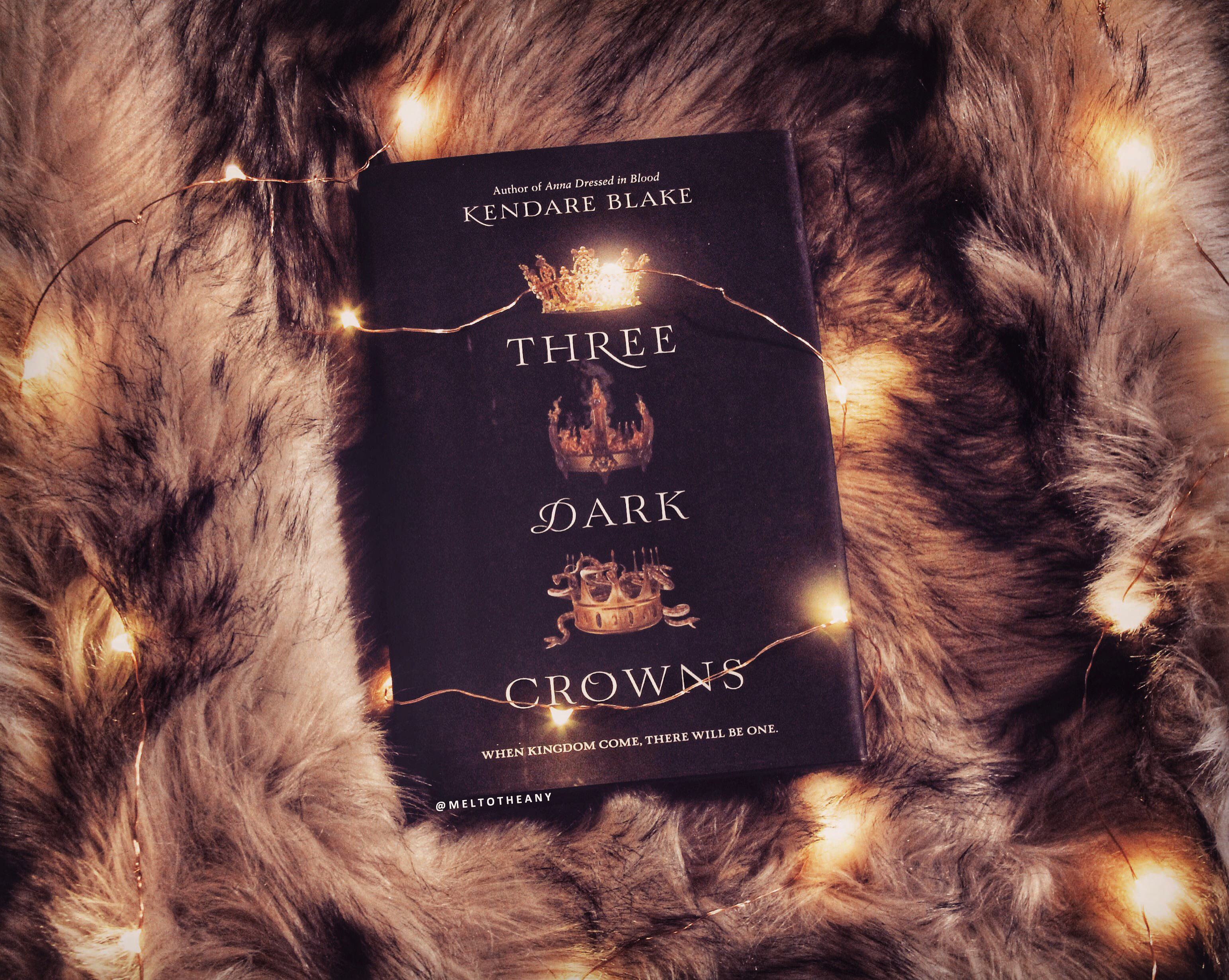 “No one really wishes to be a queen.”

Oh my, I loved this. This book seems to be very polarizing on my feed, and from people I love, trust, and have similar reading tastes as, so I was a little apprehensive going in. I read that first chapter with my mouth open the entire time. Instantly drawn in, immersed, and in love.

Most of you probably know the synopsis of this book, but it will still bring me immense joy to tell those few who might not know. Basically, this story is set in a world with an amazing matriarchy, where a queen will always give birth to multiple girls. For the most part, it will be triplets, each with different powers, who will be sent away to live among people who have also developed their powers. Yet, once these sisters turn sixteen, a battle will begin which only ends when only one of the girls are alive and the other two sisters dead. This lone triplet will be the new queen of Fennbirn.

This world is gloriously feminist, and I loved each point of view from the different islands. And the writing? Beautiful, lyrical, genius. And I fell so very in love with each sister, easily, and happily. These characters are honestly a tier above almost every YA character I’ve ever read. And again, this was such an amazing journey and I hope more people give this book a shot, despite the mixed reviews.

And the twists and turns? I was at the edge of my seat reading this! And I was going to say one of the only downsides while reading was because a friend sort of intentionally spoiled a twist for me, but then I was completely blindsided by another immediately after. The only reason I chose to give this four stars, instead of five, was because the actual plot itself was a little slow for my liking. This is a very character driven story, and I loved that so much, but some major plot points just felt like they took too long to get going. Even though, once they did? Lord, help me. Perfection.

“In her mind, every last Queen lies at the bottom of the sea, drowned by the Goddess the moment she was done with them.”

So, something I also really want to talk about is how this (in my mind and my opinion) is an own voices book. I watch a lot of Booktube, I read a lot of blogs, I spend too much time on book twitter, but I have never heard that Kendare Blake is Korean, ever. I noticed how the triplets’ descriptions were somewhat vague besides the dark black hair, so I went and did some searching, and I was absolutely shocked to find out that this book is written by a woman of color. I immediately went to snapchat, and all of my friends, too, did not know this. So, I just wanted to make this a point in my review, because me and so many of my friends want to support marginalized voices, and if I would have known this sooner, I wouldn’t have waited to pick this book up. On top of the fact that I loved it, and it was amazing, it warms my damn heart to picture three kickass Asian girls, trying to overcome to pressures that this world has put on them, while trying to decide their own destinies. Seriously, this meant so much to me. Okay, I’m going to do a quick breakdown of the three sisters! I found these amazing pictures from Epic Reads on my wonderful friend May’s review and I couldn’t resist adding them to mine, because they are so dang adorable and perfect!

➽Katharine 💚☠ – Gravesdrake Manor – Poisoner Queen
The poisoner queen always wins, so Katharine has a tremendous amount of pressure on her. But her body is weak and frail, from being forced to ingest so many poisons, and from the abuse she receives for not achieving her full potential. She is lonely, and scared, and somehow completely made her way into my heart. Katharine is my favorite of the three sisters. 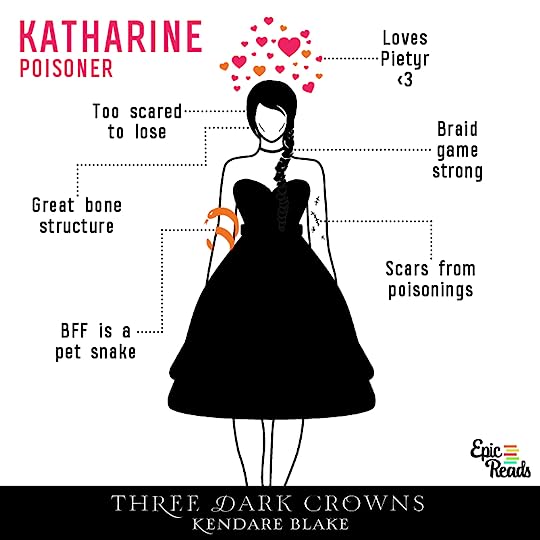 ➽Mirabella 💙🔥 – Rolanth – Elementalist Queen
The strongest of the sisters. The world already tells tales of her power. She is almost guaranteed to be the next queen, but she is constantly struggling with the idea of killing her sisters. She was raised among the people of the temple on her small, but very religious, island. She, too, has felt really lonely growing up. 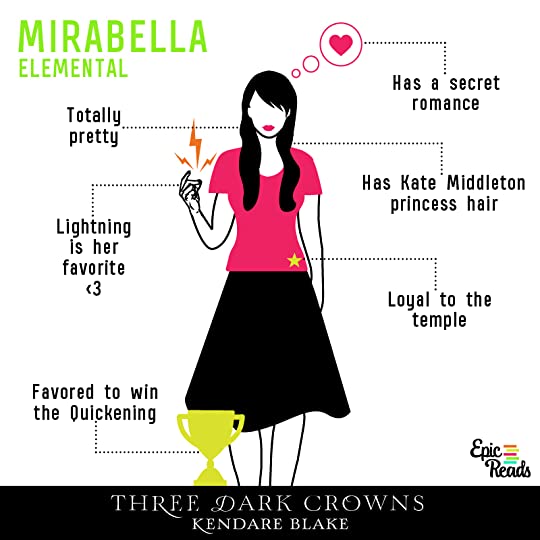 ➽Arsinoe ❤🐻 – Wolf Spring – Naturalist Queen
This sister for sure had the happiest upbringing, with friends and found family that actually loves her unconditionally. Sadly, she hasn’t developed any of her naturalist powers, but her best friend, Jules, is one of the strongest to have ever lived. She is desperate to develop any magical affinity, and starts tampering with magic that she probably shouldn’t, because this magic always comes with a price. 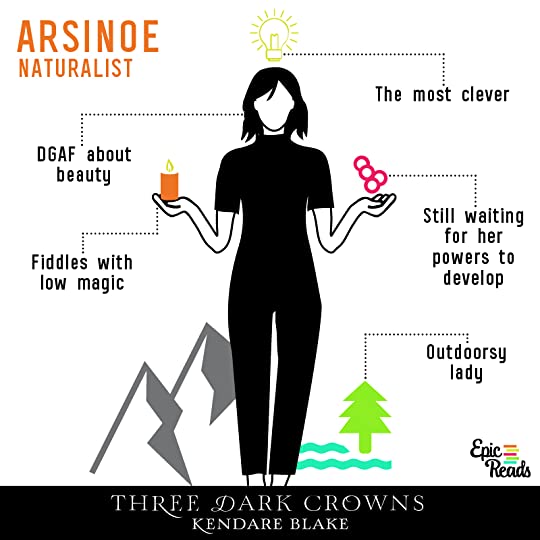 And even though Katharine is my favorite, I loved all three so much. And all three sisters are so beautifully morally grey, especially by the end of this story. Morally grey characters will forever by my favorites, and Kendare Blake gave me three strong, powerful, and smart ones to cry over and to root for.

Oh, and also, I told myself I wouldn’t devote a paragraph to this, but here we are with unpopular opinions: I don’t hate Joseph, not in the slightest. Like, did he do something he maybe shouldn’t have? Yes. Is this a realistic depiction of being a sixteen-year-old whose hormones are working double time? Yes. And I think he proved numerous times that he isn’t a bad guy. He does the “right” thing over and over, even if he is suppressing his own happiness. Also, I’m always here for all the sex positive depictions. More unpopular opinion: I totally ship him with the unpopular one to ship him with. Muahahahaha!

“I should think that is what anyone would wish- to be loved for themselves and not their position.”

Overall, I truly loved this. I can see it being one of my all time favorite series. And I cannot wait to start One Dark Throne immediately. Also, say a prayer for me that my Target still has the signed edition that I saw a few weeks ago.