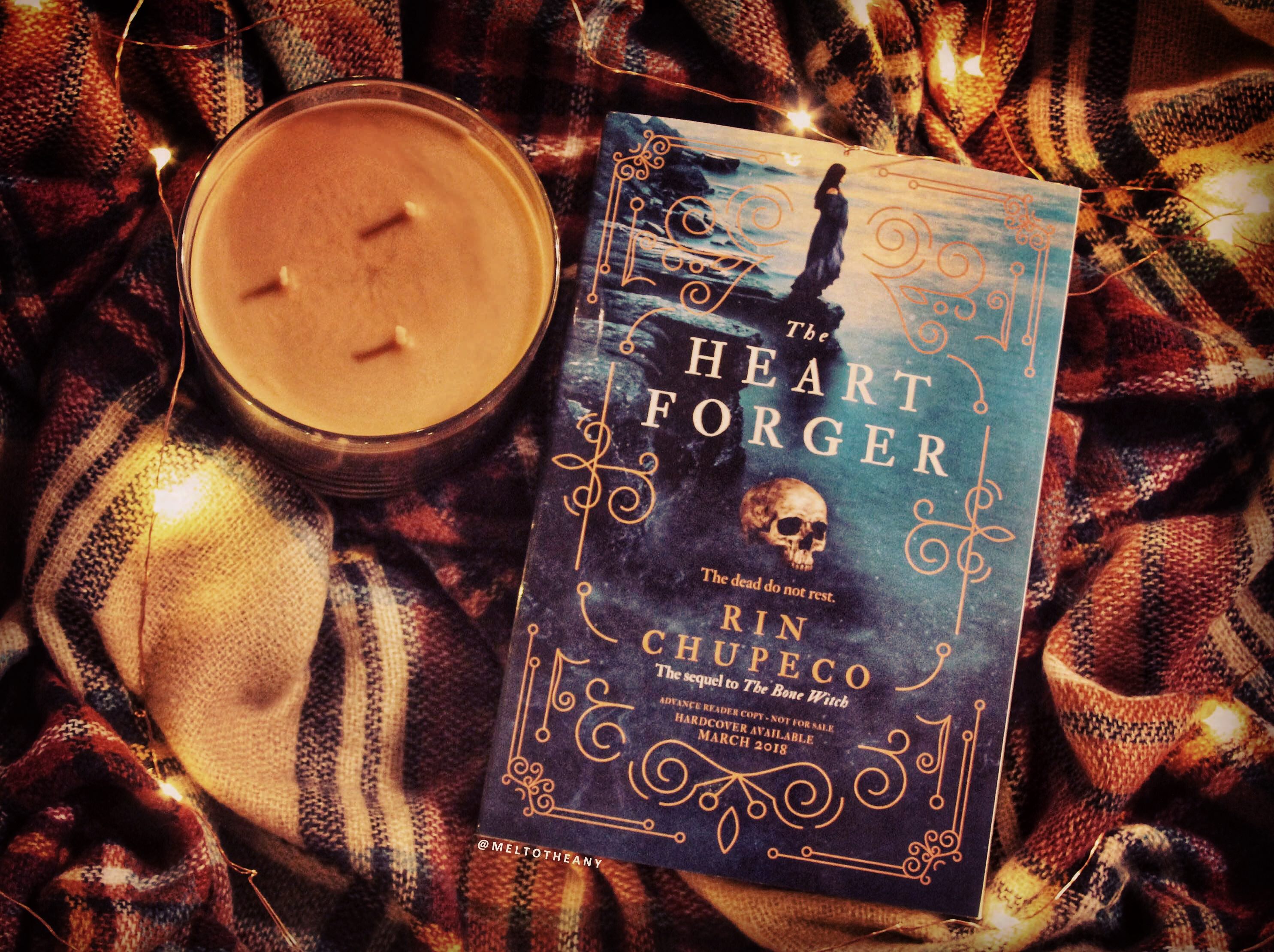 “I suppose the trouble began again when I tried raising a king from the dead.”

This series means so much to me. I loved The Bone Witch so much, but The Heart Forger is now in a tier by itself. This is the type of book that makes you wish there were more than fives stars, because it just feels like it deserves something more. It was glorious perfection, and Tea is my favorite necromancer of all time. And Rin Chupeco is a master storyteller.

“She wore the corpses for show. They trailed behind her, grotesque fabrics of writhing flesh and bone, spreading across the plain for miles around us.”

This is an ownvoices, Asian inspired, fantasy story that stars a young necromancer, looking for her place in a world that has constantly told her she is going to become evil. This story is told in two parts, but not equally. The lesser part, before every new chapter, are the events taking place through a bard’s eyes, who is chronicling the events currently, where Tea is proving to become the evil villain the world wanted her to be. But the main story is told in the past, and we get to slowly find out what happened to put Tea on this path that the bard is seeing.

“What’s one more lie to believe when I am just a scheming, murderous bone witch, constantly seeking stars beyond her reach?”

One of the more unique and cool aspects of this world, is that all the people wear heartglasses around their necks. Your heartglass will change colors depending on what you’re feeling but will overall stay mostly the same color. Yet, silver means you draw runes, which means you can fight, whether it be as an asha if you’re a girl or as a solider if you’re a boy. Silver heartglasses are so very important and are so very sought after.

Other ashas control elements: fire, earth, water, wind. But Tea is a bone witch, AKA: a dark asha, and she deals in death. Bone witches are not very respected in this world, even though their powers hold the most important job in this world, because they are the only ones who can defeat Daeva, AKA: different demons who dwell in this world, who are resurrected every so often. Also, bone witches are incredibly rare, but they seem to not live long.

“…black heartsglass is the ultimate fate of bone witches like us, Tea. Dark asha do not live long lives. But when they do, it is only a matter of time before their hearts become corrupted.”

This book places a big emphasis on gender roles and the way the world also forces us to conform to them. A side character, is constantly battling against them, and all the main characters are so supportive and uplifting. Likh is also the sweetest little cinnamon roll and I want to personally protect them at all costs.

Queerness always plays a pretty big part in this story. First off, we have two queer ladies that are big side character that had me smiling from ear to ear. Next, this book is called The Heart Forger, and that heart forger has been ostracized by his ruling father, stripped of his crown, because of the fact he likes men. You all, I don’t have words, only tears. But such wonderful discussions are held within the pages of these books. And I appreciate it so much.

The only “negative” thing I’ll say is that the three boys in this book all have names that start with the letter K, and it is a little hard (at least for me) to keep straight! So, let me do a little break down for you guys, in case you also have this problem:
➽ Khalad – The newest heart forger, but still an apprentice.
➽ Kance – Prince, who will eventually be king. Khalad’s younger brother and Kalen’s cousin.
➽ Kalen – Amazing warrior who is promised to protect Kance at all costs.

But this was honestly my only problem with this book. Besides this little qualm, this book is perfection in my eyes. And this story is so inspiring, I can’t even put the feelings into words. And Tea is one of the most selfless protagonists I’ve ever had the pleasure of reading. Every choice she makes is so important. And it’s so beautiful to see her choosing actions that go against what everyone thinks she will become. This series has so many feministic themes, and I’m living for each and every one of them.

“Tea, you should prove them wrong. Show them asha are more than concubines for princes.”

You guys know I’m weak for a good sibling relationship, especially between a brother and sister, and Tea and her brother (that she resurrected to ultimately find out she was a bone witch) are goals! Fox is such a good character. And him and Tea’s banter is so believable and perfection. And Tea catching glimpses of her brother and a princess brought me so much joy and too many giggles. And now that we know what Tea is still trying to accomplish in present time, because they both share a lifeline. My heart, I can’t. The love between siblings can be so powerful.

But speaking of love. You all, I wasn’t prepared for the damn romance in this book. The Bone Witch gave us little breadcrumbs, but The Heart Forger busted through the door and asked me to hold their beer. Page 319 did things to me, and I’m still reeling. And, again, to know the outcome from the present time through the bard’s eyes, it equally guts me, yet warms my heart. It is so good.

Overall, this has every single element that I look for and love in the fantasy I read. This has such a diverse cast, the magic is so unique, the world building is fantastical, the animal companion of Tea’s is everything, Tea herself is the feminist main character I want in every book, the writing is lyrical, I highlighted at least one quote in each chapter, and I mean, this is ultimately a story about demolishing some patriarchies. This story has it all, and I feel so blessed to have been able to read it. This is, without a doubt, going on my “best of 2018” list.

Buddy read with Lilly at Lair of Books ! ❤ 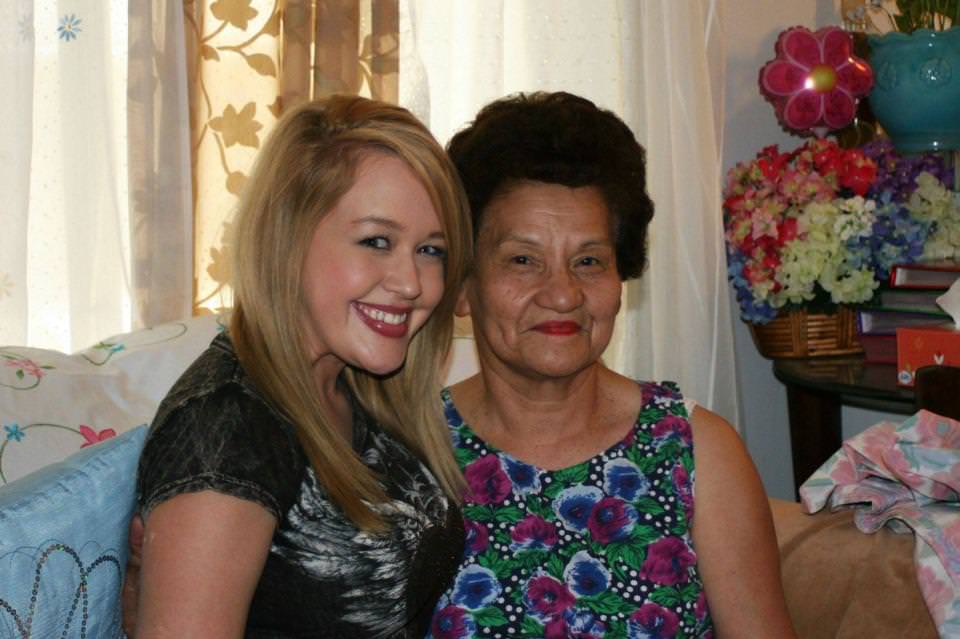 Cute picture of me and my Grandmother who immigrated here from the Philippines in the 60s, who also loves The Bone Witch! I normally don’t disclose personal things about my family in reviews, but I got permission from her, and I really wanted to emphasize how much this series means to me. My Lola was so happy when I told her one of my favorite books of 2017 (and now of 2018) was written by a Filipino author! And never let anyone tell you that representation doesn’t matter. In your twenties, in your seventies, at any age, it matters. I promise.

8 thoughts on “The Heart Forger (The Bone Witch, #2) by Rin Chupeco”