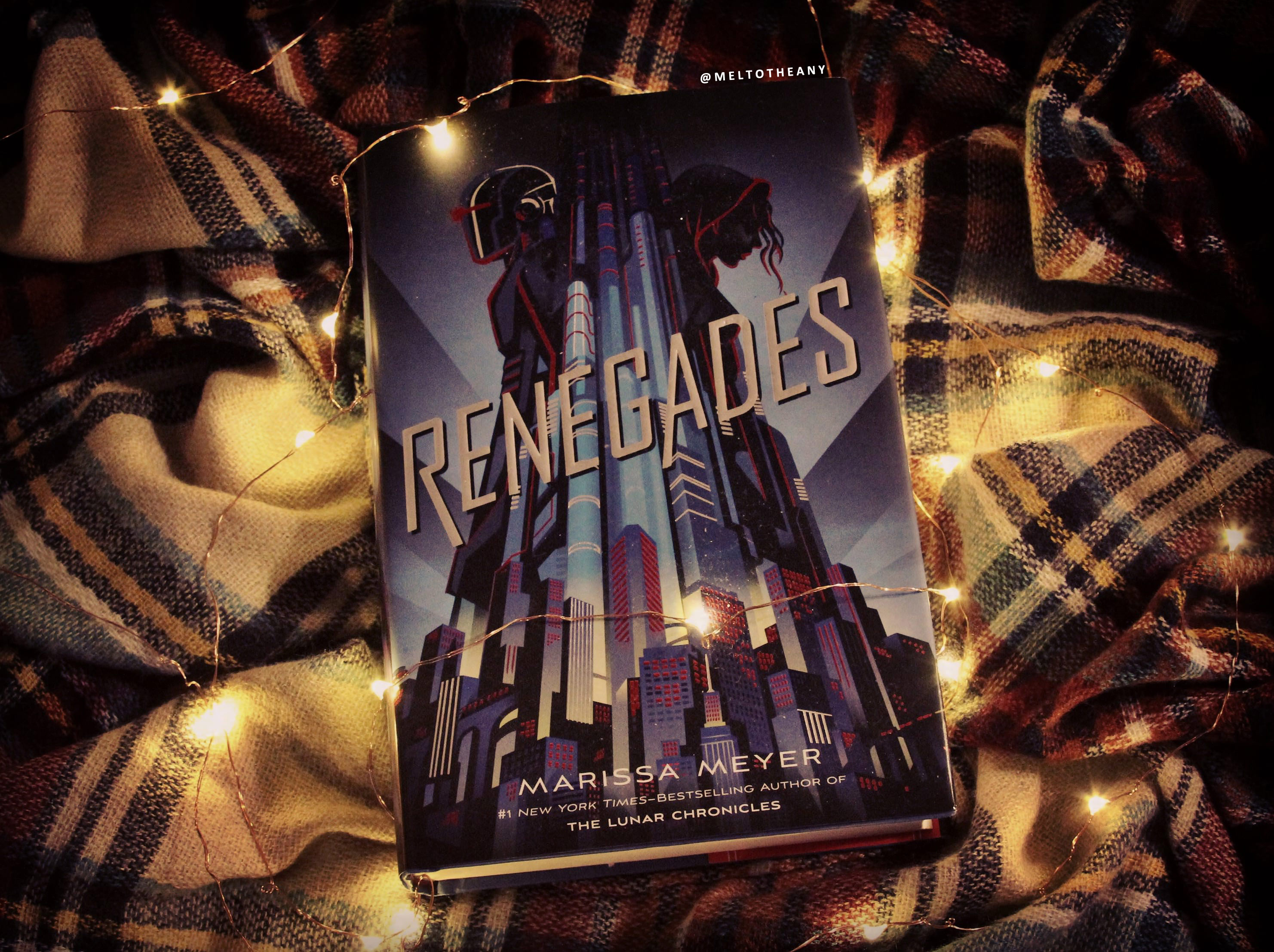 Me and Marissa Meyer have an all over the place relationship. I wasn’t the biggest fan of The Lunar Chronicles, but I love Scarlet and Wolf! But my favorite thing she’s ever created was Heartless, which I five starred and it made it onto my best of list the year it came out. So, I didn’t know what to expect going into Renegades. I wasn’t even going to pick it up originally, but I did solely because I saw a Goodreads review being disgusting about there being two gay dads that raised one of the main protagonists. TL;DR – I loved the gay dads, but I only ended up liking Renegades.

Renegades is set in a world where people rely on superheroes. The superheroes come with a vast array of powers and abilities, but with superheroes, there are always supervillains, too! Yet, the supervillains are more of rebels with superpowers, and they call themselves the Anarchists!

Our main protagonist, Nova, was raised to believe in the Renegades and to trust in the hope that they provide. But that all changed the night she was orphaned, and no one came to save her or her family. Since then she has had only one mission: to get vengeance for her family.

“One cannot be brave who has no fear.”

Also, I couldn’t write this review without mentioning that Nova (AKA: Nightmare and Insomnia) is Italian-Filipino, and this made my little Filipino heart so very full of happiness. Also, Nova’s super power is sleep manipulation, which was totally unique and super badass, in my opinion. Also, I’m forever living for morally grey characters that are constantly questioning the motives all around them, so Nova was a damn treat to read about.

The other main protagonist is Adrian (AKA: the Sentinal and Sketch), who happens to have the two kickass, gay, famous, superhero dads! His power is pretty OP; as long as he believes something is plausible, he can draw it and give it the desired effect. Like, it’s kind of complicated, but he can pretty much draw things and make them a reality.

And obviously Nova and Adrian’s lives intertwine and a lot of events ensue. And, if you’ve ever read a book by Marissa Meyer before, you can probably guess that a romance happens as well. Now, forbidden romance is kind of my favorite, and I was here for it, but I will say that it was a little cliché at times.

But this is a story about secrets, filled with characters that are playing both sides for the Renegades and for the Anarchists. This story is filled with twists and turns, and you’ll never really know who to root for, which is pretty amazing.

Yet, this is also a story about questioning what is good and bad. And how things that present themselves as good aren’t always the way they seem. I think it’s important for kids and teens to be reading about questioning the world around them right now, and I really liked the discussion that could be had here from these themes that were presented.

“If people wanted to stand up for themselves or protect their loved ones or do what they believe in their hearts is the right thing to do, then they would do it. If they wanted to be heroic, they would find ways to be heroic, even without supernatural powers.”

Now, let me also say that I read this via audiobook, and I am the worst audiobook reader ever. I just have a really hard time focusing, and I’ll try to listen while I play League of Legends, and then I’ll end up not retaining anything, and I’ll have to go relisten. This book took me a month to read, which is unheard of for me. I strongly believe that if I read this book physically that I would have enjoyed it even more. And I completely plan to do so with the next book!

Overall, if you like superhero books then you will probably really enjoy this one. Sometimes I did feel like maybe a few elements were pulled too strongly from X-Men (*cough ROGUE cough*), but Marissa Meyer’s writing is always easy to read and fun to follow. The story had a bit of racial diversity, sexual diversity, and a disabled side-character that I really appreciated. Also, please give me an entire book of just Max, thanks. But I think most people that have enjoyed previous things by this author will also really enjoy this one! I’m excited to see what happens next, especially with that ending.

“There are many dangerous people in this world. But there are also many good people. Brave people. No matter how bad things get, we have to remember that.”