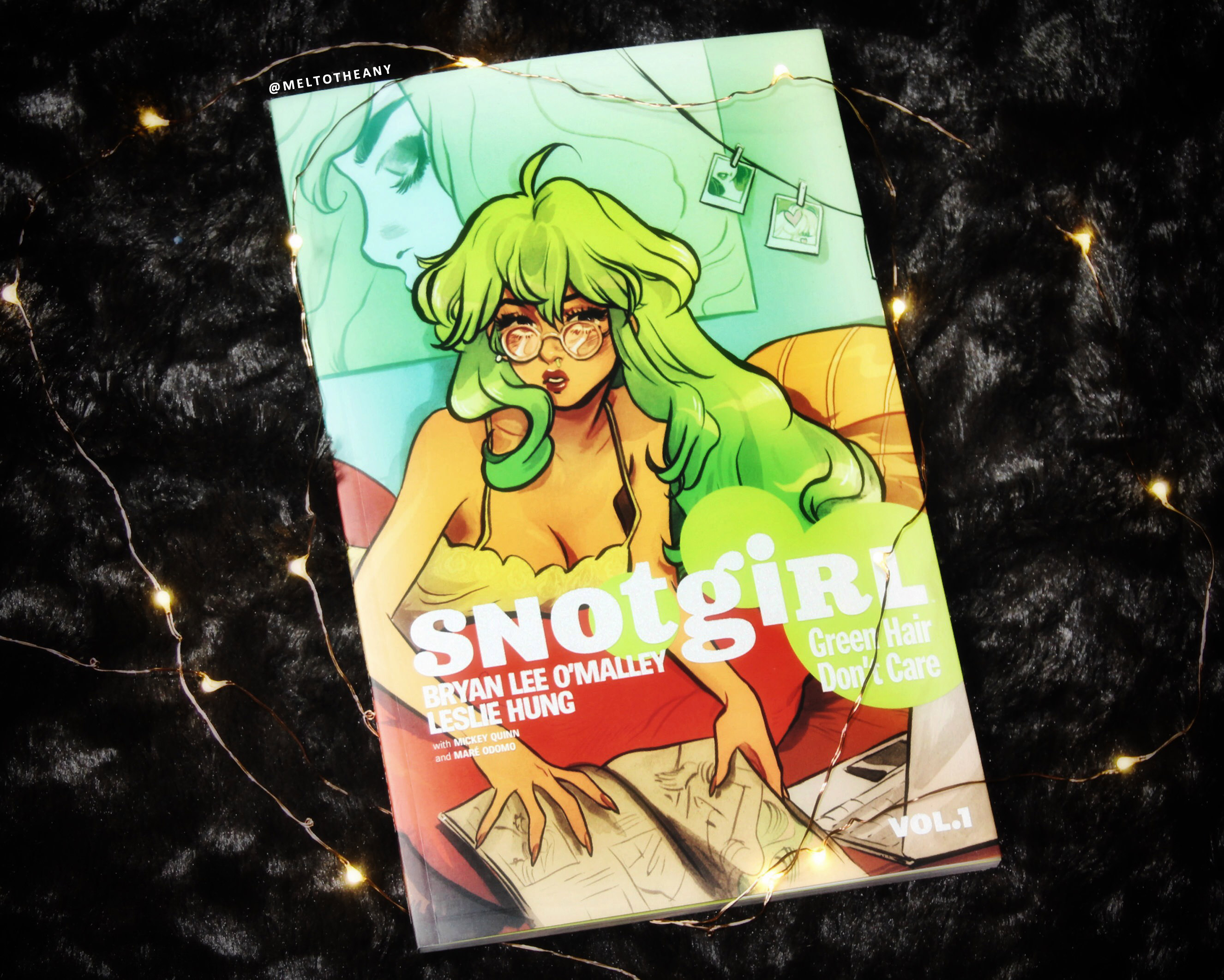 This is a five issue bind up that stars an almost twenty-six-year-old blogger, who feels like her online life is way more exciting than her offline life. I mean, #relatable. Online she is a big fashion blogger, who just recently celebrated her eight-year blog anniversary! She has a very large social media presence, but it takes a lot of work, and a lot of pretending to be something she’s not.

Offline, Lottie suffers from very bad allergies. She meets a girl who soon dubs her “snotgirl” but it’s been the first offline friend that Lottie has had in a long while. She recently switched allergy medicine, recently was broken up with, recently found out she may have a stalker, and is just looking for one night of normalcy by going out to a bar with her new friend. And it’s all fun and games until her new friend may be dead in the bathroom. *dun dun dun*

First, the good. Okay, I’ve probably never read a graphic novel that’s been as close to my color pallet aesthetics. Seriously, the coloring of this volume is one of the most pleasant things I’ve ever seen. Completely beautiful in every way. Also, I really like the art. The panels are wonderfully laid out, and smartly laid out! And I also really enjoyed how texting was done in this and was a big part of the conversations going on. Also, I freaking LOVED seeing her blog layouts. Seriously, this is a well crafted story, and it was a joy to look at.

But sadly, aesthetics were the only things I really enjoyed about this one. Lottie was just a terrible protagonist to read about. At first, I thought I was going to have empathy for her, but then she just treated everyone like shit and only cared about the way people looked. When she is first judging people and giving them little nick names like “cutegirl” or “normgirl” with her online friends, I thought it might just be part of her online persona, but I quickly realized that she’s just not the greatest person.

A few of the side characters’ representation (you know, who are not white and skinny) also made me a little uncomfortable. There are three people of color in this graphic novel. The first is a black woman that is Lottie’s intern, who she doesn’t pay. She also acts a little resentful when the intern expresses the need to find another job after school. Lottie has over two-million followers, she can afford to pay her, and it made me sick to read how she wasn’t paying her, honestly. There is another black character, but he’s only shown a couple of times, and works with another detective, who is an Asian-American. The Asian-American character also is portrayed in a negative, stalking, light, and I really disliked it. Lastly, the only bigger girl in this story is the one referred to as “normgirl” and Lottie makes remarks about how much better looking normgirl’s boyfriend is, therefore he’s better than her. It reads and feels really bad.

Also, I totally thought that Lottie and her new friend, Caroline, AKA: hotgirl, were going on a date to the bar. And again, I don’t want to throw around the word queer-baiting, but I totally thought that something was going to happen romantically between them. But hopefully if you guys read Volume 2, there will be some kind of LGBTQIAP+ representation, but I won’t be touching another installment of this comic series.

Overall, I thought I was really going to like this one, based on the cover alone. But you’d think I’d learn by now, true? This wasn’t for me in the slightest. I was hoping to read a story about a girl blogger dealing with anxiety and trying to make friendships offline, but instead I got a judgmental, mean girl, who would never hold herself accountable for any actions.

Trigger/Content Warnings: Murder, death, stalking, blood depiction, use of pills, and a lot of insensitive and superficial comments.