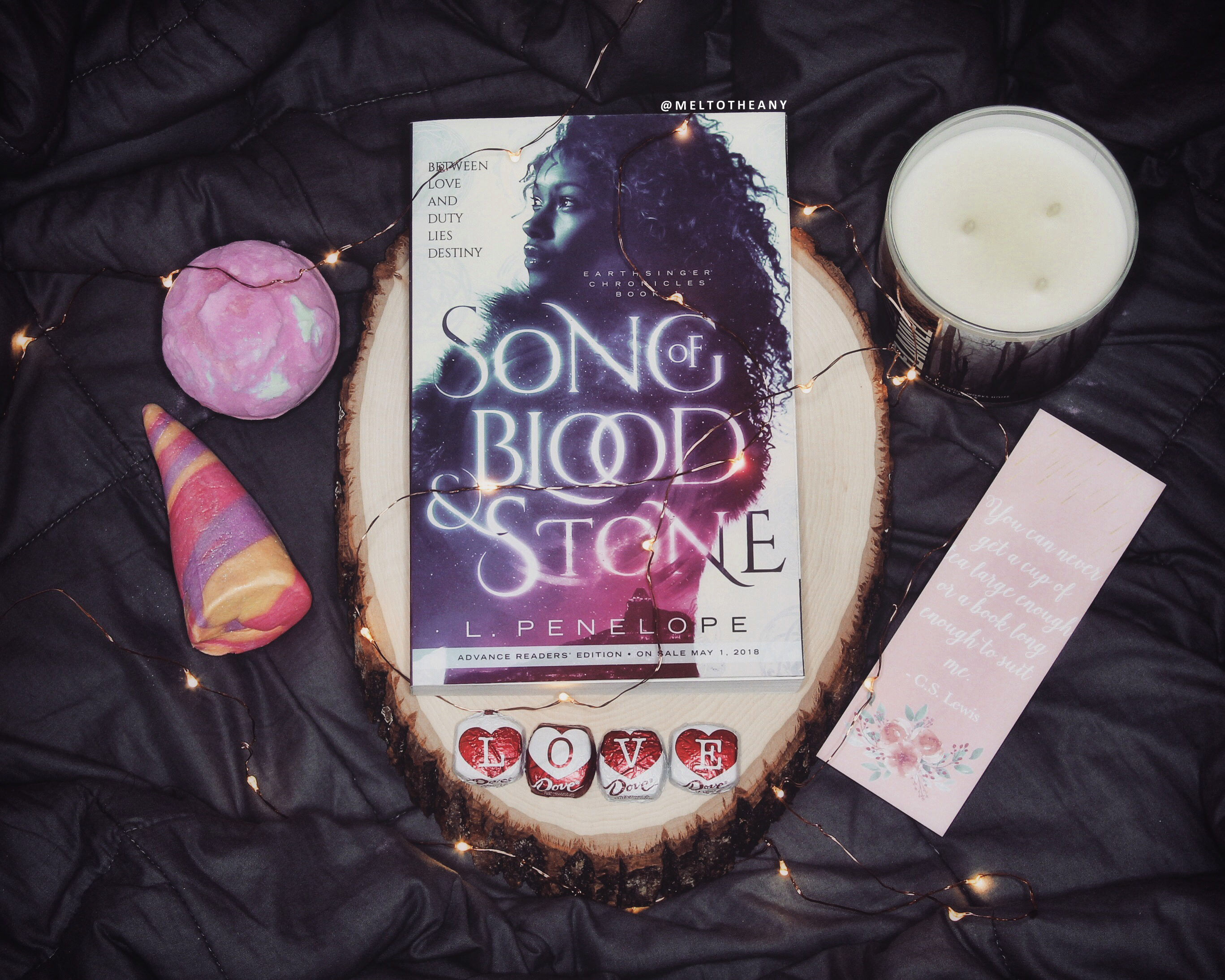 Song of Blood & Stone is the historical fantasy I’ve been looking for. This story is set in an alternate 1920 and has a really unexpected wild west feel to it, but I loved it. The romance was so good, the topics were so important, and the characters completely stole my heart. This book has a lot to love within its pages, and I completely recommend this story to you all.

“Most folks hate easy and love hard. Should be the other way around, I reckon.”

Jasminda is a girl torn between to worlds, while learning more and more every day the definition of loneliness. The book starts out with Jasminda’s grandfather trying to pay her off to erase her mother’s name. Her parents come from warring cultures; Jasminda’s mother was Elsiran, and her father was Lagamiri.

➽ The Lagamiri people are dark skinned, worship a queen who has been asleep for a long while, and can wield magic by the way of song.
➽ The Elsira people are light skinned, magicless, and ruled by a cruel and oppressive ruler who calls himself the True Father. They are magicless because the True Father steals magic from his people, taking more and more and more, but now he wants to pierce the veil and rule both.

These lands are separated by the Mantle, which is a magical border that can only be crossed by people who can Earthsing. And throughout the story, we learn more and more about the Queen Who Sleeps and the tyrant True Father. And it slowly unfolds the story of what happened and what events took place to create the world that Jasminda knows.

Jasminda is an outcast that doesn’t fit into either world after the death of her family members. She lives in Elsira, but because of her darker skin she is constantly reminded that she isn’t one of them, but she knows close to nothing about Lagamiri culture and customs. I loved the discussion of being an interracial woman in this book, and it is a theme that is highlighted throughout the entire book. She lives a life of isolation, feeling like an outcast, until she stumbles upon a wounded soldier who has been spying on the enemy. And Jasminda can’t resist using her Earth song to heal him.

This book switches points of view between Jasminda, and the rebel solider, Jack. And this healer and undercover solider start the most beautiful of friendships that eventually might lead to something more. *whispers slowly* The something more is so damn good. OTP status.

This book also really heavily mirrors the world we live in today with it’s handling of refugees. The parallels to 2018 and how we (Americans) treat refugees is unmissable, and it is something I wish more fantasy authors would incorporate within their writing. It’s powerful, it’s eye opening, and more people need to be aware of their internal prejudices. Also, this book shows how news reports can blatantly lie and make a population of people act off pure hatred.

And besides this starring a biracial protagonist, who is starting an interracial romance, this book also has a lesbian side character who warmed my heart. There are also discussions to be had about abuse, about cultural erasure, and systematic oppression. Again, this is such a powerful story.

One of my favorite aspects of this book was seeing Jack learn, understand, and use his privilege and power to do what is right. He always treats Jasminda with the respect she deserves but seeing him understand that all the Lagamiri people deserve the same respect was so important to me. And again, it shows what people in power, who truly want equal rights for all, can do if they truly want to. And Jack listening and learning because of Jasminda was perfection.

“Honor is doing the hard thing and letting history determine your legacy.”

And it was a treat to read about Jasminda. She is such a strong main protagonist, with so much agency. She is smart, empathetic, brave, and everything I look for in a character who will eventually steal my heart.

The writing in this is lyrical poetry. I love L. Penelope’s prose so very much. They continued to blow me away with each powerful sentence after powerful sentence. This book honestly has some of the most beautiful writing I’ve read in a long while.

I only truly have one complaint and that is a scene that happens very early in the book where it is implied that it is more evil or wrong for a man rape another man than it is to rape a woman. It’s only in one sentence, but it still felt really bad to read, and I really wish it wouldn’t have been included.

Trigger/Content Warnings: attempted rape, violence, death, and war themes. Also, I personally believe that this is a new adult novel, and there is sexual content within these pages.

Overall, I really enjoyed this book. The messages are powerful, the discussions are needed, the story is beautiful, and I want more. I loved the world, the magic system, and the characters so much. This was such an enthralling and atmospheric read, and it was a joy to read. I can’t wait to see what L. Penelope does next!

Buddy read with Julie at Pages and Pens & Jules at JA Ironside! ❤