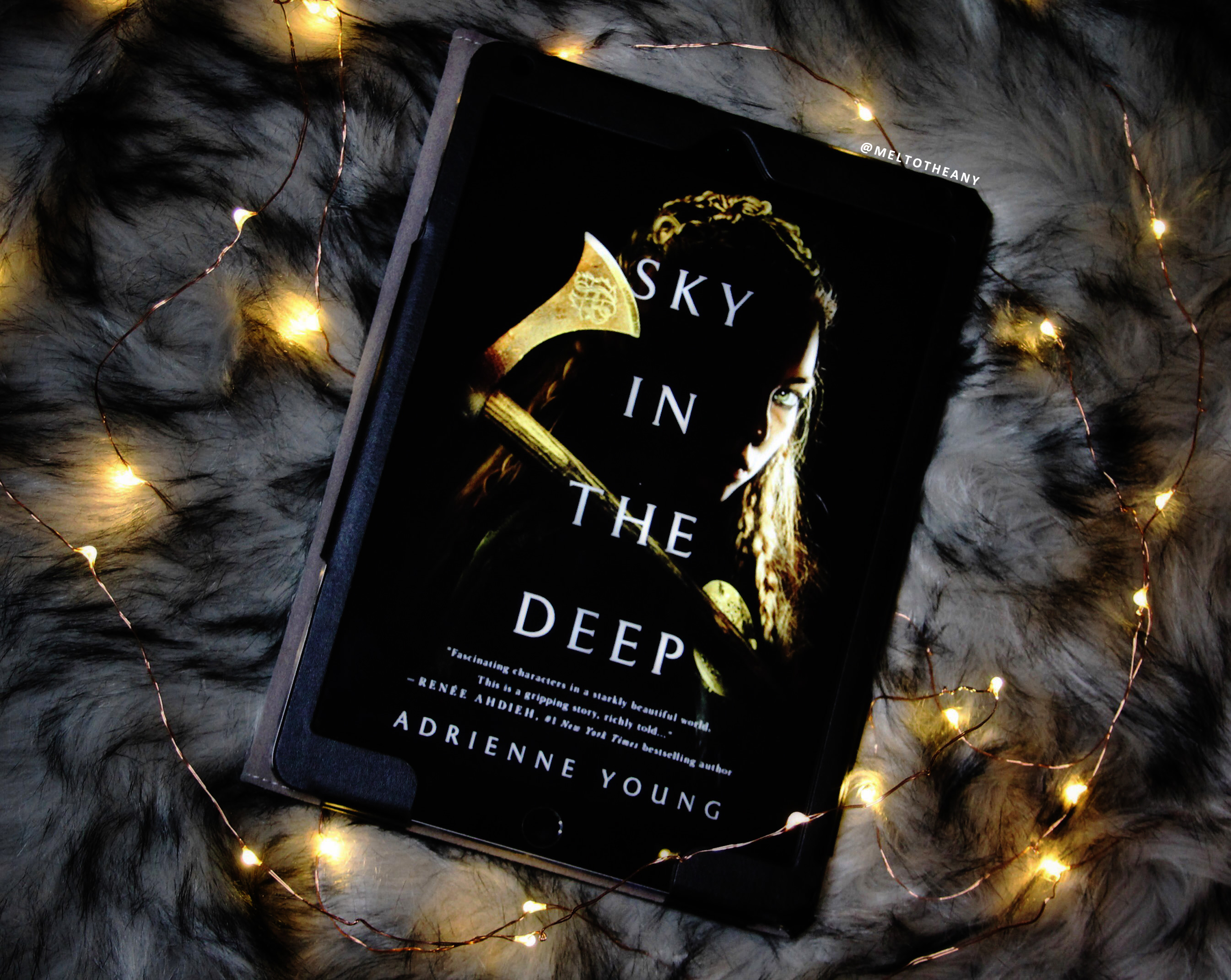 “…the last time I saw my brother was five years ago. Lying dead in the snow.”

Sky in the Deep is a debut, standalone, young adult fantasy novel that stars two different Viking clans. But this is a story about betrayal, then survival, then a choice. You all, I really enjoyed this one. I thought it was unique, well written, and has some amazing characters.

Our main protagonist, Eelyn, has lived the last five years mourning her brother’s death. Every five years, the two rival Viking clans battle for no reason other than blind hatred. And five years ago, Eelyn had to watch him fall off a cliff and was forced to leave him dying below. But this book starts out five years later, with a brand new battle, yet Eelyn sees her brother, Iri, before her very eyes.

Eelyn doesn’t even know how to process what she is seeing, especially being on the opposite side of the battlefield with her presumed dead brother, who was once her fighting partner. And her hesitation costs her, because she ends up captured by a Riki, who spares her life for some unknown reason.

“I’d abandoned my clansmen on the battlefield to chase after the brother who didn’t even want me.”

Then we get to follow Eelyn becoming a slave for the people who she has vowed to always kill. But slowly, she starts to realize that maybe the Aska and Riki have more in common than anyone would ever think, including a common enemy, the Herja, that will eliminate them all the same way they killed Eelyn’s mother.

I will say that I thought this read a little older on the young adult scale. I mean, yeah, the main character is totally seventeen-years-old, but her brother is five years older and the story does star him, too, even if we don’t get his point of view. A lot of dark things happen in this book, and the author doesn’t shy away from the violence. And rape threats are used a lot during this story. Like, a lot a lot, so just know that going in. And content/trigger warnings for loss of a loved one, violence, murder, gore, sexual assault(s), physical abuse, slavery, talk of suicide, and war themes.

And even though this is a brutal book, the romance is so damn sweet. I mean, it’s a slow burn without question, but enemies to lovers will forever be my favorite. But seeing it happen to a nice guy, too? It was really sweet and I really enjoyed it. I might even go as far to say that the romance in this book was my favorite element of the entire story.

“I remembered the way he looked, lying with eyes staring into the sky that day I’d left him in the trench in Aurvanger. The broken boy bleeding in the snow beside my brother. I wondered if the gods had a plan then.”

I also love the sibling relationship between Eelyn and Iri. In general, I’m always a sucker for books about siblings who unconditionally love each other, but this story had such a unique twist and dynamic, I absolutely loved unfolding the mystery behind what happened five years ago.

My heart was also truly stolen by Halvard and his relationship with Eelyn in this book. Like, best character and the most amazing little cinnamon roll ever. There is such a strong emphasis on found family in this book, and I was so here for it. Truly, these 350 pages carry a beautiful and important message about how life is about surrounding yourself with people who love and accept you, regardless of what blood runs in your veins.

Overall, I really did enjoy this one. I wish the rape threats weren’t so abundant, but besides that I feel like this is a really solid story that is action packed and truly captivating. I never wanted to put this book down, and each time I picked it up I felt absolutely teleported into this world. Also, I kind of have a soft spot for girls that wield axes. I really enjoyed it, and I cannot wait to see what Adrienne Young does next!

Playlist of songs that inspired this story!

Buddy read with Jules, at JA Ironside, Lilly at Lair of Books, & Amy at A Court of Crowns and Quills! ❤

30 thoughts on “Sky in the Deep by Adrienne Young”