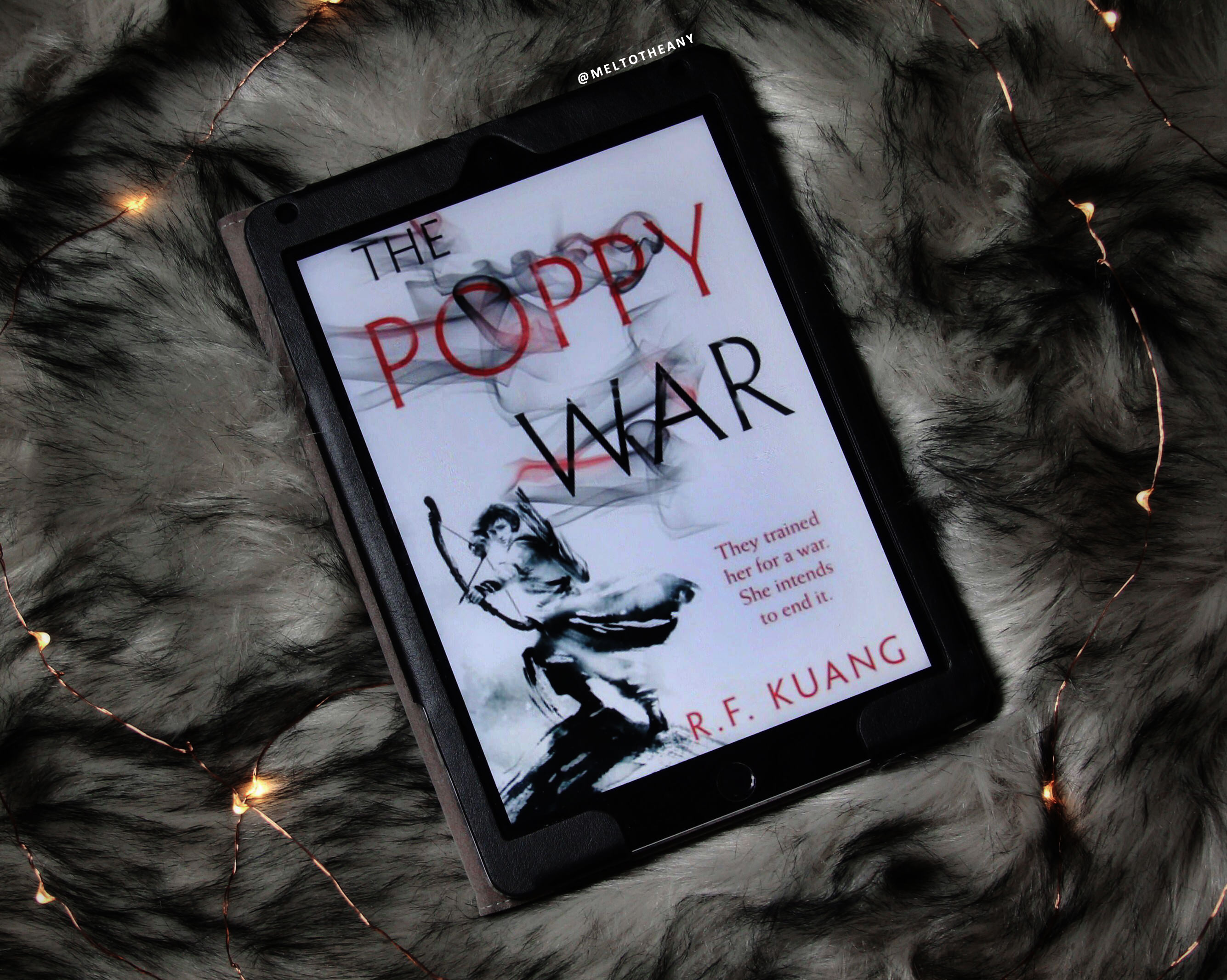 “But I warn you, little warrior. The price of power is pain.”

First and foremost, please go read one of my best friends in this entire world’s review: Petrik’s review is not only amazing, he is also an ownvoices Chinese reviewer. Next, I just want to warn you guys that this is a very dark book that is heavily inspired by Nanking Massacre. Please use caution and know that this book has major trigger and content warnings for war themes, drug use, substance addiction, self-harm, racism, misogyny, genocide, bullying, abandonment, abuse, animal death, animal cruelty, brutal torture, brutal killing, brutal rape (off screen, but still maybe the worst I’ve ever read), mutilation, very graphic depictions of how children and adults died, experimentations on people against their will, colorism, colonization. Again, this is a very dark book that carries some very dark themes. Please use caution.

The Poppy War is a fantastic debut that I feel so very privileged to have received an ARC of. This is the first book in an ownvoices Asian inspired fantasy story, and this first installment is told in three parts; each getting darker and darker. But in part one we meet our main protagonist, Rin, who is a war orphan who is living with a foster family that was forced to adopt her.

Rin has been working at the family’s local business, while also being forced to deal drugs. That is, until one day her family decided that it would be more in their interest for them marry Rin off to a man who is much older than her and who she has never met before. Rin is then forced to do the only thing that will allow her to not have this life forced upon her.

“Well, fuck the heavenly order of things. If getting married to a gross old man was her preordained role on this earth, then Rin was determined to rewrite it.”

In this world, children will study their entire lives for a test called the Keju. And the top fifty students in the country will be allowed to go the empire’s capitol to study at the best military school in the world. There they will be able to become the world’s best generals, tacticians, soldiers, and more. And all the students wish to one day be warriors for the Empire. And Rin dedicates herself to studying so that she can not only escape this marriage, but to also escape her abusive foster parents, and the entire town that has treated her awful just because she was born a war orphan.

And against all odds, Rin gets accepted. But once she gets to the school, she soon realizes that her spot isn’t guaranteed to last. At the end of the year, the different teachers will pick which students they wish to have study under them. And Rin soon starts to see that most of the school is not only very privileged, but also have power just from their last name and who their family is already in the current military.

And the reason part one of this book is hands down my favorite is because I love this school setting so much. And like many other reviewers have already said, it is very reminiscent of The Name of the Wind. From the attending kids that have been born with a silver spoon in their mouths, to unexpected companionship, to horrible teachers, to wonderfully odd teachers. And Rin becomes obsessed with not only impressing these teachers and her peers, but to prove that she is also deserving of her spot.

“You’re a war orphan. You’re a southerner. You weren’t supposed to pass the Keju. The Warlords like to claim that the Keju makes Nikan a meritocracy, but the system is designed to keep the poor and illiterate in their place. You’re offending them with your very presence.”

And while Rin is working to become the best at her school, terrible things are brewing outside the walls of the academy. Terrible, unthinkable things, that are about to impact the whole world. And Rin is forced to quickly learn about another world all together, where gods can make a person a shaman that can wield that power, but at a cost. And Rin has to discover for herself if the price is worth it.

This is an action packed read, with beautiful writing that feels like a treat to read. This is a story filled with twists and turns, and you might think you know where the story is going, to only be completely dumbfounded. I couldn’t flip the pages fast enough.

Also, there is sort of an enemies to friends (maybe lovers eventually) element in this book, and I’m dying to see more in book two. Like, there is going to be more of it? Right? Please. Seriously, what God do I have to let inhabit my body? I need it.

“Because I can,” she said. “Because he thought he could get rid of me. Because I want to break his stupid face.”

And ultimately, this is a story about a girl who has been given nothing but pain in a world that constantly reminds her that she is lesser. And she overcomes every single hurdle and becomes not only what the world said she couldn’t be, but she becomes what she wanted to be. Like, this book is powerful, empowering, and a love letter to all girls that are told they can’t do something daily.

Overall, I really enjoyed this one, even if it got even a little too dark for me at times. I think this is a really amazing set up for what is sure to be an impressive debut fantasy series! I cannot wait to see what R.F. Kuang does next, because I really think The Poppy War is a bright shining star in 2018 releases.