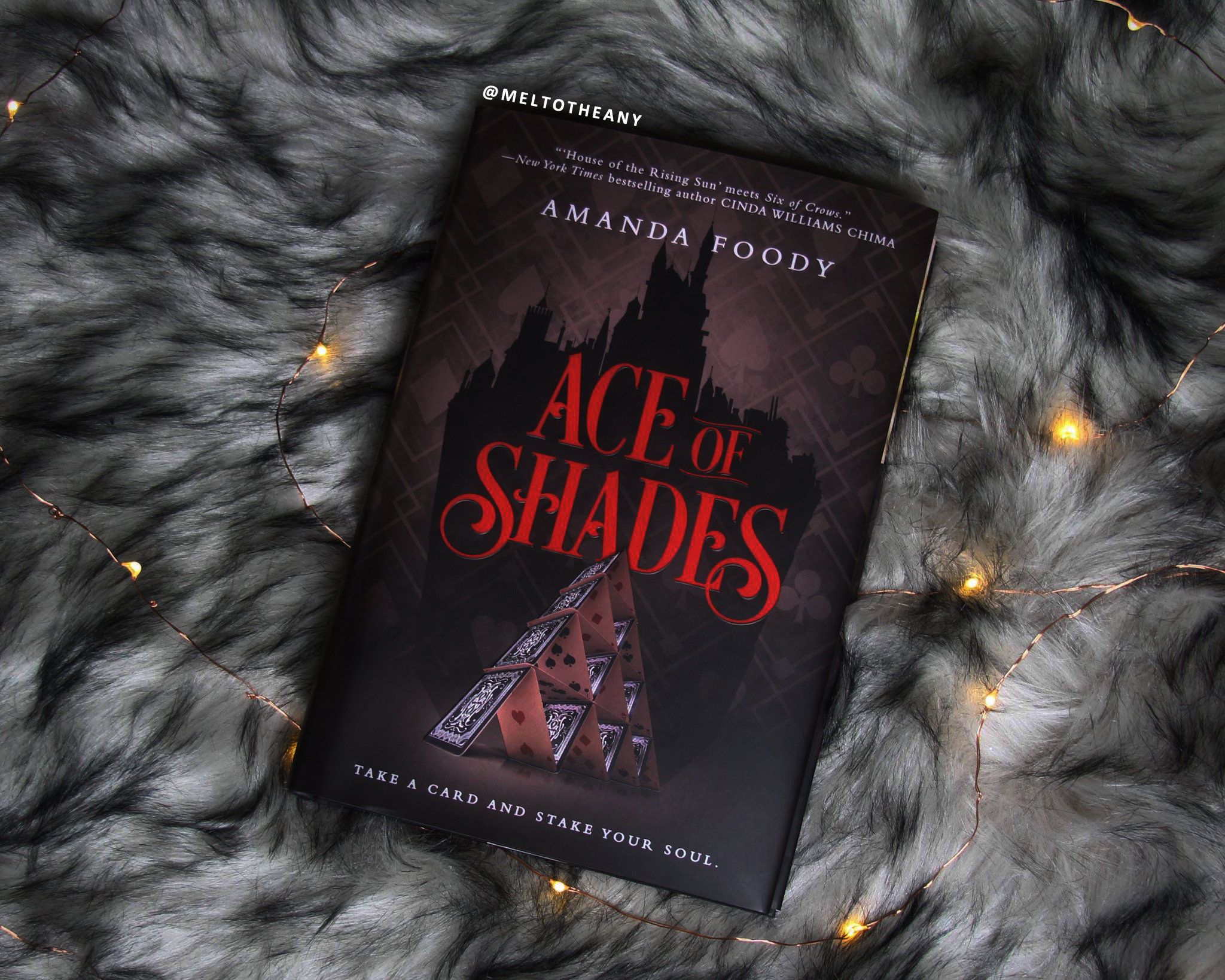 “The City of Sin was a game, but not everyone was a player.”

Ace of Shades was for sure not what I was expecting. Some said it was like one of my favorite series of all time, Six of Crows, but I didn’t see that. A lot of people said it had a setting like the city I live in currently, Vegas, and I suppose I see it, but it is a stretch and for sure a very big fantastical interpretation and based on every stereotype you think of when you think of Vegas (which are mostly all untrue). I mean, maybe like Old Vegas, Fremont Street style, but for sure not my Las Vegas in 2018. Yet, if I honestly had to compare this story and its feel to anything, I’d compare it to Caraval, but I even feel like that’s a weak comparison. But regardless of what people compare this book too, I thought it was its own unique concept, and it was overall an enjoyable read.

This story starts out with a girl and her guidebook and a city filled with sin and mystery. We get to follow her during the span of ten days, while also seeing if this new town will ultimately make or break her. And Enne Salta was forced to come to New Reynes, because her adoptive mother went missing, but not before she was able to send a letter to Enne letting her know where to go and who to trust.

And the only name on the letter is Levi Glaisyer, a boy who has only been hardened by this unforgiving city. Also, Levi is black and bi and warmed my heart throughout the entire story. And, Enne’s missing mother, Lourdes, is gender-fluid, which was such an amazing addition! But Enne and Levi quickly realize that Lourdes was living a very dangerous secret life, and they are quickly trying to unravel the secrets. And even though, Levi is not the easiest person to like at first, we soon find out he is a leader of one of the three gangs in New Reynes!

➽ The Scarhands – the largest gang, ran by Reymond Kitamura, and specializes in counterfeits, forgeries, and weapon trading.
➽ The Doves – all the gang members dye their hair white to match their lord, Ivory, and they specialize in being assassins.
➽ The Irons – the smallest gang, lead by none other than Levi, and they specialize in gambling and opportunity, wherever they may find it.

“Do not reveal your emotions, especially your fear.
Never allow yourself to be lost.
Trust is a last resort.”

And with only Levi for Enne to trust, they embark on an adventure that ends up being even bigger than either of them expected. And they soon realize that there are much bigger problems in the City of Sin than these three gangs. There are two mafia-like families that truly rule this city: the Augustines and the Torrens. And Enne’s path soon crosses with a member from each of these houses.

“The worst hurt in the world was the kind you grew to accept.”

Also, in this world, all humans have a special ability or two that are inherited from their lineage. If you have one, you’re considered pure, but most people in this story have two. And there is a vast array of powers, in a varying scale of strengths! From specializing in dance, to being able to make the currency in this world, to be able to read people’s minds, there are so many different magical talents! And one of my favorite things about this book was learning what everyone inherited.

My problem was that I had a hard time connecting to the world and the characters right off the bat. But once I passed the half way point? I ended up really loving the end of this. It was so fast paced, and addicting, and I needed to know all the answers to all the mysteries. I honestly couldn’t put it down. I loved the ending so much, and I think it had the perfect setup for the next book.

I also want to mention that the main villain in this book is a grown man that has a fetish for young girls. We don’t get to see any of these terrible acts on the page, but there are many hints. But we get to see him sexually assault (unwanted touching) to a character we follow. He does some gross things, and insinuates a lot of even grosser things, so please use caution when reading this book, because I did not know going in. Trigger and content warnings for pedophilia, addiction, drug use, gambling, death, loss of a loved one, torture, and violence.

“Avarice, pride, and lust – these are all modest desires. What the city of sin craves is destruction.”

Overall, I really did think this was a fun and different story. I will for sure continue on with the series with King of Fools! Especially because I need more of Lola, who was my favorite character in this entire book. But I think this was a really great start to what I’m sure will be an even more amazing trilogy!

♤♡ Amanda Foody’s Pinterest Board and playlist for Ace of Shades!

Buddy read with Courtney from Curly Book Owl, Julie from Pages and Pens, Jules at JA Ironside, Amy at A Court of Crowns and Quills, Lourdes at Chapters We Love, & Alexis at The Sloth Reader! ❤ 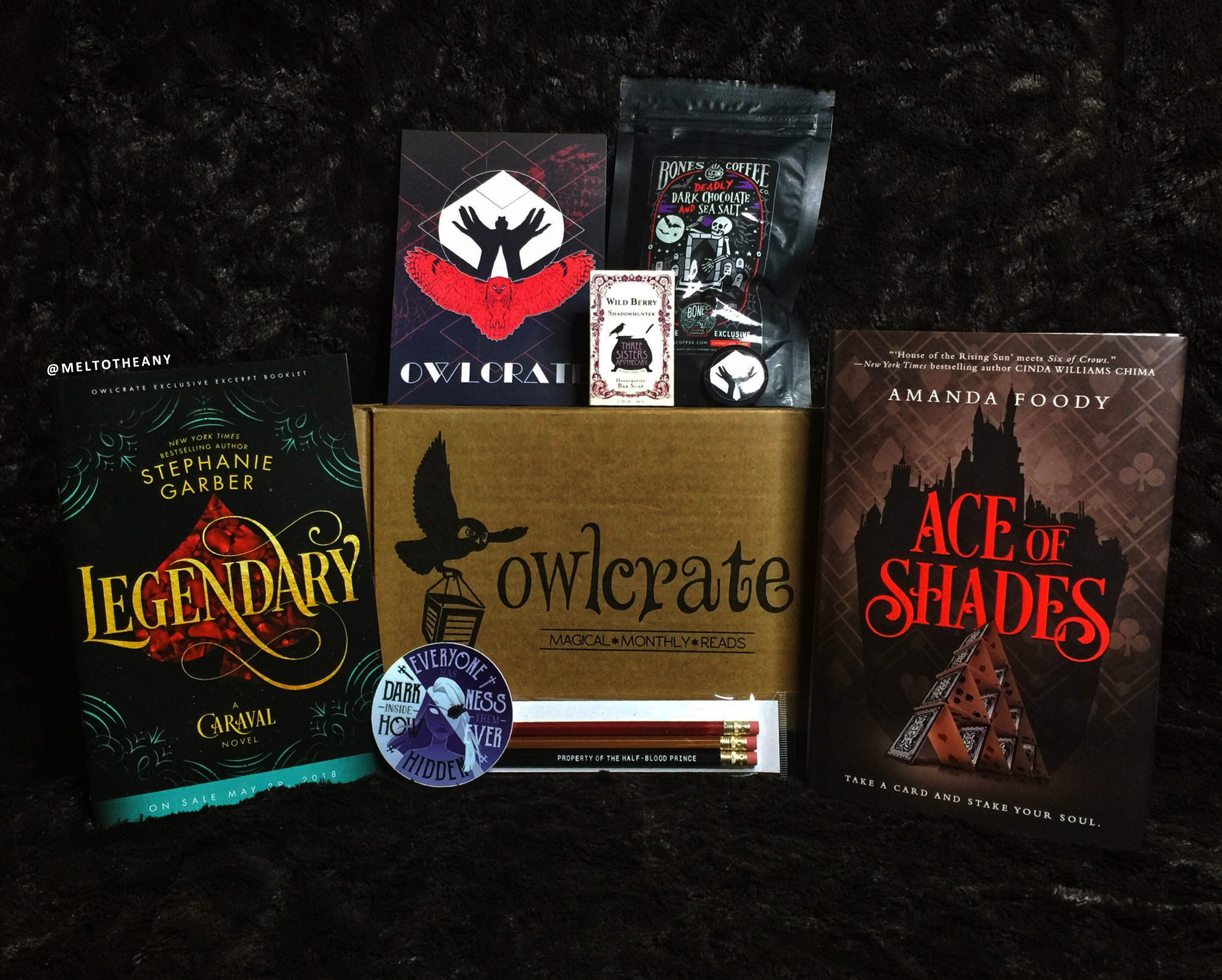 This was in the April 2018 OwlCrate box!