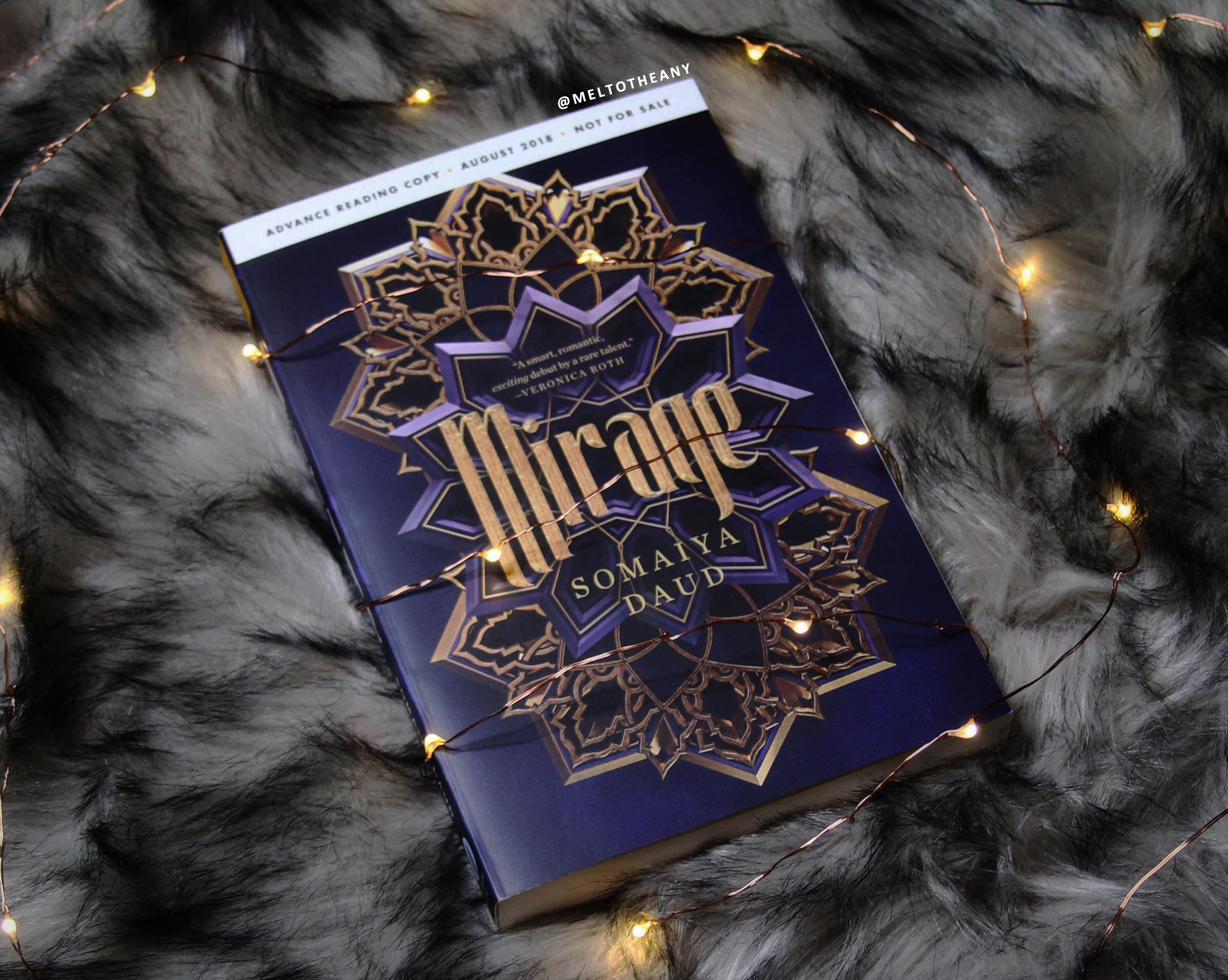 Mirage is a magical, wonderful, important, gift to the YA SFF world. From characters I fell in love with, to the messages about the importance of your culture and your family, to the most lyrical and beautiful writing. I loved this story with my whole heart, and I can’t wait for the rest of the world to fall in love with it.

This story is an ownvoices Moroccan inspired story about a young girl named Amani, who has known nothing but oppression on the moon that she and her family live on. She and her family are farmers, trying to live the best life possible, even with the constant heartbreak surrounding them.

“You learned a different sort of fear when you grew up in a village like mine. Fear of hunger. Fear of Imperial droids. Fear of the low hum that came with Imperial probes. But that fear taught you endurance—you could let its unwavering presence wear you down, or you could learn to stand up despite it.”

In this galaxy, the Vathek rule, and are slowly trying to erase other cultures, religions, and beliefs around them. While also trying to do any and everything to ensure there is no uprising or rebellion. But the rebels have been planning, and calculating, and waiting, and will do anything to make sure that the Vath do not continue to oppress and rise.

Amani has finally turned eighteen, which means she gets to finally celebrate her coming of age with others in her village. She has been looking forward to this day, and the blessing that will be bestowed upon her, for her entire life. And Amani is able to get her daan, a tattoo that means everything to her; her family, her faith, her inheritance. But the celebration gets crashed and quickly comes to a terrible end.

“I’d dreamed forever of leaving Cadiz, of visiting other star systems in our galaxy. But I’d never thought I would be taken against my will. I was dragged through the building, pulled onto a ship, silent and numb, then finally deposited in a holding cell.”

Amani gets kidnapped by imperial droids and flown to the royal empire. Upon arrival, she soon realized the reason she was taken; she is nearly identical to the Princess Maram, the heir to the throne, a girl who is cruel, and is wicked, and is disliked by both sides of her people, because she is half of the other. Maram’s father conquered Andala, and violated galactic law, so the only way he could keep the planet was to marry and have a child, so Maram was born. And Maram has a half-sister that very much does not think that Maram should rule, and she might be willing to do anything to make sure of it.

Maram is in fear for her life, so she rationalizes abducting Amani and forcing her to make her public appearances, while promising her death if she fails to be convincing. Amani is thrown into a world that she has never known, while being constantly reminded of the family, culture, and traditions she had to leave behind.

Maram’s father also murdered most of the families that lead the resistance against him conquering their planet, even though they did surrender. A boy named Idris, was spared from the Purge, as a reminder what would happen if people tried to oppose this new ruler. But he was also promised to be married to Maram once she comes of age, so she will forever be tied to the planet her father bloodily conquered.

“He a prince and I a slave in all but name. There was no happy ending to this story, no way for the two of us to make one.”

And Amani is forced to play so many roles, while she convincingly has to pretend to be a princess whose father has taken so much from so many. And Amani is therefore thrown into a world of politics, betrayals, secrets, and even love.

“We are not responsible for what cruel masters enact in our name.”

This book perfectly talks about family, culture, religion, traditions, and the things we are willing to do for them and in the name of them. Honor and believing in something are one of the most powerful, if not the most powerful, forces in any galaxy. And standing up for your convictions is sometimes the only thing we have in this world. Never, ever, stop believing.

“When Dihya wanted to give you a sign He slipped the feather into your hand. When He wanted to command you to a calling, to take action, He sent the bird itself.”

The book amazingly showcases how important friendships can be, and how loneliness can take many forms. Everyone deals with depression, grief, and trauma differently. And sometimes an unexpected friendship can be the thing that makes you feel even a little bit better. Kindness truly is sometimes the best thing that we can give to another living soul.

Overall, Somaiya Daud’s debut SFF novel blew me away. I loved this with my entire heart and soul. This book is beautiful, this book is powerful, and this book is completely captivating. I never wanted to put this down, and I can’t wait to see what comes next. Don’t sleep on this book, friends. Preorder this before it’s August 28th release!

Buddy read with Julie from Pages and Pens, Lilly at Lair of Books, Jules at JA Ironside, Amy at A Court of Crowns and Quills, & Chelsea at Chelsea Palmer! ❤.