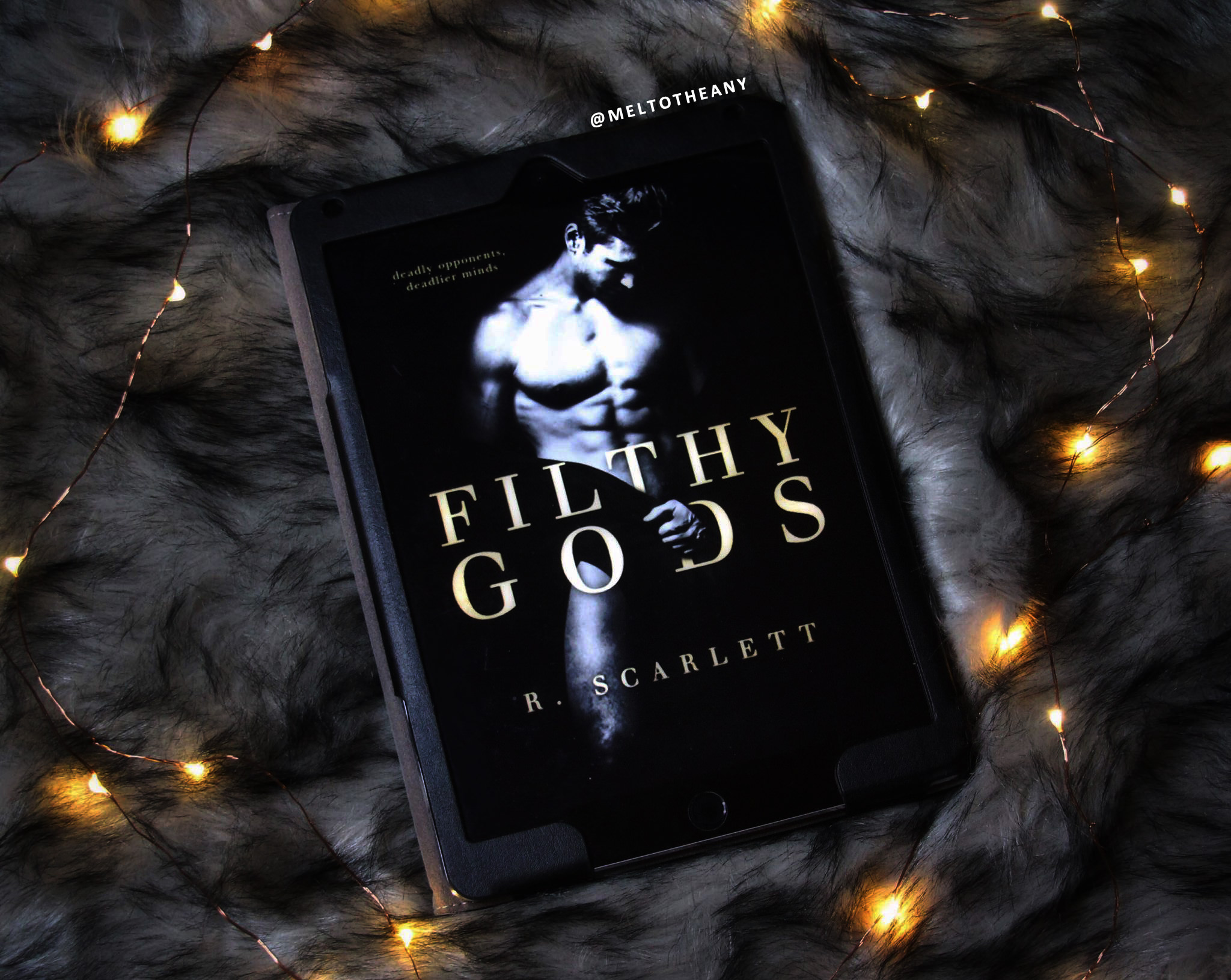 “The only thing I was afraid of was my own mortality in front of him. Gods fell in love with mortals and demolished them piece-by-piece.”

Filthy Gods has the atmosphere and feeling of The Secret History, but the romance and the sexiness of nothing else I’ve read before. Best new adult romance I’ve read all year. And my heart breaks that it’s only a novella, because I need so much more.

This is a story about a girl named Juliette, who has had to work so very hard at everything she has achieved in life. But despite not having anyone in her life besides herself, she has managed to attend Yale. And not only just attend Yale, but is one of the best pre-law students in all of her classes. Yet, there is one boy named Nathaniel, who she is rivals with, and who was born with a silver spoon in their mouth. Juliette and Nathaniel are constantly trying to one up each other, but when Juliette starts working at a country club that Nathaniel’s mother owns, the power dynamic feels very imbalanced. Especially when neither of them can stop thinking about each other, and especially because they are both going to be at the country club all summer.

“For three years, I’ve competed against Nathaniel Radcliffe. Always trying to be better, smarter, faster—anything more than him. And in a matter of seconds, all that had crumpled to soot around my sore knees.”

Together they decide that the only way that either of them is going to be able to function this summer is for them to finally get whatever it is out of their systems. And the romance in this is off the scale. Like, I truly believe these two fictional characters are soulmates! Between their banter, to them challenging each other, to their in-depth discussions about everything, to their phenomenal sex scenes, these two were a joy to read about. And you all know that enemies/rivals to lovers, will always be my favorite trope of all time.

“I wanted to pretend that my heart beating inside of me was from my hatred of him and him alone, but I knew as he kissed me, my heart had already begun to betray my mind.”

And let me clearly state that I completely understand that there is a huge power imbalance between these two main characters, but R. Scarlett does a wonderful job making sure and reassuring that everything is consensual and wanted. But there are a few trigger and content warnings for attempted rape, sexual assault, talk of death of a parent, death of a friend, physical abuse, abandonment, and talk of past child abuse. But all of these things are always challenged, and none are glorified or anything like that.

But this is a starting pre-novella to what will eventually be a three book series starring each of the four elite, rich, sexy, god-like men of Yale:
➽ Nathaniel – Star of this novella. Super intelligent, super rich, and super powerful.
➽ Arsen – Russian, with family that has all the connections.
➽ James – Addicted to adrenaline and seems like he is going to be the ultimate “bad boy” type character.
➽ Gabe – The most powerful and beloved of the four. Will probably be president of the United States one day.

“There was something untouchable, something holy and unholy about the boys. Sacred and sinful all at once. Bastards of Grace. Fame, wealth and power poured out of them. They were the things of legends and myths.”

Overall, I loved this completely and wholeheartedly. This was sexy, and romantic. This was so beautifully written and expertly crafted. This was nothing short of a treat to read. I cannot wait to see what R. Scarlett does next with this world. But if you guys are looking for the perfect little romance story, I can’t recommend this enough! Do yourselves a favor and don’t miss out on this. And Rich Boys Don’t Have Hearts is now one of my most anticipated releases, and I can’t wait to read Gabe’s story.