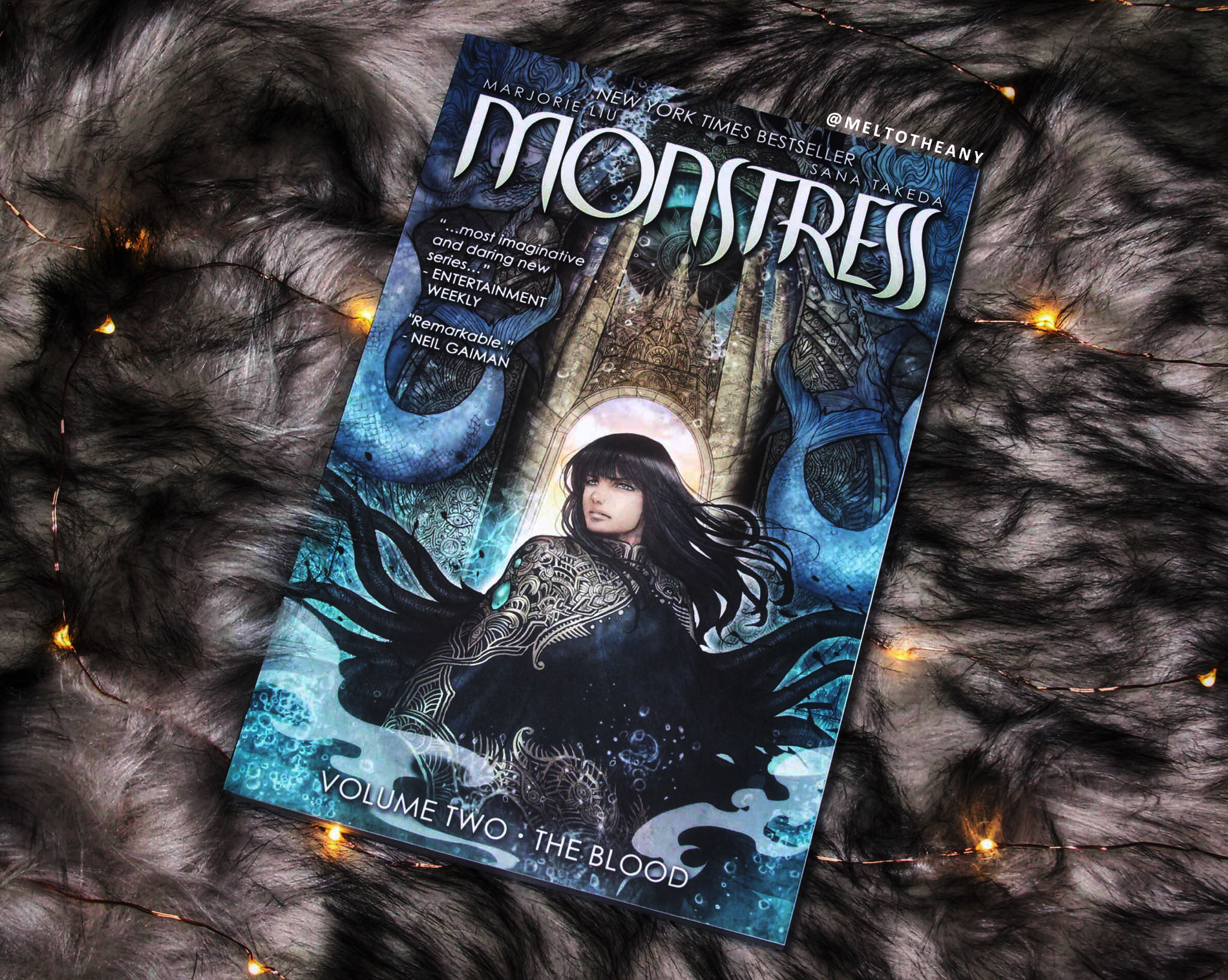 In Volume Two: The Blood, We are thrown back into this amazing world that I love so much. We are reintroduced to a girl that is living with a monster inside of her. She is being hunted, but trying to piece together all the parts that make up her past, including what happened to her mother, who taught her at a young age to be strong in a world that will refuse to ever accept you.

Moriko and her sidekicks that she doesn’t want to love, Kippa and Ren, are on a completely new adventure, which involves a ship, a pirate crew, a mysterious island, and maybe some ghosts. The banter is perfection, the art is quite literally a gift to the world, and the story is a masterpiece. This is my favorite graphic novel series of all time.

And the message about never letting anyone control you, about rising to the top of a world that wants nothing more than to drag you down, is so powerful. This graphic novel is a fantasy inspired world that is ownvoices, and this graphic novel is filled with PoC characters. Also, Moriko only has one arm, but shows the world constantly how she should never be underestimated because of her disability. This is a super diverse series, and this story is filled with discussions about fear tactics and hate speech, and shows how easily hate speech can turn into hate actions.

Trigger and content warnings for a lot of blood, a lot of gore, and a whole lot of violence. Slavery, war themes, child abuse, animal cruelty, experimentations on unwilling living creatures, and one pretty dark birthing scene. This is a very dark graphic novel, please use caution.

But this series is so perfect, and I truly believe it is a tier above anything else out there right now. If you feel like you are in the right mindset, I can’t implore you enough to pick Awakening up and give it a try.

➽ CHAPTER SEVEN –
We are reintroduced to Moriko, and we get to revisit the monster that is trying to very hard to escape her. Kippa is the best character in all existence. Ren is second best. And I love all the cat people, so much, even when they are bad sometimes. Moriko finds a bone key and procures a ship and a crew to take her to an island that might have the answers about her mother.

➽ CHAPTER EIGHT –
Moriko talks about how it has always hurt her that she never received any Goddess-marks to easily show that she is like the other Arcanic children, even though she carries so much power within herself. And then we see a new monster that lurks in the sea below, right before the ship is attacked.

➽ CHAPTER NINE –
We get to see some flashbacks of Moriko’s mother teaching her, but we see how hard her mother was on her. Honestly? It just made me want to protect her even more. Also, Kippa is smart, perfect, and oh so loyal. I love her more than words.

➽ CHAPTER TEN –
This issue had some of the most beautiful art I’ve ever seen in my entire life. I could frame something on every single page. Perfection. But Moriko, Kippa, and Ren are on a smaller boat, heading to the island together. And the bone key comes into play, in a pretty amazing way. But once they get to the island, they quickly realize they are not alone.

➽ CHAPTER ELEVEN –
I loved this issue, because we get to know Moriko’s monster a little bit better through more flashbacks. And I’m loving all these breadcrumbs so much. And Moriko also gets more knowledge about her mother, but for a price.

➽ CHAPTER TWELVE –
Oh boy, this concluding issue left me needing the next volume this very instant! Also, I know I shouldn’t, but I love the ferryman. Moriko is able to put on the part of the mask she has in her possession, but someone else senses it immediately; her father.

Again, this graphic novel is everything to me. Marjorie M. Liu & Sana Takeda are a gift to the world, and I will read this series for as long as they create it. If you’re looking for an adult, high fantasy, dark, ownvoices, Asian inspired graphic novel series, please pick this up. From the art, to the characters, to the mysteries, to the messages, this is a masterpiece in every single way.