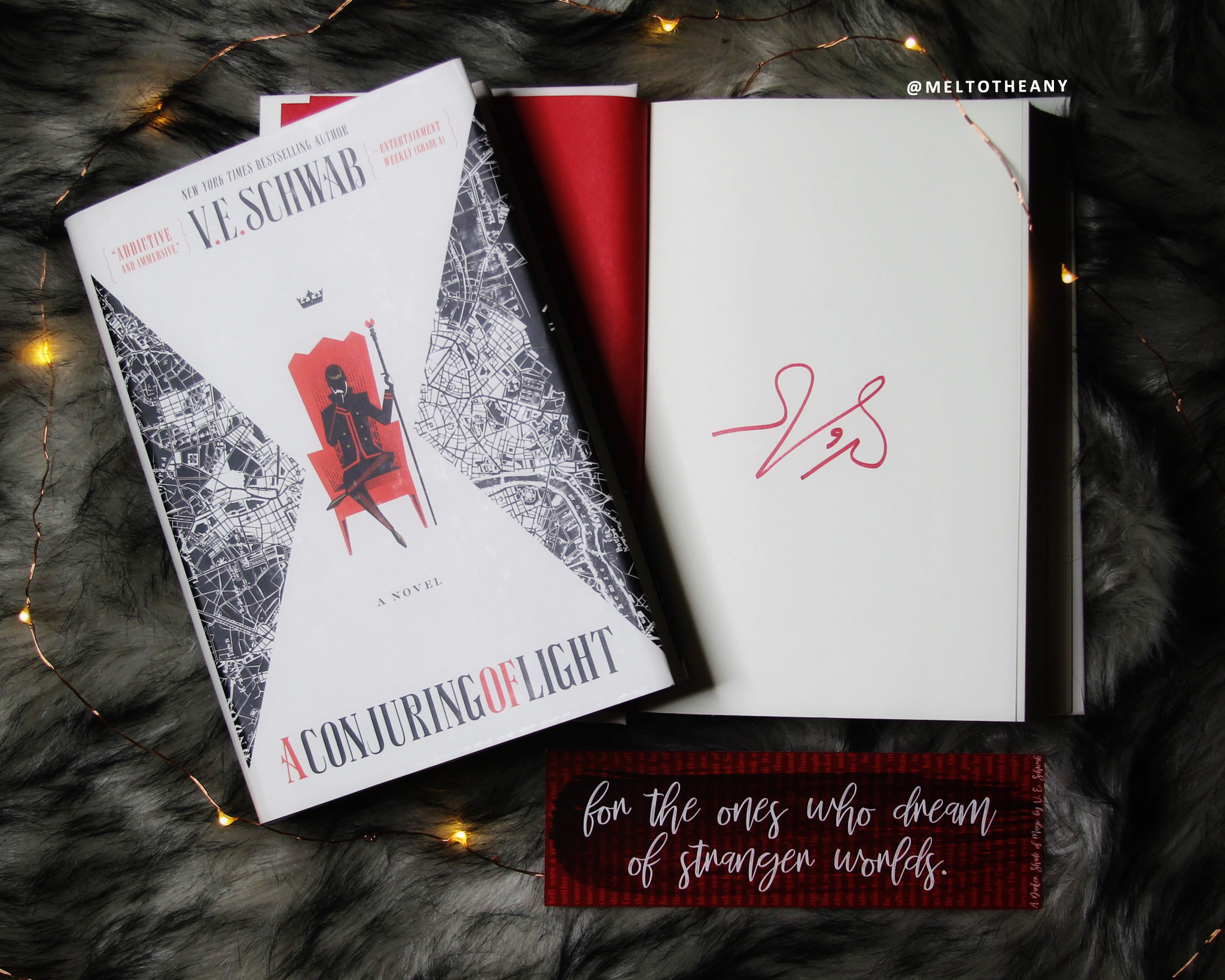 “Love and loss,” he said, “are like a ship and the sea. They rise together. The more we love, the more we have to lose. But the only way to avoid loss is to avoid love. And what a sad world that would be.”

I have read one book in this series every year for the BooktubeSFF Awards. And every year I enjoy what I’m reading, I close the book pretty pleased, and then I sit down to write my review and start thinking about how these are such big books with so little happening. And I know they are character driven. One of my favorite books of all time is the most character driven thing out there, but for some reason I just don’t love this series like everyone else does.

A Conjuring of Light is the third and final novel in this trilogy that surround four different parallel Londons:
➽ Grey London – is like our real world’s London, with no magic. Delilah Bard is from this London.
➽ Red London – is the home of the main protagonist, Kell, where he and his royal family rule. There is an abundance of magic in this London, most coming from a red river which lights up the whole city.
➽ White London – is a city in war with itself. It was ruled by evil twins, but now has a new king. Everyone in this London tries to fight for magic and power within this corrupt city.
➽ Black London – and is still basically a mystery. It is essentially a lost city, since regular people cannot travel between worlds.

And after the brutal cliffhanger ending that was A Gathering of Shadows, A Conjuring of Light picks right back up after the events! And without saying anything too spoilery, since this is the concluding novel and all, our main character, Kell Maresh, and his home, Red London, are in serious danger. But with the help of a ruthless thief/assassin, Lila Bard, a swoon-worthy pirate, Alucard Emery, the best prince to have ever lived, Rhy Maresh, and a very morally grey Antari, Holland Vosijk, they are trying to save everything they’ve ever known and loved.

“Life isn’t made of choices, it’s made of trades. Some are good, some are bad, but they all have a cost.”

And even the idea of four different color coded Londons, with a handful of magical people who can travel between them, is so damn genius that I don’t even have words for it. Also, V.E. Schwab is such a talented writer. The way she echoes phrases from different books, or even sentences from previous chapters, is so powerful and is able to evoke all the emotions from me. She truly can weave and craft paragraphs together so expertly and I’m constantly impressed with her writing.

I just feel like not a lot happens in her books. Like, a few big, key, important things happen without question, and storylines get completed, but I just feel like it is such a longwinded journey to get there. And these books are so easily consumable that you don’t really realize until after you’ve closed the book. I mean, at least for me and my personal reading experiences. Seriously, go back and look at my other two reviews; I say the same thing. Also, the big bad villain just fell so very short for me. The magic started off so dang well, but the villain really ended up feeling lackluster to me.

But my biggest complaint about the other two installments in this series is that they don’t read or feel adult to me. But you know what A Conjuring of Light reads and feels like? Adult, without question. Also, just a little caveat, if an author says their work is in a certain age bracket/genre, then it is. I am just saying A Darker Shade of Magic and A Gathering of Shadows don’t feel or read like adult fantasy to me, but I’m not saying they aren’t. But ACOL did give me those brutal moments that made me go “okay, this isn’t YA” quite a lot.

Also, trigger and content warnings for abuse, torture, abduction, slavery, captivity, talk of suicide, violence, gore, heavy blood depiction, abandonment, and depiction of grief and PTSD. Oh and I guess sexual content, too, but nothing too graphic. (Also, hello, perverted Melanie here to report that that sex scene was 11/10 and was so smooth and sexy and I actually loved it!)

“I have never known what to make of you. Not since the day we met. And it terrifies me. You terrify me. And the idea of you walking away again, vanishing from my life, that terrifies me most of all.”

But my biggest love for this series is Rhy Maresh, who has completely and without question stole my heart. He is easily my favorite character in this series. My beautiful, pure, cinnamon roll, unbreakable boy. I stan one man from this series, and it’s him. And he deserves everything good in the universe. Overall, take this review with a large grain of salt. I am for sure in the minority with not loving these books as much as everyone else. And even though this isn’t my favorite series, I think Victoria is incredibly talented and I can’t wait to see what she does next. And I truly think that these books get better and better, with A Conjuring of Light being my favorite in the series, and the last couple chapters of this book had me smiling from ear to ear in pure happiness. And I ultimately do feel really fulfilled and happy with the ending. Plus, I’m very interested (especially after gushing with my friend Julie) with reading the graphic novel series set around a character from this world. Also, I have the highest of hopes for the spinoff that Victoria is working on. I just hope I fall completely head over heels in love, instead of only just enjoying.