Hey, friends! As many of you may know, I participate in the BookTubeSFF Awards every year and I love it so very much! I always try to pick up some of the books that I haven’t read that have been nominated, and then pick the winner of each category for me, personally. And even though I really slacked this year, I figured I’d still share my favorites with you today!

The voting for the actual winners opens up on June 1st and closes on June 7th! The live show, where all the judges will discuss the nominees and announce the winners, will be held late June!

But here are all of the different categories, with my reviews and star ratings linked if I read, and who I think should be crowned the winner of each category! 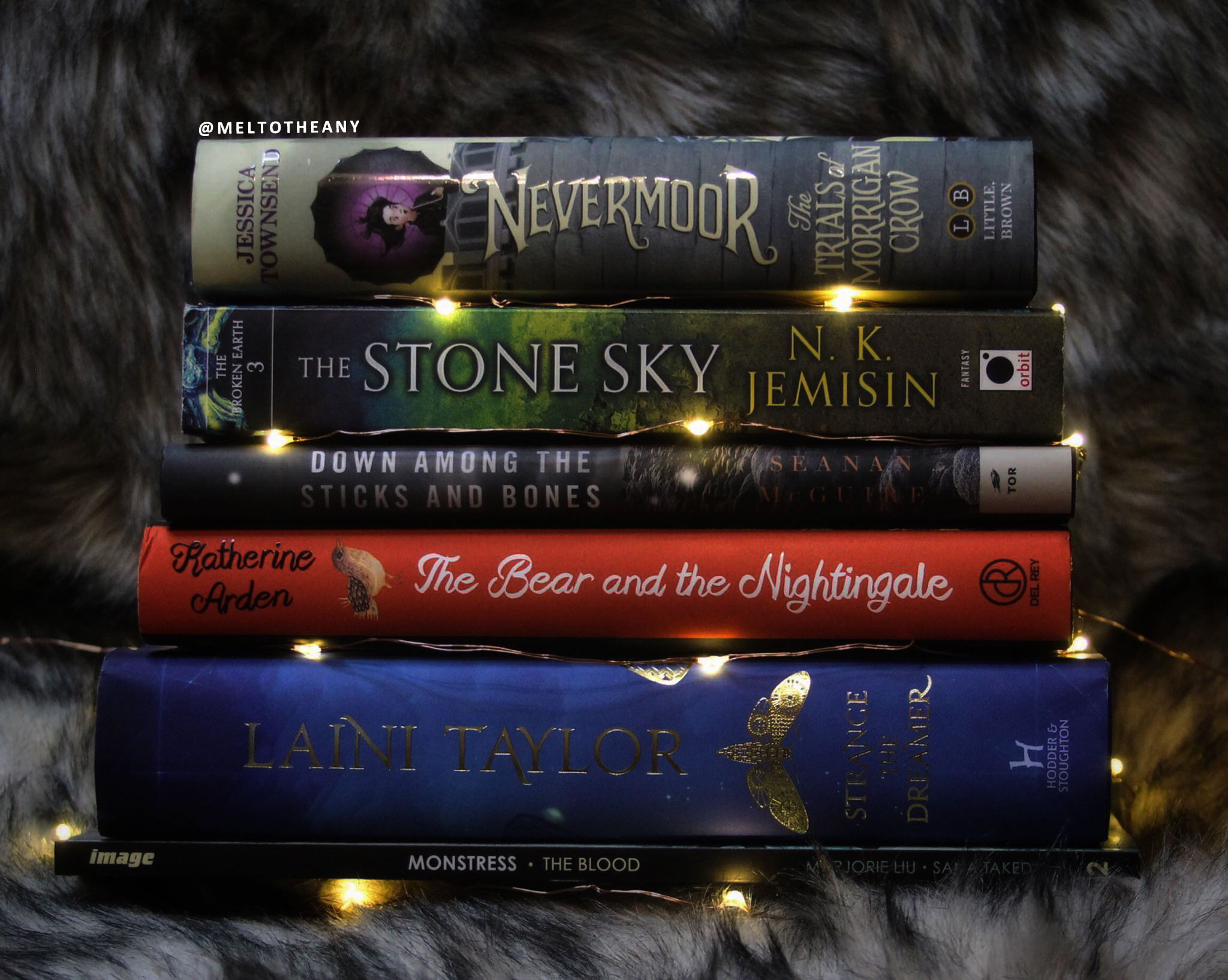 This category truly guts me, but I have to go with The Stone Sky always and forever. The trilogy is a masterpiece in general, and that final book is one of the most perfect concluding novels I’ve ever had the honor of reading!

Yeah, I five starred ALL three of these. Oh, cruel world! But The Bear and the Nightingale is the best debut novel I’ve ever read in my entire life.

I don’t even feel bad about this one, because Strange the Dreamer was my favorite book of 2017. Obviously, it deserves to win everything.

➽ Best Middle Grade:
Whichwood by Tahereh Mafi / #1 ★★★
Magnus Chase and the Ship of the Dead by Rick Riordan N/A
💛 Nevermoor: The Trials of Morrigan Crow by Jessica Townsend ★★★★★
The Dreadful Tale of Prosper Redding by Alexandra Bracken ★★★★★

I’m a little torn on this one, just because I did really enjoy Nevermoor, but it took me forever to read! Plus, I also really loved Prosper Redding, but I just think I’ll carry Nevermoor with me longer.

➽ Best Graphic Work:
💛 Monstress, Vol. 2: The Blood by Marjorie Liu and Sana Takeda ★★★★★
Everyone’s a aliebn when your a aliebn too by Jomny Sun N/A
My Favorite Thing Is Monsters by Emil Ferris N/A
Paper Girls, Vol. 3 by Brian K. Vaughan / Vol. 1 ★★

This is another I should feel bad about, especially because I’ve heard such good things about My Favorite Thing Is Monsters, but Monstress is my favorite graphic work of all time. I couldn’t not pick it.

➽ Best Short Work:
💛 Down Among the Sticks and Bones by Seanan McGuire ★★★★★
All Systems Red by Martha Wells N/A
Binti: Home by Nnedi Okorafor / #1 ★★★★

Few things in my bookish life mean more to me than Seanan McGuire’s novellas. And Down Among the Sticks and Bones is my favorite in this series, to date.

I know, I’m terrible, but I’d pick Yoon Ha Lee because I’m such a fangirl of their work, but I can’t believe I haven’t picked up Raven Stratagem yet!

Okay, there you have it! Those are my picks! Do you guys feel the same? Did you participate in the BooktubeSFF Awards too? Let me know! And I’m wishing you all the happiest of reading always! And if you’re interested in seeing my picks for the 2017 BooktubeSFF Awards – Click here!

➽ Also, don’t forget to check out the amazing hosts of this event:
🌑 Samantha from Sam’s Nonsense
🌒 Frankie from Frankie Reads
🌓 Kaitlin from Kitty G
🌔 Rachel from Kalanadi
🌕 Thomas from SFF180
🌖 Connor from Connor O’Brien
🌗 Sam from Thoughts on Tomes
🌘 Chelsea from TheReadingOutlaw
🌑 Elena from Elena Reads Books