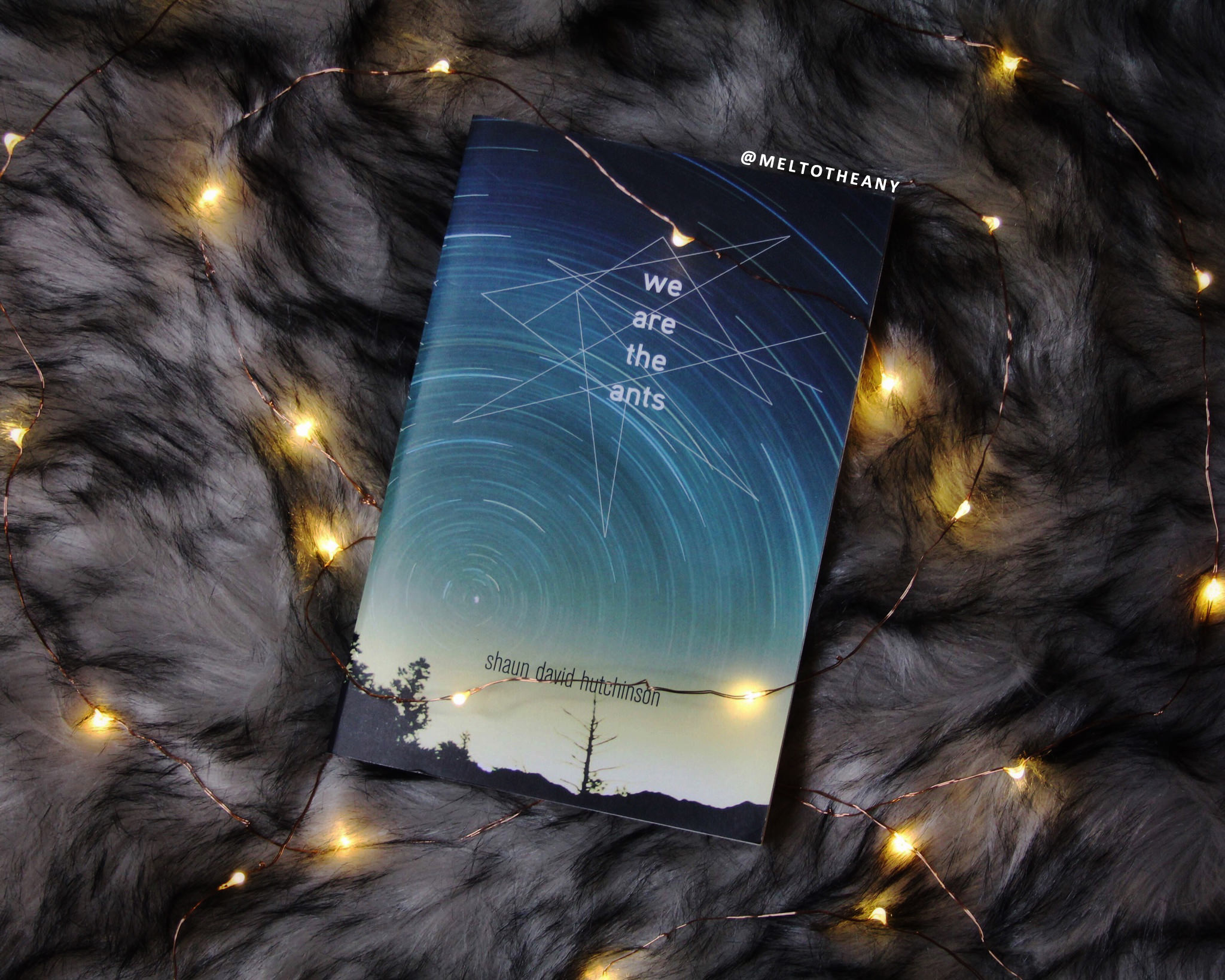 “We may not get to choose how we die, but we can choose how we live. The universe may forget us, but it doesn’t matter. Because we are the ants, and we’ll keep marching on.”

We Are the Ants is a really beautiful story about being a teenager, being gay, and not being accepted. This is a story about heartbreak, loss, grief, and trying to figure out who you are in the midst of it all. I’ll be honest, I didn’t love the start of this book, but I completely fell in love with the middle and end. And I totally understand why so many of my friends hail this as their favorite book of all time.

But the reason I’m giving this four stars is because the first part of this book felt just so vulgar. Like, maybe it’s because I’m a grown woman and I don’t want to read about teenage boners, but like the first part of this book just reads crude and bad. I was honestly scared I was going to end up hating this book. Which would have really surprised me, because Shaun David Hutchinson’s short story in the All Out Anthology was my favorite in the entire collection. It was so beautifully written, so lyrical, so immersive, so empowering. And luckily for me, I didn’t give up hope, because We Are the Ants ended up being all of those things, too.

“That’s the problem with memories: you can visit them, but you can’t live in them.”

This book stars a young boy named Henry who is grieving the loss of his boyfriend who recently committed suicide. His home situation isn’t great either, from a mom that is also unhappy, a brother that is abusive and making some big life changes, and a grandmother who can hardly remember his name. Also, Henry is the joke of his high school and has been dubbed “Space Boy” because he frequently gets abducted by aliens, regardless of who believes him or not.

We get to witness some of Henry’s alien abductions, but on one particular visit, he is given a choice to save the world or to leave it for impending destruction. Henry has 144 days to decide if the world is worth saving.

“If you knew the world was going to end, and you could press a button to prevent it, would you?”

This book does deal with so many heavy topics, so please use caution and make sure you are in the right mindset. Trigger and content warnings for attempted rape, sexual assault, outing, suicide, a lot of physical abuse, extreme bullying, homophobia, homophobic slurs, drug addiction, alcoholism, grief, depression, abandonment, loss of a loved one, talk of self-harm/cutting, and having a loved one with Alzheimer’s disease.

Another important aspect I love in this book was the depictions of adults. First off, Henry’s mother is dealing with so many things, and so much heartache of her own, and she doesn’t hide it. I’m not saying everything she did was healthy, but it’s realistic and I think it’s something really important for more teens to read and see that they aren’t alone. High key, Ms. Faraci was my favorite character. I seriously loved that teacher and her honest advice that sometimes awful people do indeed succeed in the world, but it doesn’t mean that they will always be in your life. I also just loved seeing a teacher care about a student the way that she did with Henry. It was truly heartwarming and meant a lot to me.

Another really real and raw theme of the book is how we use other people to fill a void left by someone else. And how we will make excuses and justifications for the only person who is making us feel something, even if they are abusive and manipulative. This just really spoke to my soul, honestly.

I wouldn’t say that this book is about romance, but there is a romance element and let me climb up on the rooftops and scream that the love interest in this book is a Latinx Pansexual boy! You all, I was not expecting pan rep in this book, and even though the actual word is not on the page, my heart was so damn happy.

Overall, Shaun David Hutchinson has now impressed me twice in 2018 and I’m no longer going to sleep on his work. I think he’s so immensely talented, and all the elements that are a part of his stories are honestly life changing and saving. And I hope you all might consider picking up We Are the Ants and get blown away, too.

“Depression isn’t a war you win. It’s a battle you fight every day. You never stop, never get to rest. It’s one bloody fray after another.”

This story is truly holds such an important discussion about mental illness and how it is something that you have to always manage and keep up with, because it never goes away, no matter how many alien abductions happen. And I’m going to leave some numbers here:

Also, I found all of these resources from The Astonishing Color of After by Emily X.R. Pan, which is another amazing book that I completely recommend for anyone looking for more books that center around mental illness. And I’m obvious not a therapist, but my DMs will always be open for anyone who just needs a friend to talk to. You are deserving of love and happiness, sometimes it just takes a little while to find those things, but I promise you are worthy of them. And I promise that you matter.

Buddy read with Alexis and Lily! ❤

15 thoughts on “We Are the Ants by Shaun David Hutchinson”