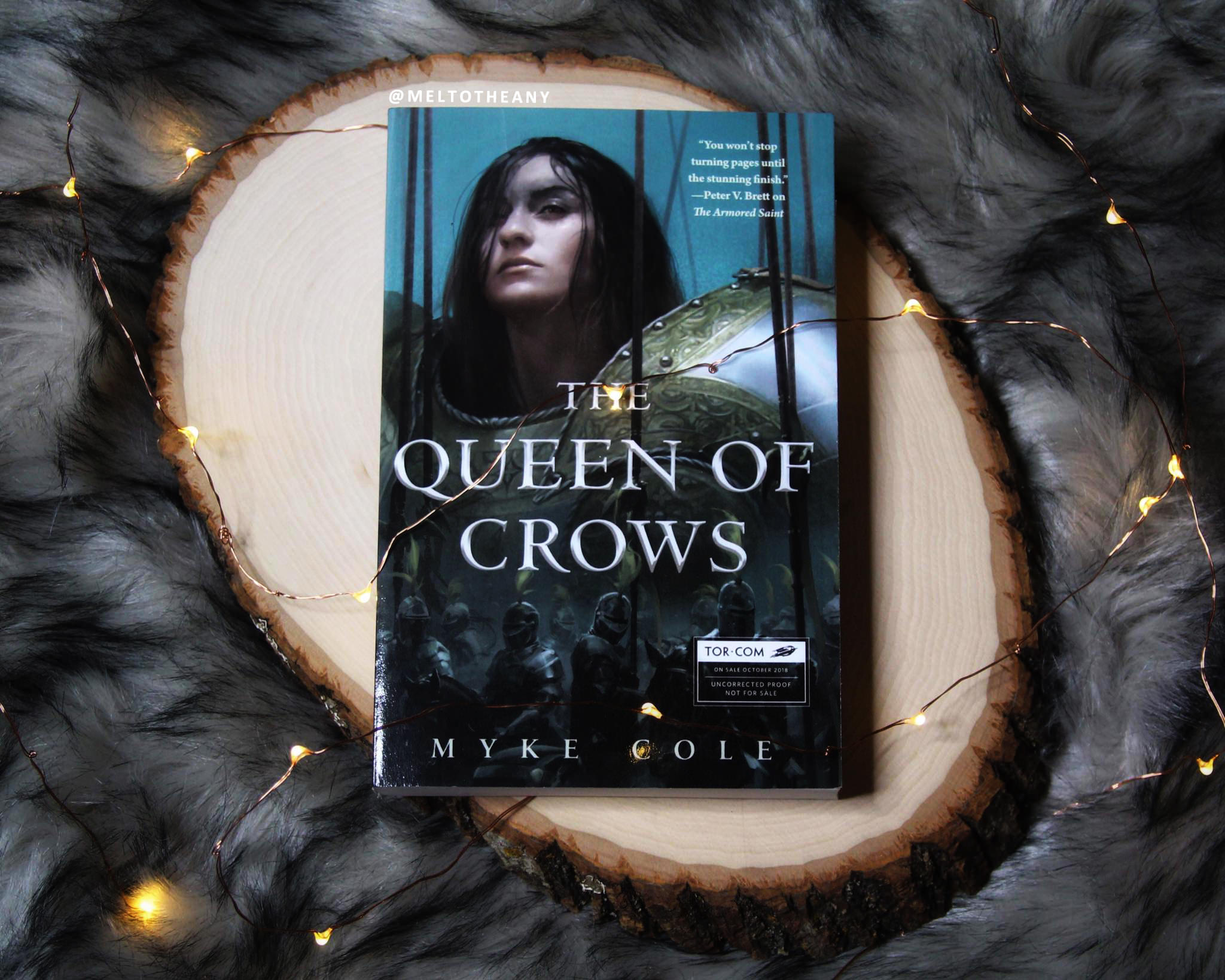 “I want to live in a world where everyone, no matter who they are, dies from growing old, and not because someone else killed them for their own good.”

The Armored Saint was my second favorite ARC that I read in 2017. It will still, without a doubt, make my best of 2018 list come December. But for some reason this second book just didn’t captivate me and wow me the way that book one did. I still really enjoyed this, and Myke Cole’s writing is so damn good that I could highlight half of this large novella, but I just didn’t love The Queen of Crows the same way I did The Armored Saint.

Me and Petrik were discussing this book after our buddy read, and we both feel like maybe it is because we let six+ months pass in-between picking this next installment up. The Queen of Crows starts off with quite the bang. Actually, the bangs just keep coming. So much happens at the start of this book that it somehow makes it hard to connect with Heloise. If the things that happened to her in this book happened at the end of The Armored Saint, I know I would have been crying and been an emotional wreck in general. But I just felt such a disconnect because they happened right off the bat in this book. Which again, could totally be my fault for not rereading the first book before jumping into this one.

But as I said above, this book immediately starts out right after the events of The Armored Saint. Heloise is now the face of a budding rebellion, even though not everyone wants to follow her. The Order is a group of religious tyrants that do horrible things to the wizards in this world, and to the people that are protecting and/or harboring the wizards in this world. But the Order also just does cruel and heartless things to do cruel and heartless things, you know, like most dictatorships. And in the first book, Heloise not only befriends a wizard, but does something so incredible that she is now very wanted by The Order.

“When they’d beaten the Order before, they’d had a wizard with them. Now, there was only Heloise, her machine, and the supposed favor of the divine Emperor.”

This action-packed novella centers around Heloise, her family, and what is left of her village, trying to get some sense of stability and safety back in their lives. But they meet a lot of new people while fleeing from the only home most of them have only ever know. I loved the introduction of the new people that Heloise meets in this book. The Traveling People were amazing, and I loved every single scene with them in it, especially Mother Leahlabel. Also, Myke weaves in such an important conversation about the prejudices and the stereotypes that we put on people from cultures we are ignorant about.

Heloise and her people spend the majority of this book prepping for a siege. Most people think the most difficult part of a siege is fortification and keeping your people unharmed. But Heloise realizes quickly the other important elements of a siege: clean water, food, clothes, medications, wood, and everything else you need to live a normal life. Oh, and loyalty. You need a whole lot of trust and loyalty.

“I don’t want to lose anyone else. Not to the Order, not to the road, and not because you stand on pride because it’s not a man grown leading the way for once.”

Heloise’s sexuality is brought up a bit in this book, but you all know my queer heart wanted more. But I am totally ready for what I think Myke is crafting. Heloise completely acknowledges that she likes only girls in this book but seeing her realize that she may be able to love again is something so beautiful I don’t even have words for it. Heloise is such an easy character to root for, and if I’m being completely honest here, Heloise Factor deserves the damn universe and every single star in it.

This series has a very dark tone and feel, which is one of the things I absolutely love about it. But I know that it won’t be for everyone. So, please use caution. Trigger and content warnings for heavy war themes, violence, blood depiction, gore, torture, a somewhat graphic animal death, death in general, and loss of a loved one.

“She was in a war-machine and he was just a man.”

Overall, I still really enjoyed this. I swear, it’s such a high three star rating. Hell, even just writing this review, I am tempted to boost it up to four just because the writing and themes in this series are so good, so important, and so needed. I will eagerly await to see how Myke Cole wraps this all up. Also, I’m so excited to see a lot more of Xilyka