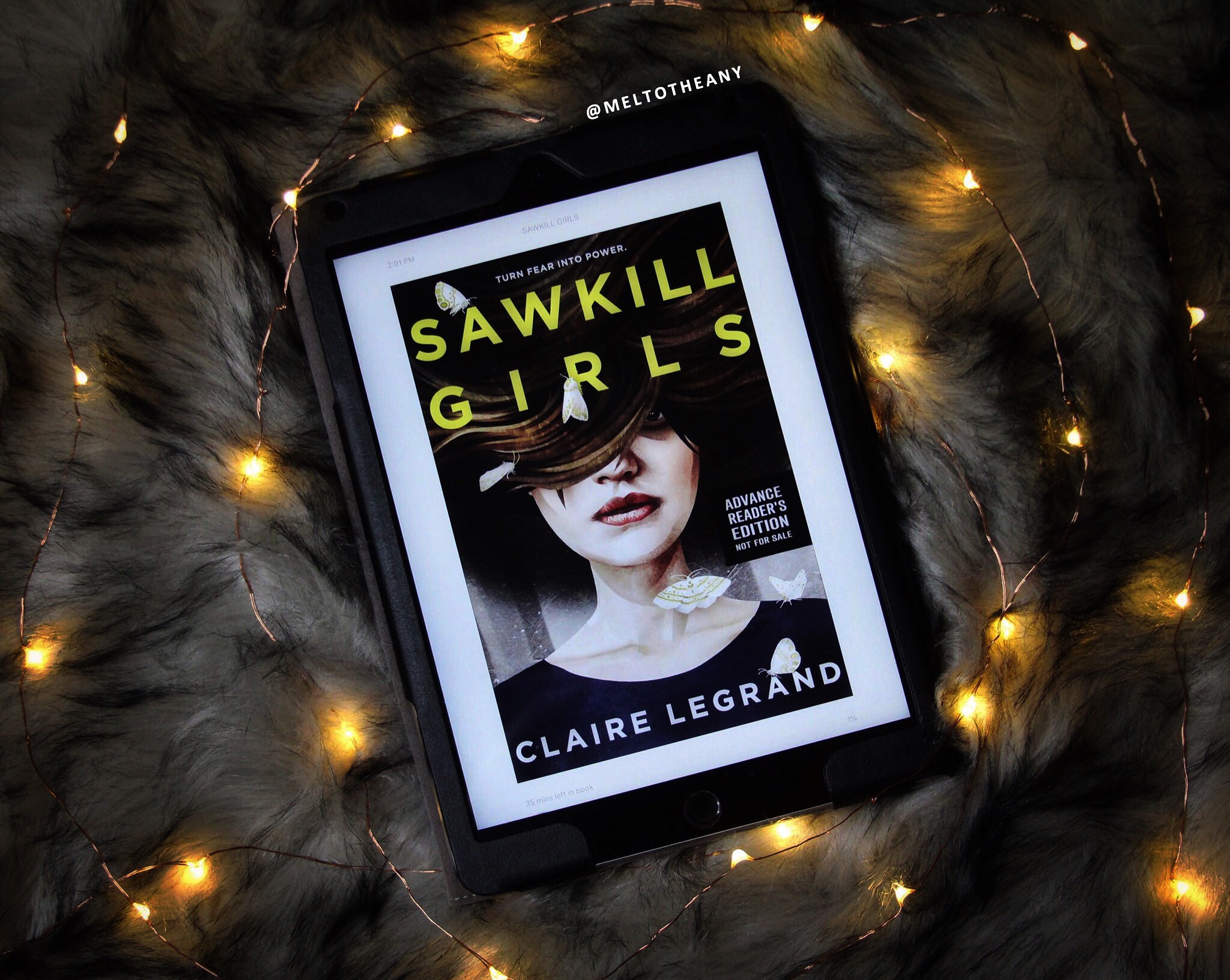 “Decades of dead girls. Poor girls and rich girls. Black and brown and white girls. All of them Sawkill girls.”

Sawkill Girls is going to be such an amazing, atmospheric, spooky Halloween read for so many. The start of this book was phenomenal, and the first half was five star worthy in my opinion. I just, didn’t love the ending of this, but I think many of you will. And overall, I completely recommend this, and I had such an amazing time reading this creepy tale.

Sawkill Island has never been safe for young girls. More and more frequently young girls have gone missing, without their bodies ever being found. There is a local legend about a paranormal beast called The Collector, who hunts and feasts on these young girls, while simultaneously growing stronger himself. But we also soon find out, there is no way that the Collector is capturing these girls on his own.

We are introduced to three girls, whose stories and fates interweave, regardless of what they have to say about it. And only these three girls have the power to save the island. That is, if they are willing to come together and try.

➽ Zoey – Black, bi (not on page but stated attraction to boys and girls), and asexual. Also, such a damn blessing. Recently lost her best friend to the tragedy of the island. Her father is the local sheriff.

➽ Marion – Plus sized, likes girls, but I don’t believe Lesbian, pan, bi, or any other label is said or implied. But she does start a relationship with a girl in this book (and holy shit, it’s so good)! She is also dealing with the loss of her father, while trying to be the support system for her mother and her sister while they move to this island.

➽ Val – Queen bee of the island and hiding a dark secret that she shares with her family. Also, her sexuality is never stated on page, but she talks about relationships with boys and has a relationship with a girl.

Honorable mention and honorary fourth member:
➽ Grayson – Zoey’s best friend and ex. My favorite character in the entire book. I would honestly die for this boy.

“Tragedy had touched Sawkill, again and again and again, but after each girl’s disappearance, once a respectable amount of time had passed, everyone seemed to stop caring.”

These three girls come together and try to figure out what is killing these girls and if there is anyway to stop it from happening to them. At first, this book feels like you’re reading it through a fog, where you aren’t sure what exactly is going on. But mystery after mystery is eventually answered, and a beautiful tale of friendship, womanhood, and love is unfolded. I mean, it is unfolded after and during some really dark, gory, and violent scenes. This is for sure a horror book.

I really want to emphasize that this is a dark book. Please use caution and make sure you are in the right mindset while reading. Trigger and content warnings for loss of a loved one, somewhat detailed murders, violence, gore, a lot of talk of blood, grief, abuse, parental abuse, underage drinking, talk of miscarrying, sexual abuse (unwanted kissing, and maybe touching), animal death, scene with a girl purposely cutting open her palm, use of the word “fat’ negatively, and a really acephobic comment that is completely challenged and apologized for (but I know that it can still be really hurtful to read).

And just to talk a bit more about it, Sawkill Girls centers around grief, trauma, and loss. It also heavily talks about how we are not the mistakes or the problems of our parents, even though they could heavily impact our own lives. Each girl has their own heartache. Marion, being forced to keep her mother and sister safe after losing their father, while never allowing herself to grieve. Zoey, for learning how to live after pushing someone who loves you away and after losing your best friend. Val, for struggling to please her mother, while being abused by her mother, while never being able to leave her mother.

“There was a magnetism to the Mortimer women, and they knew it, and they used it. It was their right, this witchery; they’d given up their souls for it.”

And Claire Legrand is blessing us with sexual representation in this book. Not only do we have a swoon worthy f/f romance that I was so there for from the very start, but she also gives us the best asexuality representation I’ve read in a book to date! And the word asexuality is used on page, the stigmas and stereotypes are discussed very thoughtfully, and my heart is so full. Also, full disclosure: I do not ID on the ace spectrum, but I did at one point in my life.

This story also heavily discusses how girls are raised in a world that is constantly pitting us against one another. How this competitiveness is instilled in our blood, and bones, and very being by society. How men make gross jokes like “this is why girls can’t work together” and other disgusting comments along those lines, because it helps reinforce these stereotypes. How we are born to waste time trying to raise ourselves above other girls, when we could come together and raise each other up equally.

“Girls hunger. And we’re taught, from the moment our brains can take it, that there isn’t enough food for us all.”

And this story is so very feminist, and Claire weaves the undertones, flawlessly, in every scene. I mean, this is a story about three girls, from very different backgrounds, all harboring their own individual pains and hurts, coming together to defeat a monster. But it is also about how we view girls as both the most vulnerable prey, but also the most sacrificable objects. And how if a problem doesn’t impact white, cis, dudes, the problem isn’t going to gain priority to get fixed.

I won’t lie, and I said it above, but I didn’t love the ending of this book, but (just like reading) I think it will be subjective. I was really hoping for a certain ending, and I was a little disappointed when it didn’t come to fruition. I also wasn’t in love with The Collector. I mean, you’re not supposed to be in love with him, but once we learned more about him, I just wasn’t impressed. Which, again, is why I think I fell so in love with the first half of this book, because the mystery surrounding him was so good!

Overall, I really enjoyed this standalone! Also, at this point, I think I’ll just preorder what Claire Legrand does next, because she’s an author that just keeps impressing me, and my queer self. Seriously, the sexuality representation in this book is such a blessing. Also, there is a moth that reminds me of Sarai, and I felt personally attacked in the best way possible. I love the entire vibe and aesthetic of this book, and I truly think it’s going to have such an impressive impact come October!