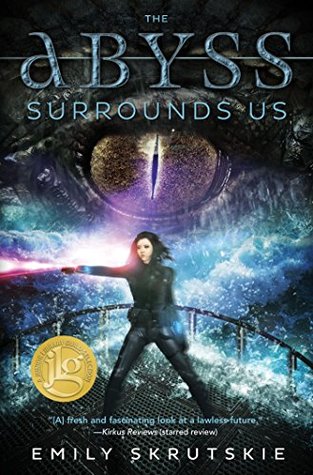 “I don’t just raise monsters. I am one.”

One of the best book recommendations I’ve received to date is Elise recommending me The Abyss Surrounds Us. Friends, I fell totally in love with this story and it surpassed every high expectation I had for it. The writing is addicting, the story is so unique, and this book holds my now favorite enemies to lovers, angst-filled relationship of all time. Oh, and it’s between two girl pirates. Sold yet? You should be. This book was a gift.

First off, this book is set in a future version of United States where most of the country is underwater. And the few that can afford to live on land are very wealthy and very privileged. All over the world there are floating cities, and children being born that have never stepped foot on solid land. And with all of this being said, ships, boats, and other water vessels are the main mode of transportation.

Cassandra Leung is a seventeen-year-old, Chinese girl who has grown up outside of LA, where her family raises Reckoners! Reckoners are lab-created, monster-like, animals that can be a terrapoid (turtle-like), cephalopoid (octopus-like), serpentoid (snake-like), and probably even more! And they are very needed by the ships on the open seas, whether it be cruise ships, cargo ships, or any and all in-between, because they need protection from pirates that dangerously sail in the same waters. Cas and her family ensure that these different types of Reckoners bond with their buyer’s vessels to protect them at all costs. And on each vessel, a Reckoner trainer must also go to ensure everything goes smoothly.

Cas has never went on a mission by herself before, but her parents are finally allowing her to prove herself alongside her terrapoid, Durga, who she has bonded with since she was a young girl. But Cas quickly finds out that maybe Durga isn’t healthy enough for the journey, but it’s a little too late once pirates are sighted.

“So not only have I been captured by pirates—I’ve had the misfortune of being taken in by theatrical ones.”

Pirate Queen, Santa Elena, and her crew quickly board and just as quickly take Cas prisoner once they see that she was in charge of the Reckoner for the ship. And that’s because they are currently hiding their own little secret that needs someone with the experience and training that only Cas has. (Also, I am so in love with Bao, my little vicious bun!)

“Bao is, without a doubt, the most dangerous thing in the NeoPacific. And he answers to me.”

This book actually got pretty dark in parts, so please use caution! Trigger and content warnings for violence against animals, animal death, animal cruelty (behind the scenes), kidnapping, captivity, thoughts of suicide, attempted suicide, talk of slavery, physical abuse, and violence.

And while Cas is forced to live on this new ship, she learns that maybe she isn’t so different than the people she’s been protected from her whole entire life. And, like I said above, this little book has one of the best w/w stories I’ve read in a long while. The angst, friends, the damn angst. It’s actual perfection! I was screaming, I was crying, I was living for it. And I totally get that this is a book about people doing stuff on ships, but like, I ship these two girls so much that it hurts. I need book two immediately. And obviously from what I said above, there is an uneven power dynamic, but that’s the beautiful thing about this relationship because it is always addressed, constantly.

“We’re two trapped girls with nothing but each other on a ship of people who’d be better off with us dead, and somehow on top of that we’ve managed to do the one thing we shouldn’t be able to do.”

And we get to see this beautiful journey, not only across the water, but inside of Cassandra’s heart and mind. She didn’t know the world before she finally got to see it. And now she’s seeing things that she is unsure that she can ignore. Cas becomes the very definition of a morally grey character, but seeing her walk the line, while also trying to do what is right, while also trying to balance her new feelings, it’s so good. So damn good! This is such a powerful little book that I loved reading from the very first to the very last page.

Emily Skrutskie has woven such an amazing story here. This was a complete joy to read. And I truly believe with my whole heart that this is one of the most underhyped books of all time. And I also believe that this is going to be the best book I’ll read all of 2018’s Pride! Friends, buy this, read this, love this, and come gush with me. Please, I’m begging you.

Buddy read with May at Forever and Everly! ❤

36 thoughts on “The Abyss Surrounds Us by Emily Skrutskie”