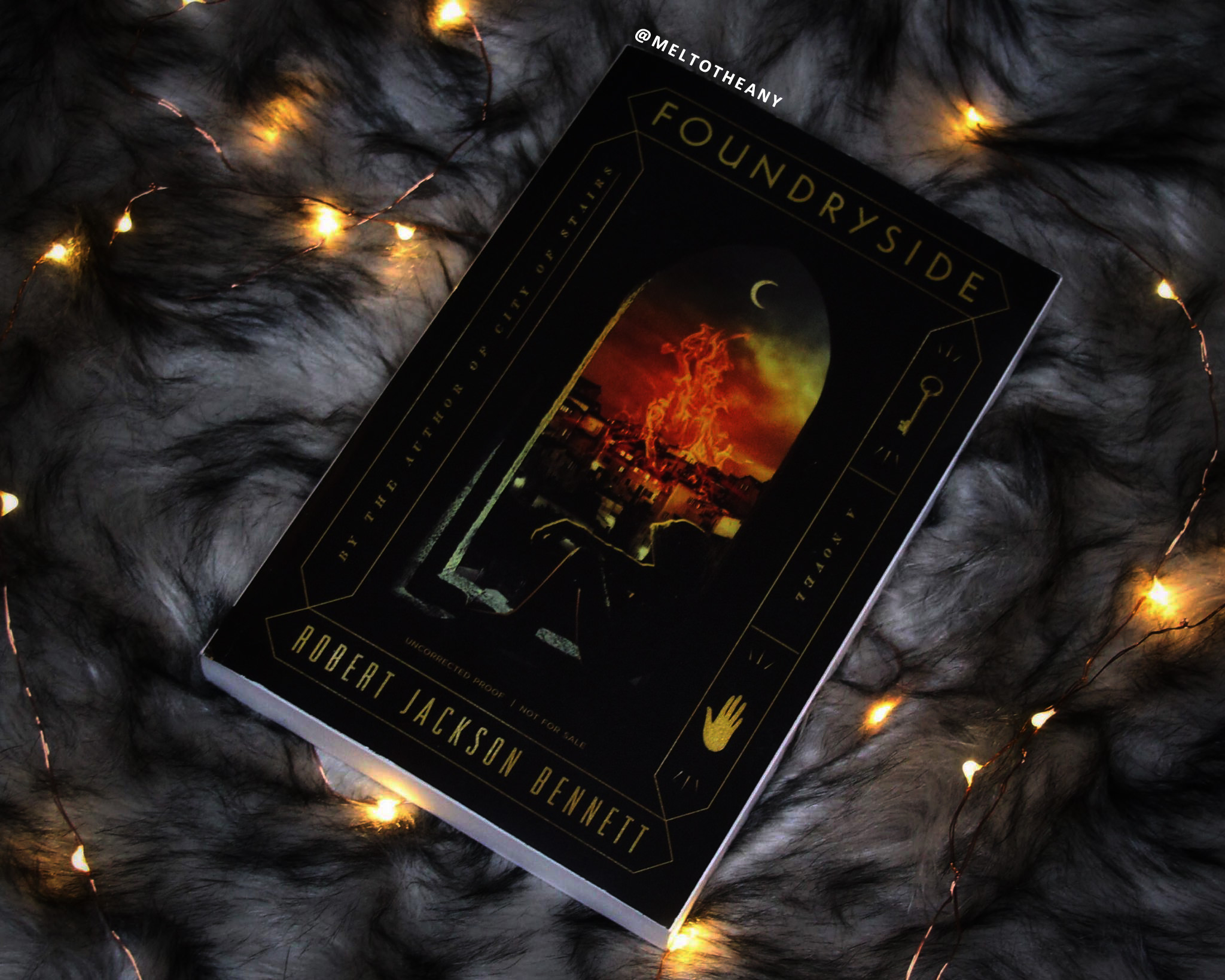 ARC provided by Crown in exchange for an honest review.

“Foundryside. The closest thing Sancia had to a home.”

This is a really hard book for me to rate. The concepts in this book are so unique and creative; I loved them so very much! But some of the banter and conversations felt so dry, boring, and sometimes even offensive. Like, two of the main characters have completely captured my whole heart! The others? Meh. I do think this is worth it though, especially if you have enjoyed Robert Jackson Bennett’s other works! I just expected more, especially after the 6/5 star beginning of this book!

In this world, four houses rule Tevanne. While those royals live like kings, the rest of the population lives in Foundryside, where crime is in high quantity and food and clean water are in low supply. And people are willing to do anything to survive.

“Four walled-off little city-states, all crammed into Tevanne, all wildly different regions with their own schools, their own living quarters, their own marketplaces, their own cultures. These merchant house enclaves—the campos—took up about 80 percent of Tevanne.”

And Sancia Grado is one of the best thieves in Foundryside. Not only is she trained, but she also is harboring a secret that enhances everything that she is able to do, while also giving her abilities that no one else has. And this book starts out with her doing a mission for a payout that will completely change her life. But once she gets the item that she is heisting, her life changes more than she would have ever guessed.

“But if you didn’t work for a house, or weren’t affiliated with them—in other words, if you were poor, lame, uneducated, or just the wrong sort of person—then you lived in the remaining 20 percent of Tevanne: a wandering, crooked ribbon of streets and city squares and in-between places—the Commons.”

The magic in this book is so damn well done. There are people who are able to perform scriving, which is a magic founded in words and language, where you can convince items to do certain tasks. Think a lock that refuses to unlock for anyone without a certain type of blood. Or think of an alarm system that only goes off when certain things happen. Or even think of a belt that tricks gravity itself so the wearing would be able to scale buildings. And these artifacts are very sought after. And maybe, our little thief has just found one that will completely change the world.

And Sancia’s path inevitably crosses many different people, and they all start to piece together that a much bigger thing is happening than any of them realized. This book has many points of view, but, in my opinion, Sancia’s is easily the best. She is truly the star of this book, and her backstory still has me feeling every emotion under the sun. Also, Clef and Sancia are everything and I’d probably die for either of them.

But like I touched upon before, this book makes some fatphobic comments. It’s so thoughtlessly done, too, that it makes me sad, because a beta reader should have noticed and corrected. The first “villain” you encounter in this story of course had to be fat, and it had to be touched upon a couple times. Then, when one of the main characters is looking at a baby picture, a freakin’ baby picture, its talked about again in a bad light. Basically, everyone and thing who is bad has to be fat. I felt like I was reading a Roald Dahl book! Like, I think at the 33% mark I had highlighted five fatphobic things, and it really made me want to DNF this book, I’ll be honest. And I hated every Gregor point of view after. But let me pull some quotes, because I guarantee someone will try to call me out on this:

“He could tell which one of them was Antonin right away, because the man’s clothes were clean, his skin unblemished, his thin hair combed neatly back, and he was hugely, hugely fat—a rarity in the Commons.”

“Gregor took stock of the situation. The taverna was now mostly empty except for the moaning guards—and the large, fat man trying to hide behind a chair.”

“Tevanne, a huge dome that reminded her of a fat, swollen tick, sitting in the center of the Candiano campo.”

“Gregor stared at the painting—especially at the woman in the chair, and the fat infant. His gaze lingered on the baby. That is how she still thinks of me, he thought. Despite all my deeds and scars and accomplishments, I am still a fat, gurgling infant to her, bouncing in her lap.”

“She was not like Torino Morsini, head of Morsini House, who was hugely fat and often hugely drunk, and usually spent his time trying to stuff his aged candle into every nubile girl on his campo.”

Like, it’s 2018. How the hell did proofreaders think those sentences were okay?

Trigger and content warnings for fatphobic comments, abandonment, torture, abuse, murder, death, sexual assault (unwanted touching), child trafficking, use of the slur word for Romani people, loss of a loved one, slavery, medical experimentation, and a lot of depictions of blood.

Overall, there was a lot about this that I enjoyed and a lot that I didn’t enjoy. I feel really torn on this one. I feel like it’s so hard to find unique concepts in adult fantasy anymore, and this book reads like a breath of fresh air. I truly did adore this smart magic system. But I could just never totally fall in love with this story! Yet, I am still curious enough to continue on! And I hope if you pick this one up, you’ll be able to get more enjoyment from it than I did. Also, everyone else I know has five starred this, so take my review with a grain of salt! Happy reading, friends!

Buddy read with Jules at JA Ironside & Michael at Bitten by a radioactive book! ❤