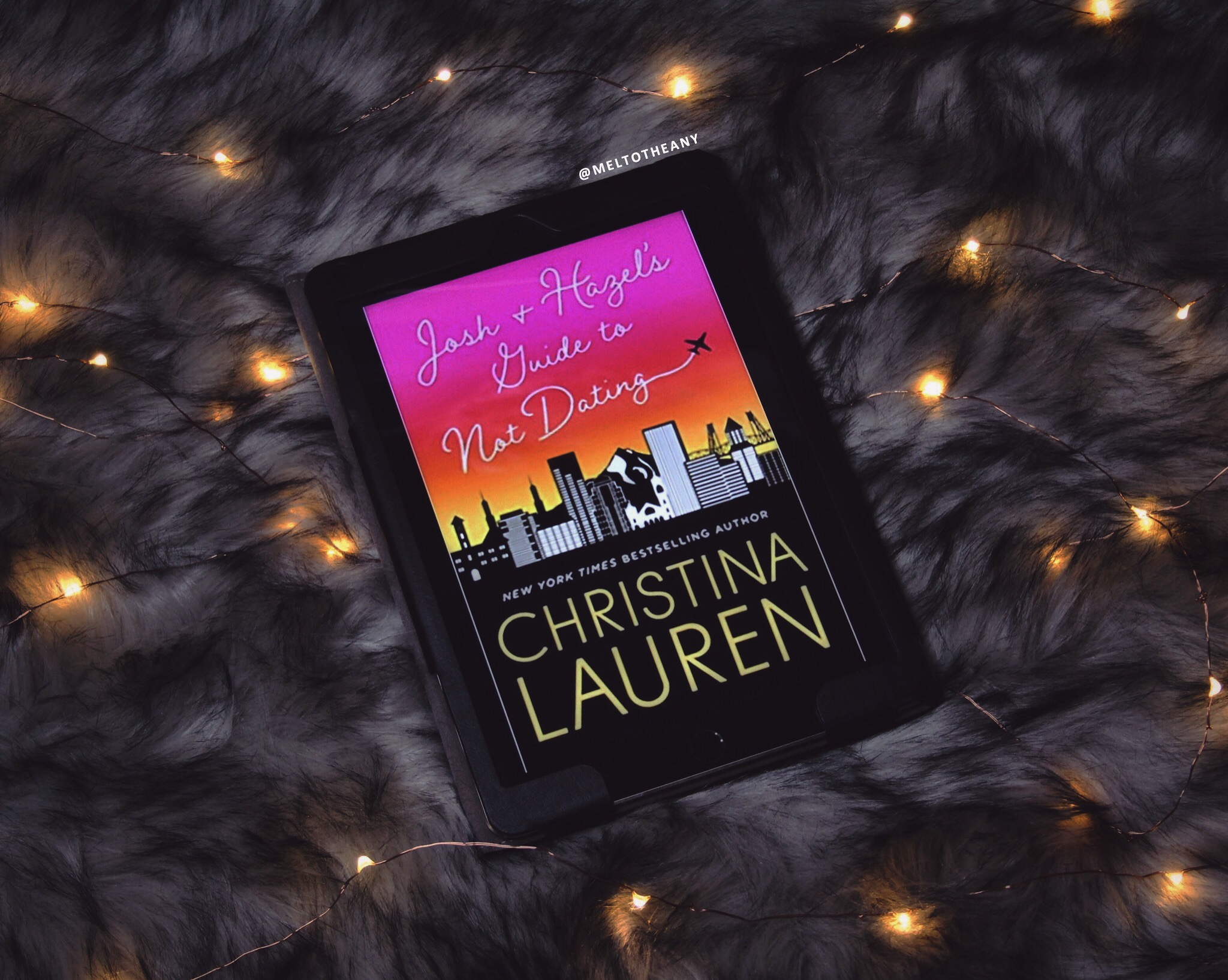 “The world seems full of men who are initially infatuated by our eccentricities, but who ultimately expect them to be temporary.”

Most of you know that I’m a pretty big fan of Christina Lauren! Autoboyography is now one of my favorite books of all-time. And friends, I really enjoyed this book and it made me so unreasonably happy! Josh and Hazel’s Guide to Not Dating is set in Oregon and is honestly one of the cutest friends to lovers stories I’ve read in such a long while. I honestly never wanted this book to be over.

➽ Hazel – Teacher, the quirkiest character I’ve ever read, but I mean that in a good way, and has finally reunited with a guy who she has embarrassed herself around for the past almost decade.

➽ Josh/Jimin – Doctor, Korean (Yeah, named Jimin, smart marketing because BTS Armies are going to love him with their whole heart), and currently in a long distance relationship that isn’t working.

And these two’s paths have constantly crossed since college, but fate has truly brought them together when Hazel attends her best friend’s BBQ, only to realize that Josh is the guy who she has embarrassed herself around since college. But after that BBQ, they decided to be friends and it leads to them going on a lot of double dates, which are all mostly bad.

There is a constant theme of family in this book, both from Hazel and Josh’s side, and I loved it so much. Hazel’s relationship with her mother was so inspiring, and I loved how they loved each other unconditionally. Josh is from a much more traditional background, but the love is so there and so very abundant. Seriously, both of these families warmed my damn heart and it was easily one of my favorite parts of this book.

I also really loved how Hazel wouldn’t change herself for anyone. And I think this book does a really good job at showing you how most people are pretty negative about anyone being too loud, too weird, and too different than the standards society puts on us. This isn’t like the typical “oh, the girl is quirky and cute” but this is the more realistic and sad treatment of people who live their life to the beat of their own drum. And seeing Hazel (and Josh) always speak up if anyone was negative or judgmental, was really beautiful. Because, like, who the hell wants to be normal anyways?

“I have chaos around me, but it’s like he doesn’t even care. He doesn’t need me to change or pretend to be someone else. He’s my person. He’s my best friend.”

This book was actually funny, too! Like, I was giggling alone in bed while reading at least a third of this book. Hazel is one of the most fun protagonists I’ve read about, and she and her animals had me laughing constantly. And all the dates? So freakin’ funny! I honestly could perfectly picture this book, and I actually think it would make for a fantastic romcom movie adaptation.

But this book does have a lot of steamy scenes, so trigger and content warnings for sexual content, talk of past death of a loved one, cheating (off-screen and not main characters), and a homophobic slur.

And out of all these trigger warnings, I want to talk more about the homophobic slur, because it was so damn pointless. I mean, it was said in a negative light, but it wasn’t necessarily challenged. Like, it felt so bad to read and took me completely out of the story. These authors could have just as easily said “he said a rude thing” or hell, even “he said a homophobic slur” without actually using the word. Like, I hated it so much and it was easily the worst part of this book.

The only other negative thing I’ll say is that the ending felt rushed. Like, we spend so much time watching these two people become friends, and the romance and love has to come rather quickly. Which I get, and I don’t mind that much, but I was still shocked with how the last few chapters went and then I got hit with the word “epilogue” and it felt so abrupt. Also, this book is 95% light, cute, and heartwarming, and then it just takes a really dark turn during the last tiny bit, and it just felt very disjointed.

“You’re second only to a unicorn as far as best friends go, Josh Im.”

But overall, I really did enjoy this sweet friends to lovers story. I think this is for sure a perfect summertime read. Oh, and even though it has a cover that looks very much like Roomies, these worlds and stories are not connected what so ever. So, don’t be scared or think you have to read Roomies first! But I totally recommend this one, and I hope if you pick this one up, that you’ll enjoy it so very much, too! Happy reading!

I’m reading this for #smutathon, which is being hosted by Lainey and Riley! ❤

And this is a buddy read with Lilly at Lair of books!