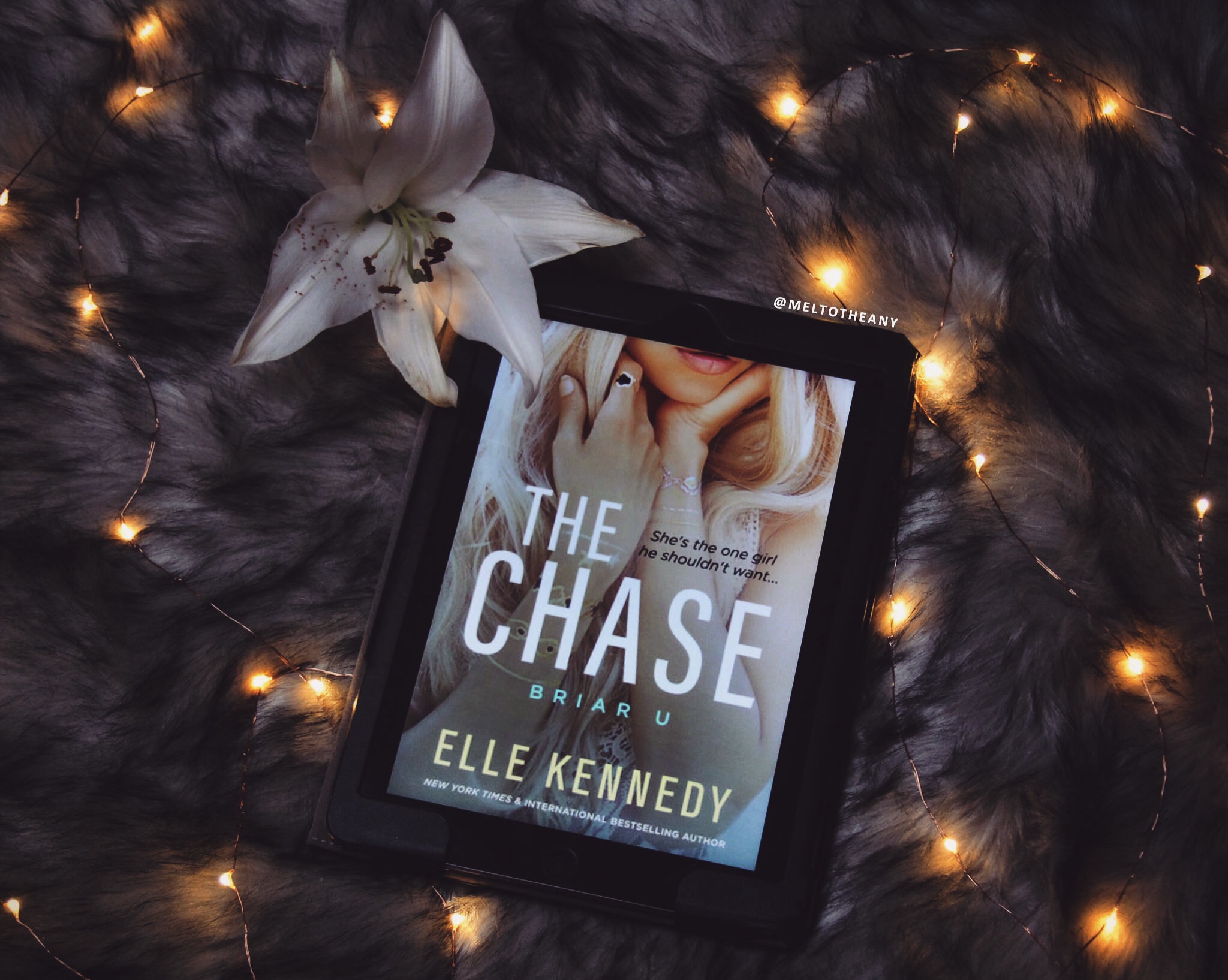 “I feel like too many girls fail to remember one vital truth: we deserve someone who gives us one hundred percent. Half-assed effort isn’t effort. Half-assed love isn’t love.”

Elle Kennedy and her steamy hockey romances are back. And, like, what a damn blessing. This is the happiest I’ve been reading a book all damn year. These new characters completely won me over. All the cameos from the people we already love were perfection. The banter and jokes literally had my sides hurting from giggling. And, this book actually had some really important topics like ADHD and how learning disabilities can impact you in college, how growing up in the middle of abusive parents can have detrimental effects, how judging people based off their looks is really gross, and how you should always go with your gut feeling, especially when it comes to creepy men in a position of power.

You all, I loved this. The ARC hit my kindle at about 8 PM last night, and I quickly ate dinner and spent the rest of my night completely immersed in this college that I missed so much! And like I said above, we get to see Garret, Logan, Tucker, and Dean, but this is a whole new hockey team, even if a couple of the guys have had minor parts in the original quartet. And The Chase really focuses on:

➽ Colin Fitzgerald – Tatted, video game loving, hockey player. Like, the dream, right? But Fitz is struggling with abuse from his past, and never allowing anyone in. That is, until he meets a girl who he wishes, more than anything, he didn’t want to let in so badly.

“In college, I’ve made more of an effort to be social, but deep down I’m still the guy who wants to remain invisible. Summer is the most visible person I’ve ever met.”

➽ Summer Di Laurentis – Dean’s littler sister has just transferred to Briarwood! She’s pursuing a degree in fashion, but she unapologetically loves it (and herself), regardless of the judgement people want to throw her way. The only problem is, she doesn’t have a place to live since she transferred schools so quickly. But Dean talks to Fitzy, Hollis and Hunter, since they are living in his old house, which totally has room for his baby sister.

And all that good angst ensues.
*clutches pearls forever*
The sexual tension. Lord, help me.

“…He just happens to be THE UNICORN. The tall, sexy, tattooed, hockey-playing unicorn of a man who I might have a teeny-weeny itsy-bitsy crush on. Okay, fine. A big motherfucking crush on.”

But we also get to see a lot of Hunter, which is deserving of a whole other paragraph. Okay, here is the thing about this book; I loved it with my entire heart and soul, and I don’t even have a word combination for how happy it made me while reading, but, if I was Summer, I would have wanted to date Hunter over Fitz. There I said it. I’m terrible. But it’s the truth. It’s honestly the only “negative” thing I can say about this book, and I loved it so much that it’s not really a negative.

The other character that we are newly introduced to is the hockey coach’s daughter, Brenna! And like… Hi, my name is Melanie and I really want to date Brenna. Like, in the bar, with her black bralette? I was swooning, friends. I was like, “there are hockey boys at this table, too?” She deserves the entire world, and I support her (probable) traitorous ways!

Summer was easily my favorite in this book though. Gosh, I feel like 2018 is just the year of me writing too many personal reviews, but Summer just really resonated with me. I know others won’t feel this way, but Summer really meant a lot to me. I’ve been judged because of the way I look forever, and people always form these terrible, awful, superficial, opinions of me, especially at bars and parties. And I get it, people are like, “wow, you have it so rough being (with some people thinking that you’re) pretty” but like, people can be really horrible and nasty. Also, I’m loud, and outgoing, and passionate, just like Summer. And people judge her for that, too, but seeing how she handles it, very realistically, warmed my heart. Seriously, Summer is easily one of my favorite characters of 2018.

“You know who else was viewed as a fluffy sorority girl?” she challenges. “Elle Woods. And you know what she did? She went to law school and showed everyone how smart she was, and then she became a lawyer and everybody loved her, and her slimy ex tried to win her back and she sent him on his way. The end.”

This book also tackles rape culture, especially in colleges, where it is easier to tell the girl she over reacting, than to break the cycle of the abuser. Also, obviously because Summer is comfortable with her sexuality, she was asking for it. And Elle Kennedy always delivers these points in a negative light, showcasing how gross our world can be and how hurtful stereotypes are. And having this be in a book set in college? It’s even more important.

Summer’s ADHD and learning disabilities are also always at the forefront of this story, and I was living for it. Seeing Summer being insecure and embarrassed about needed more help, time, and attention, is something so important and I wish more people could read this book for that alone, honestly. Everyone learns differently, and medication doesn’t always impact lives for the better, and Summer’s voice is so dang important. I just love her and everything about her character. Seriously.

“Loving yourself is hard enough. Silencing the inner critic borders on impossible.”

Yet, this book is light, and fun, and I honestly never laugh at books, but I always get tears in my eyes from laughing at this series. I just feel like the banter is written expertly, and so realistically. And this book is really sexy. Like, there isn’t a ton of sexual content, if I’m being honest, but the build up is perfection. And the few scenes that it does have? Pretty damn hot, I’m not going to lie.

“With any other guy, I’d probably take the bull by the proverbial horns. As in, put my literal hand on his literal penis.”

Oh, and another thing I want to praise this author for was the use of video games and nerd culture in general. I always get apprehensive that I’m going to dislike books that have this element, because they never feel “Authentic” or whatever, but Elle Kennedy did such a damn good job. Even with Twitch and streaming! And oh my gosh, Fitz has a popular MMORPG friend who has a stream, and his name was Morris, and maybe it was just a coincidence, but it makes me feel like Elle knows who Sodapoppin is! And it brought me so much unreasonable joy! But she also talks about the toxic masculinity in the community and how some dudes will think girls like Summer are “faking it” or “not nerdy enough” and all the other gross accusations stereotypes. Seriously, this book is so well done. Also, I’d totally play Fitzy’s game in a heartbeat.

Overall, I just love this series. It’s seriously a tier above anything else out in the NA Romance genre. Seriously, Elle Kennedy is truly the queen of the genre at this point! And The Chase is my favorite thing she’s ever written. I can’t wait to read The Risk next year. Especially because Elle has so many things brewing, I can’t wait to see Brenna and (hopefully) a certain rival and I need to personally get to know. Thanks.

Trigger and content warnings for sexual content, use of the term “spirit animal” (in 2018, really?), drug use, attempted sexual assault, a weird comment about audiobooks that had me side-eyeing, girls on girl hate (always challenged though), a lot of gross and judgmental comments, a little body shaming towards men in bathing suits and what “looks good” or whatever, a lot of rape culture comments (again, always challenged), and shitty parents.