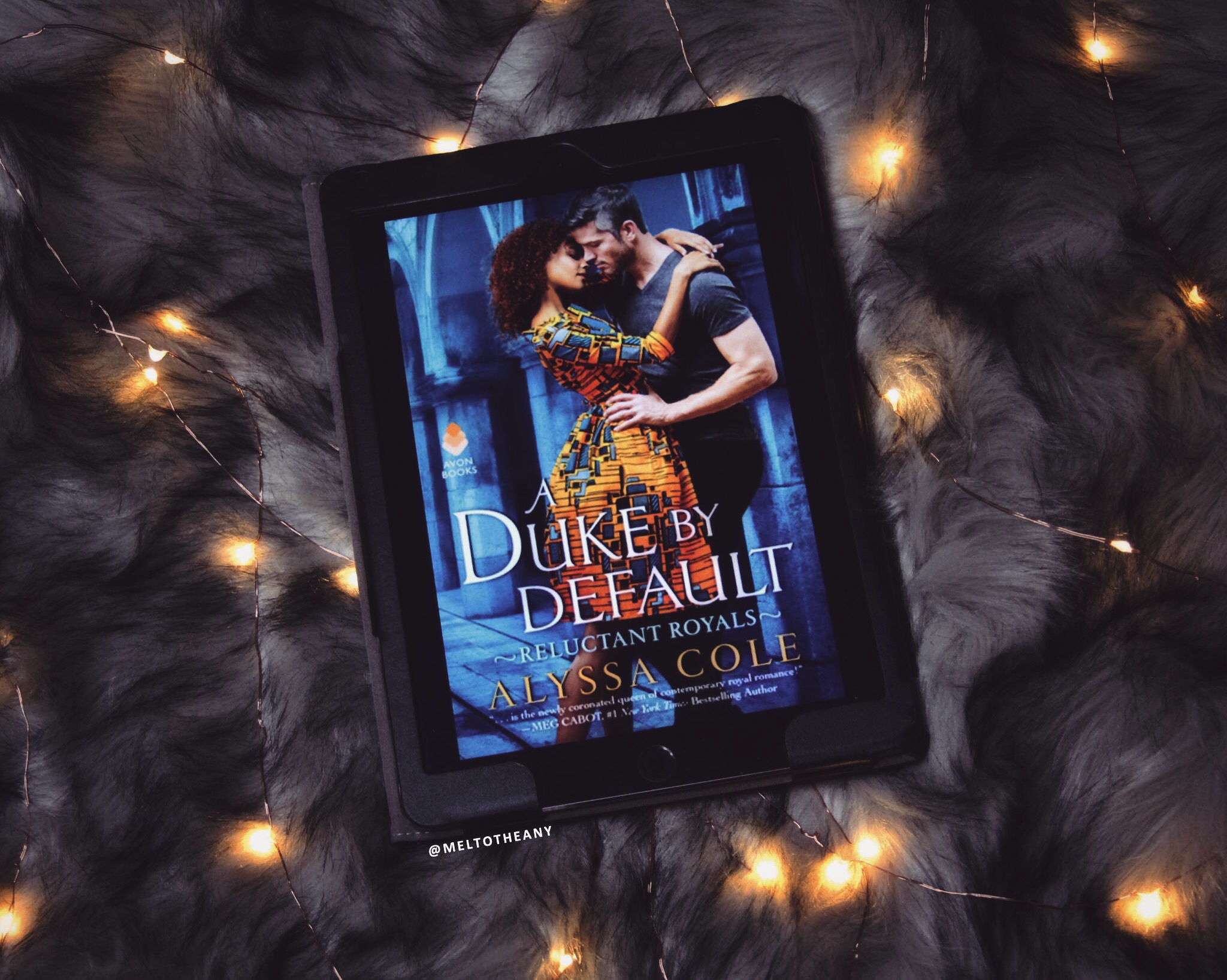 ARC provided to me by the publicist in exchange for an honest review.

“We have a fantastic romance section,” she said. “Do you need recommendations? How do you like your dukes? Grumpy? Tortured? Alpha, beta, or alpha in the streets, beta in the sheets?” “Actually, I meant nonfiction”

Friends, this was nothing short of pure joy to read. Please, if you’re looking for a heartwarming, funny, and expertly crafted romance, please look no further. A Duke by Default follows the main character in A Princess in Theory, Ledi’s, best friend Portia! But this time, Portia is on a journey to change her life and be a different person, and what better way than with a change of scenery and career? And maybe she will cross paths with someone who is much more than meets the eye himself.

➽ Portia Hobbs – Black American woman, who is ready to risk it all, move across the world, and try her luck at being an apprentice for a swordsmith in Scotland, because she is in her late twenties and still hasn’t found the career that is right for her.

“Everyone acts like you’re just supposed to find what you love right away, and if you don’t, just do something you don’t love. And if you do neither of those things you’re being selfish.”

➽ Tavish McKenzie – Biracial (Chilean and Scottish) man, who was left Bodotria Armory and is currently running it with his brother and sister-in-law, even though its becoming harder and harder for him to turn a profit, but hopefully a new apprentice can turn things around.

“Pull out your sword,” she commanded and Tav was certain it was the sexiest thing a woman had ever uttered to him.”

And spoiler, she does. Portia and Tavish’s chemistry is out of this world. These two characters feel so real, and seeing them start out a little rocky, but slowly become friends, and maybe something more, was so beautiful.

But the entire cast of side characters are honestly magnificent as well. Like, I truly am going to say a prayer every single night that Alyssa Cole never stops writing, and that she never stops blessing us with more characters from this world. Seriously, I love them all with my entire being.

➽ Reggie – Portia’s twin sister, famous blogger, brain virus survivor, uses a wheelchair, and is my hero. Seriously, I’m ready for her book with her and her mystery man immediately. Please.

➽ Jamie – Jamaican, Tavish’s brother, and Cheryl’s partner! Also, the most lovable character in this book, seriously. I want him and Cheryl’s background story so badly!

Throughout Portia’s trip she slowly is coming to terms with her having ADHD. ADHD is something that is very personal to me, and the spectrum is actually very large; from hyperactivity (me) to inattention, and everything else in-between. I struggled with putting all my time and energy into something to just stop caring about it shortly after, running in unhealthy and huge amounts, fidgeting constantly, and just feeling restless in general for most of my life, until I realized that maybe my actions weren’t as “normal” as I was lead to believe. Attention-deficit/hyperactivity disorder, along with most mental illness, is still hella stigmatized, but seeing Portia slowing coming to the realization that nothing is wrong her, that she was just a little different, that she’s the furthest thing from a failure, and her realizing her self-worth was an honor to read and brought me to tears so many times. Also, this is the third book in a row I’ve read with a main character living their best lives with ADHD, and damn, what a blessing.

“Something in her loosened with relief as the possible diagnosis repeated itself in a loop in her brain. ADHD! ADHD! ADHD! She had a word to use for her behavioral patterns. There were other people who felt the same way she did, maybe.”

We also get to see Portia dealing with the abusive things her parents say, while completely ignoring how their passive-aggressive jabs could hurt their daughter. From comparing her to her sister, to saying horrible things about how they wish the outcome of her sister’s medical emergency should have happened to her, to them just not caring about how Portia wishes to live her life and find something that makes her happy. And not to get too personal, but again, super relatable to me and my life.

“Just because your parents don’t appreciate what you do doesn’t mean it holds less value.”

This book also shines a heavy and bright spotlight on the refugee crisis going on today in Europe. America isn’t the only place that treats immigrants unfairly, and this book really shows how strongly fear tactics can work. People do horrible things in the name of a “border” and this book shows how children will mimic the terrible things their parents say. Oh, and how white people will say terrible things and make terrible jokes to people who they think are white, too. “It’s just a joke, brah!” No, you’re just racist.

Tavish and his loved ones always channel everything back positively and give back to the community and the kids who feel lost and helpless. This book also weighs in on Gentrification and how people will come in and buy a ton of low-income business and residences and then make them a profit while completely forcing the residence to seek other places to live their lives. Seriously, these books pack such a powerful punch.

“Here’s the thing with teasing. It might seem like torture now, sitting there wanting what you can’t have, but when you finally get it? It’ll be the best you’ve ever had.”

But even though this book has important issues, the romance is steamy perfection. Like, the sexual tension in this book starts right out of the gate, and it has the most rewarding payoff. And, I mean, this is a damn story about a girl falling in love with a damn swordsmith! Not only have I never read anything like that before, I’m not sure if I’ve even heard of a sexier premise. Also, this book has Portia and Tavish going to a renfest! Like, one of the saddest parts of me moving across the country is not being able to go to Michigan’s Renaissance Festival! I was living for every scene in this book, seriously.

Plus, this book is downright funny. I never laugh out loud from books, ever. This book and A Princess in Theory left my sides hurting. The banter in this book is perfection. And just in general, Portia and her friends are goals. Complete and utter goals. From unconditional love, to the best and most realistic banter.

Ledi: Same thing I do every night: studying viruses and trying to stop them from taking over the world.

Nya: Playing a dating sim to make up for the real date I had earlier. Rognath the Vampire Lord is much better at courtship than Luke, who started the night by calling me Sexual Chocolate and went downhill from there.”

Overall, I loved this story so much. The writing is superb, the characters are to die for, and the messages mean more to me than I have words for. I completely recommend this series with my entire heart and soul. And I am so hyped to read all about Johan and my favorite texter in A Prince on Paper! And thank you so much, Alyssa Cole, for this story that I will keep close to my heart forever.

Trigger and content warnings for hurtful parents and their hurtful comments (who think they aren’t being hurtful), people being ignorant and gross to immigrants (always in a negative light and challenged completely), talk of past racist racial profiling from the police, a quick scene with assault, and for a human drugging another human.

11 thoughts on “A Duke by Default (Reluctant Royals, #2) by Alyssa Cole”