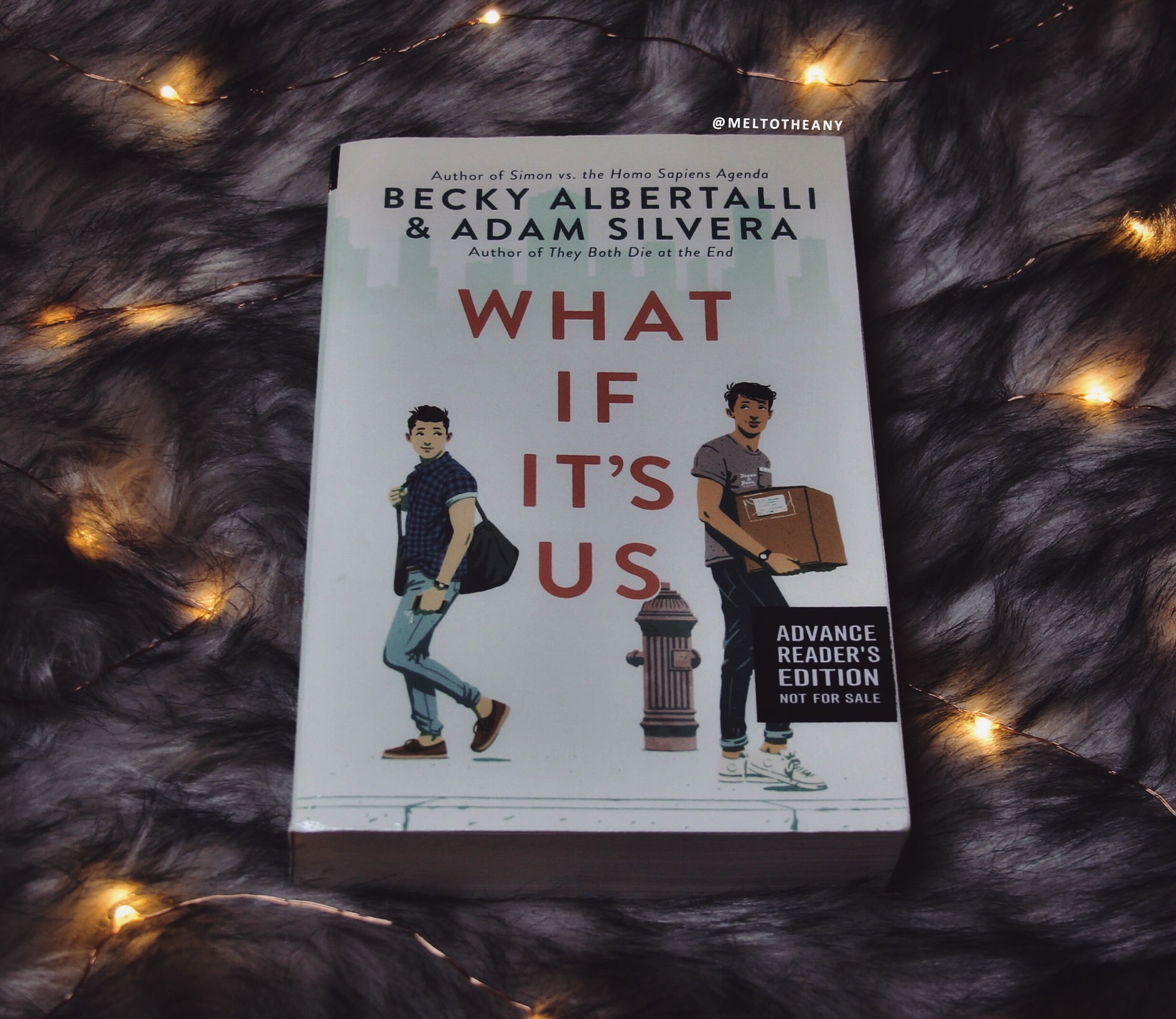 “I believe in love at first sight. Fate, the universe, all of it. But not how you’re thinking. I don’t mean it in the our souls were split and you’re my other half forever and ever sort of way. I just think you’re meant to meet some people. I think the universe nudges them into your path.”

My dear friend, Jules, dubbed this a “queer, modern day, Sleepless in Seattle, set in New York” and she was so damn correct. Friends, I loved this book. It was seamlessly and so very beautifully written. The characters felt so real, that I’m still convinced that they have to be real people, walking the streets of New York while you read this review. And the romance? Lord, this was the sweetest, but most realistic, romance I’ve read in years. Please make sure you all preorder this book before the October 2nd release date.

➽ Arthur – White, gay, 16 (but a 17th birthday does happen), and just visiting New York for the summer, because he was able to land a very good intern position.

➽ Ben – Puerto Rican, gay, 17, and trying to mend his broken heart, because he and his ex just broke up, and now he is forced to see him every single day in summer school.

And these two boys met by chance, in a post office one July day, and it changes their lives. Yet, the constant question of this book is if that meeting, given to them by the universe or some higher-power, was meant to bring them together or to keep them apart.

“I guess that’s any relationship. You start with nothing and maybe end with everything.”

I very much related to Ben, who is constantly self-conscious about his white-passing looks. That is, until he and his privilege get completely checked. This was such a minor side story in this book, but it meant the freakin’ world to me. Both, him feeling not as much in touch with his culture when he is away from his family, and when he realizes that a lot of privilege comes from being white-passing.

“Not looking the part of Puerto Rican messed me up. I know I get some privilege points from looking white, but Puerto Ricans don’t come in one shade.”

Also, this book wonderfully touches upon how Arthur has ADHD, and how he lives a better life because of Adderall (which I know isn’t for everyone, but it still made me really happy to see). He and his family are also Jewish, and that is always as at the forefront of this story, too. And it is beautifully mingled with Ben’s very catholic family.

“We’re not old-school Catholics who live by the Bible and conveniently ignore all the verses that contradict the hate coming out of their mouths. We’re the kind of Catholics who think people shouldn’t go to hell for being nonhetero, and that was before I even came out.”

This is just such a beautiful story about these two boys coming together, by fate, while trying to discover who they are and who they want to be. Life, and the world we live in, is such a vast thing, and seeing these teenage boys try to understand it with each other, knowing they only have a summer together, is something so awe-inspiring that I don’t even have words for it.

Other important juxtapositions are in this book, too. Like, Ben’s family isn’t the most wealthy, but they get by, where Arthur’s parents are able to spend the entire summer in New York. Arthur also has plans of going to a very good school, where Ben is just trying to stay afloat in high school. But Ben’s parents are very much in love and happy, where Arthur’s parents just have a different way of showing each other love. Seriously, this book has so much good in its’ four-hundred pages!

Plus, this book displays some beautiful friendships, too. Ben’s best friend, Dylan, was so amazing in this book. Like, I feel like I keep saying the world “realistic” but it’s honestly the perfect fit. And Dylan lives with extreme anxiety and a heart condition. I also was living for Arthur’s best friends, Jess and Ethan, and all their facetime calls. I ended up loving this entire friend group! And, of course, I ended up completely head over heels for both Ben and Arthur.

“How lucky we are to be alive right now, right?” “Oh my god, you’re speaking Hamilton—I’m just so into you. I’m helpless.”

Overall, I loved this book entirely. I bet it makes my “best of 2018” list, come December 31st. Also, I can’t believe this book was written by two different authors, because it was seriously seamless perfection. This was one of the best and most realistic romances I’ve ever had the pleasure of reading. And even though I didn’t entirely love the epilogue at first, now I actually think it’s one of the best epilogues I’ve ever read. The perfect amount of not enough, and enough. I mean, that’s the beauty of this book being magically and expertly crafted. Seriously, friends, please read this masterpiece; it’s so very heartwarming and I think this is the happiest I’ve been while reading a book all of 2018.

Trigger and content warnings for one homophobic scene that is very quickly done and completely challenged (Chapter 20) and a very serious panic attack.