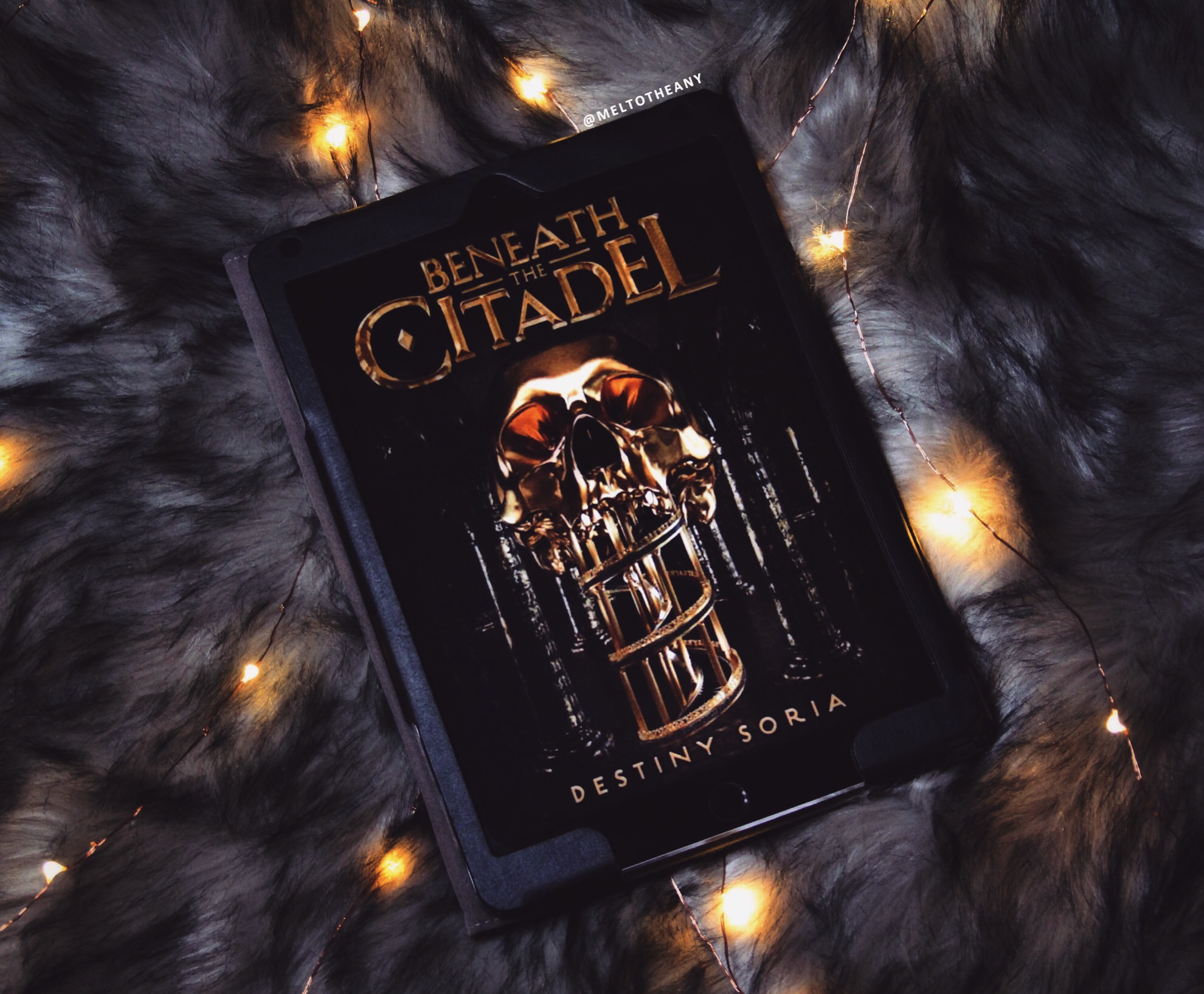 “Deep beneath the citadel, the executioner was waiting.”

Beneath the Citadel really impressed me throughout. Not only is this a really solid and satisfying standalone, and not only does it have some pretty amazing rep, but the story is also so unique. Every time I opened this book up, I never wanted to put it down.

The book starts out with four of our main characters being thrown into the dungeons, after being sentenced to death. Yet, this was completely their intention. From the opening scene, throughout the rest of the book, these group of five ragtag teens come together to try to pull off a quest that will completely change everything they’ve ever known.

➽ Cassa – PoC, and the leader whose parents left behind a huge rebellion legacy for her to try to live up to. Cassa is brave, and strong, and willing to do anything to erase the pain she feels inside, while also attempting to make the world a better place.

➽ Vesper – Cassa’s old best friend, who has betrayed them and who is put in a dangerous predicament because of her past with Cassa. I don’t want to say much else, but Vesper is a really cool character, who I loved learning more and more about.

➽ Alys – Plus sized, PoC, ace spectrum, has severe anxiety, and the genius of the group! Alys also is a bit if a prophetess, even though it has lead her astray in the past. Also, her parents are apothecary rebels.

➽ Evander – Bisexual, PoC, the charmer of the group, and is Alys’ brother! Also, he has a bit of magical power with manipulating silver that he received for a cost.

➽ Newt – Gay, a contortionist, and the sneaky rogue-like one of the group! Also, living with past trauma of an abusive parent. (And probably my favorite of the entire group!)

“He learned how to hold a world of hatred inside of him without a single crack in his exterior calm. Sometimes he felt like that was his greatest accomplishment. And sometimes he wished the Valeras hadn’t done him the favor of letting his father live.”

But beneath the citadel, something else lurks deep below. Cassa and her friends are offered two bargains, both of which they are unsure of taking. But time is ticking, and they have to make a choice; to help what everyone thinks is a monster down below, or to help what Cassa knows is a true monster above. And this story is told in the span of five days, so decisions happen rather quickly.

Yet, I do think that this is a book about friendship, found family, and how important it is to surround yourself with people who will accept you and unconditionally love you. These five teens have all been dealt very different hands in life, but they’ve all come together and truly try to make this world a better place. I honestly loved this entire cast.

“I’ll tell you the story,” he said. “I can’t promise you’ll believe me, but I promise it’s all true.”

I’ll be honest, this book reminded me a bit of Six of Crows and Senlin Ascends, which I’m not sure there is a more desirable combination on this planet. The characters all won me over so quickly. The story had me constantly questioning, while unable to put the book down, because I had to find out what the truth was. And this book had some pretty amazing (and heartbreaking) twists and turns along the way.

Overall, I really enjoyed this and would completely recommend. Not only is it unique, but Destiny Soria really took the time to put in some amazing diversity and representation in this book. I personally loved the bisexual representation, and the m/m romance was so pure and completely stole my heart. And I’m so impressed with what this author was able to deliver, both character and world building wise, in a standalone. This was a wonderful ride that I hope you all pick up come October 9th!

Content and trigger warnings for loss of a loved one, torture, abuse, murder, death, captivity, medical experimentation, panic and anxiety attacks, depictions of blood, and heavy depictions of grief and trauma.

Buddy read with: Kaleena at Reader Voracious.com, May at Forever and Everly, Julianna at Paper Blots, & Jules at JA Ironside! ❤

19 thoughts on “Beneath the Citadel by Destiny Soria”