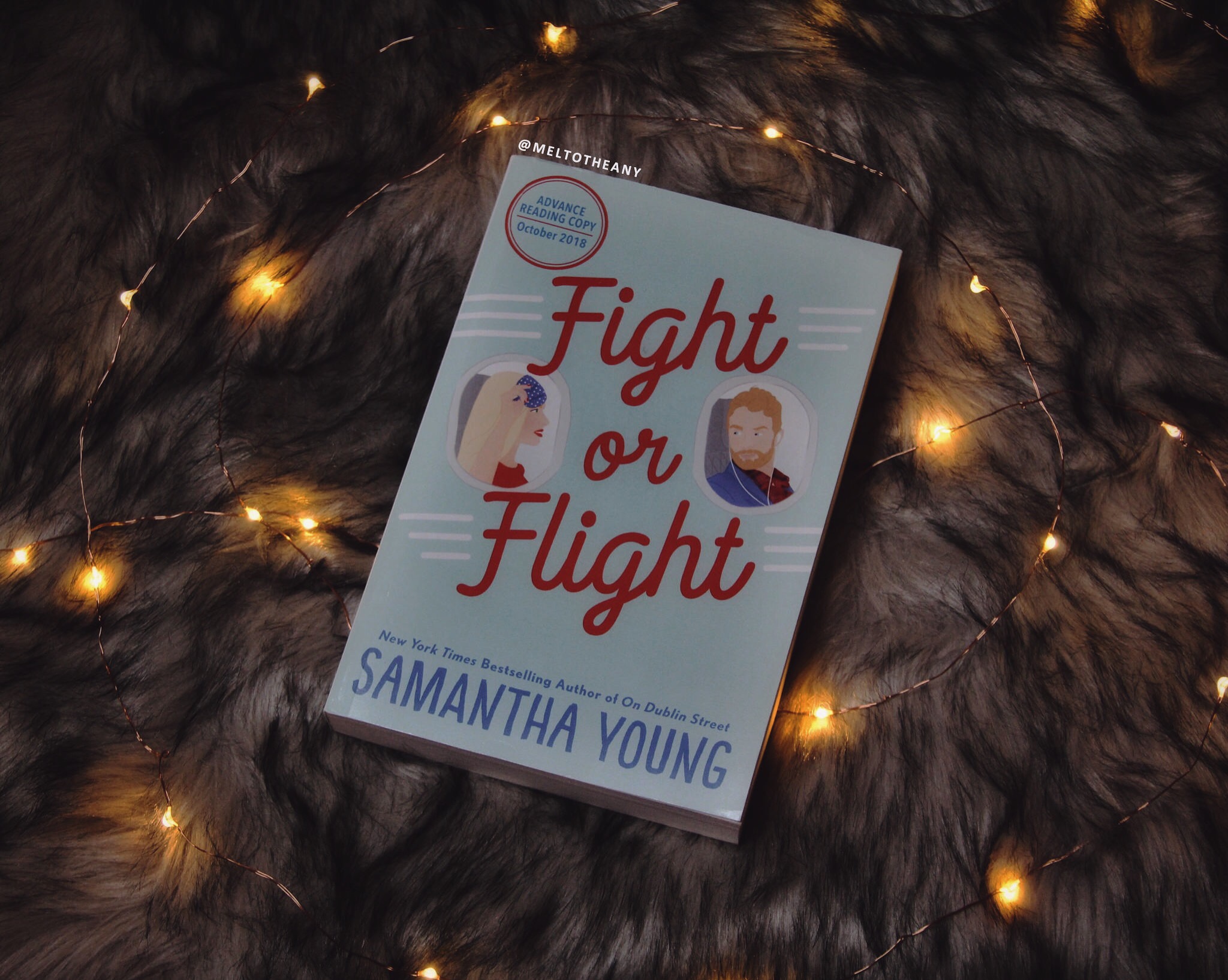 “I never believed in fate until you”

Fight or Flight is an enemies to lovers romance starring two people who met during a layover in an airport under the worst of circumstances. I’ve read a few books by Samantha Young and I’ve enjoyed every one, but this one had a few aspects that really did have me side-eyeing.

➽ Ava Breevort – Interior designer. Boston local. Grieving the loss of someone who used to mean a lot to her and is currently trying to fly back to Boston after attending a funeral.

➽ Caleb Scott – CFO for an up and coming tech company. Visiting from Scotland. And currently at the airport and realizing that he is going to be stuck in the US for longer than he anticipated.

And I said this was an enemies to lovers story, so they obviously hate each other… at first. But they soon realize that the only way for them to stop thinking about each other is to get whatever it is out of their system. But only for one night. But after that one night, they realize that it might not be enough. Yet, both of these characters have built such walls around their hearts because of things that happened to them in their pasts. Plus, Caleb is stuck in Boston for a little longer. And he gets to see Ava for who she really is, and he gets to slowly meet the found family she has created for herself. This is really a story about fate and how sometimes unexpected things can really completely change the outcome of lives; for the better and for the worse.

“You win when you realize that anyone can hurt you, even those you never expect it from. Once you know that … you’ll never be knocked off your feet long enough to lose.”

This book was completely addicting, and I never wanted to put it down. Ever. No matter how infuriated I got at some of the things Caleb did and some of his gross actions. But I couldn’t write this review without talking about some of the gross things he did in this book. First off, during a sex scene, Ava realizes that he doesn’t have a condom on, and after asking him to go put one on, he kind of hesitates and goes for another stroke and…. *throws up forever* I can’t, friends, I really can’t. Next, he totally villainizes a woman for having an abortion. Like, there are a lot of aspects you could villainize this woman for; lying, using him, whatever really, but villainizing her for having an abortion just makes me sick to me stomach to read. Nothing, and I truly mean nothing, gives him a say in what any woman does with her body, ever. And lastly, this book is for sure an enemies to lovers storyline, but Caleb says some really horrible things to Ava about her appearance and judging her because of it. And I get it, sometimes we all have stereotypical thoughts about people at times, but Caleb turns it into “you don’t have power over me just because you look good” type of shit. And I’ve personally had dudes act like that to me before, and you know where they are? In the fucking trash where they belong. Like, no. It’s unacceptable, especially for the length that Caleb continued to judge Ava.

And I’m not going to say that Ava was my favorite protagonist of all-time or anything, but I really did love reading about her for many reasons. First off, she is successful and did it all on her own, with really shitty parental figures that didn’t do anything to help her. Next, she is just caring and reaches out to help others around her. Her and Harper’s friendship was probably my favorite aspect of the entire book. Lastly, I get that Ava is that typical blonde heroine, that’s skinny but has big boobs, but the author kind of has a unique spin on it, because Ava brings up how everything is always sexualized because of her bigger chest. And, I know this seems so small in comparison to everything else that needs representing in the world, but I used to really struggle with this growing up. My mom would always make me feel terrible, even just wearing a v-neck t-shirt. But, friends, I moved away from home and realized that was entirely her (and society’s) problem, not me or my genetics that I have no control over. Basically what I’m trying to say is that Caleb makes some questionable choices in this book, but Ava really is the shining star of it.

Content and trigger warnings for a lot of gross judgmental comments that rubbed me the completely wrong way, severe parental abuse, attempted sexual assault, physical abuse, domestic violence, cheating (in the past & not between the MCs), talk of miscarrying, talk of abortion, a brief and gross unprotected sex scene, slut shaming, loss of a loved one, and a lot of toxic masculinity.

17 thoughts on “Fight or Flight by Samantha Young”