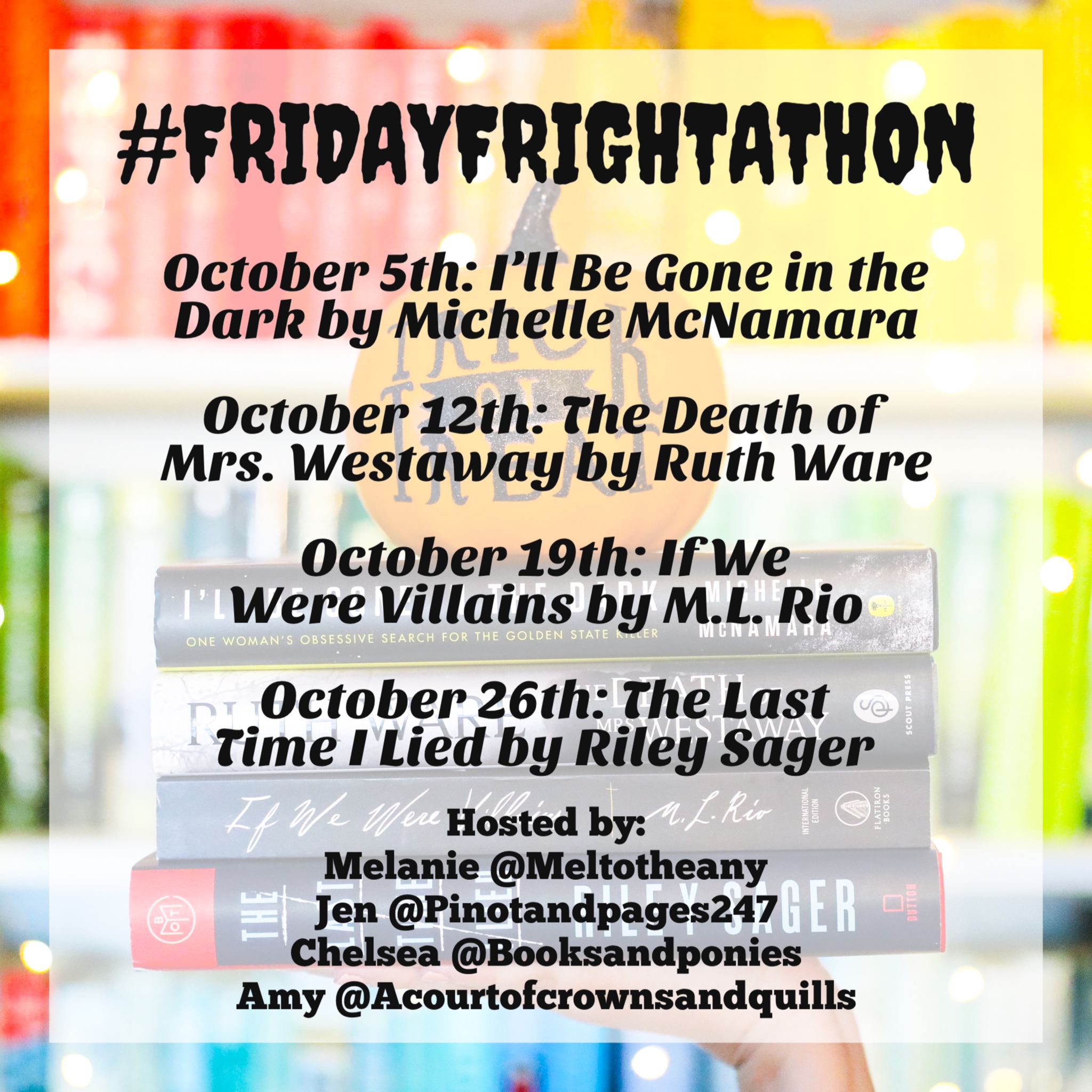 #FridayFrightAThon is a readathon that I’m hosting with a few of my very best friends this October! And basically we are just going to pick up a new thriller each Friday! We are going to be talking about all the books using the hashtag #FridayFrightAThon on Twitter and Bookstagram! I hope the books we picked end up actually being amazing, and I hope you all participate if you can! We will be so very honored if you join us! Also, make sure you check out my wonderful co-hosts who I love so much: Amy @ A Court of Crowns and Quills, Jen @ Pinot and Pages, & Chelsea @ Chelsea Palmer! 👻

“For more than ten years, a mysterious and violent predator committed fifty sexual assaults in Northern California before moving south, where he perpetrated ten sadistic murders. Then he disappeared, eluding capture by multiple police forces and some of the best detectives in the area. Three decades later, Michelle McNamara, a true crime journalist who created the popular website TrueCrimeDiary.com, was determined to find the violent psychopath she called the Golden State Killer.”

This book actually helped catch a serial killer. Like, what else do I really need to say? That’s beyond words amazing. And I’m guessing this will be a very powerful and very impactful story.

“On a day that begins like any other, Hal receives a mysterious letter bequeathing her a substantial inheritance. She realizes very quickly that the letter was sent to the wrong person—but also that the cold-reading skills she’s honed as a tarot card reader might help her claim the money.”

Ruth Ware seems to be a polarizing author, and I know so many of my friends disliked The Woman in Cabin 10, but those same friends have assured me that The Death of Mrs. Westaway is her best work yet! And I’m excited to finally read Ruth Ware for the first time!

“In this secluded world of firelight and leather-bound books, Oliver and his friends play the same roles onstage and off: hero, villain, tyrant, temptress, ingénue, extra. But in their fourth and final year, the balance of power begins to shift, good-natured rivalries turn ugly, and on opening night real violence invades the students’ world of make believe. In the morning, the fourth-years find themselves facing their very own tragedy, and their greatest acting challenge yet: convincing the police, each other, and themselves that they are innocent.”

The very first book I read this year was The Secret History, and friends, a day hasn’t gone by that I haven’t thought about that book. Everyone tells me that this is the closest book to give me those same vibes! And it’s more spooky, apparently! Shakespearean actors that are also maybe murderers? Sign me up, please.

“Two Truths and a Lie. The girls played it all the time in their tiny cabin at Camp Nightingale. Vivian, Natalie, Allison, and first-time camper Emma Davis, the youngest of the group. The games ended when Emma sleepily watched the others sneak out of the cabin in the dead of night. The last she–or anyone–saw of them was Vivian closing the cabin door behind her, hushing Emma with a finger pressed to her lips.”

This is one of the few books I get asked a lot if I’ve read or if I’m planning to read. I think Riley Sager and his debut was just very polarizing, so people would like to know where I fall with his work! So, I’ll let you know soon with his sophomore novel, friends!

Okay, friends! I hope you might be able to pick up a book (or four) with us! And I hope we are able to make your Halloween season a little scarier! You know, in the best way possible! But please use caution, because I’m sure many of these books do have very intense content and trigger warnings! Happy reading, loves! Stay spooky! 🍂