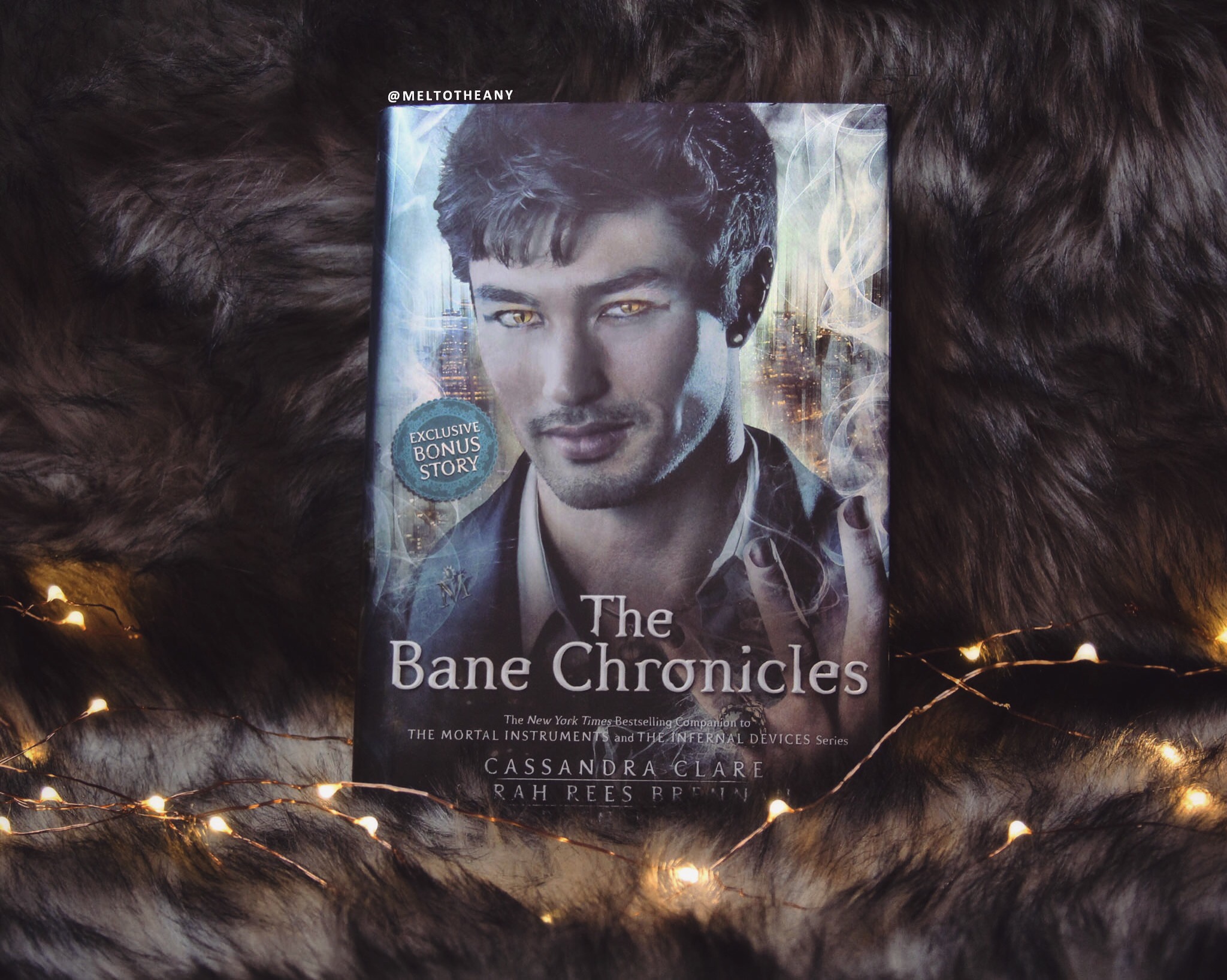 I clutched my pearls so very tightly when I found out that there was an anthology that starred Magnus, my favorite character in all of Cassie Clare’s works. Magnus is the bisexual, Asian, warlock of my dreams, and I love him with every bone in my body. I truly believe he is one of the best characters in all of literature. 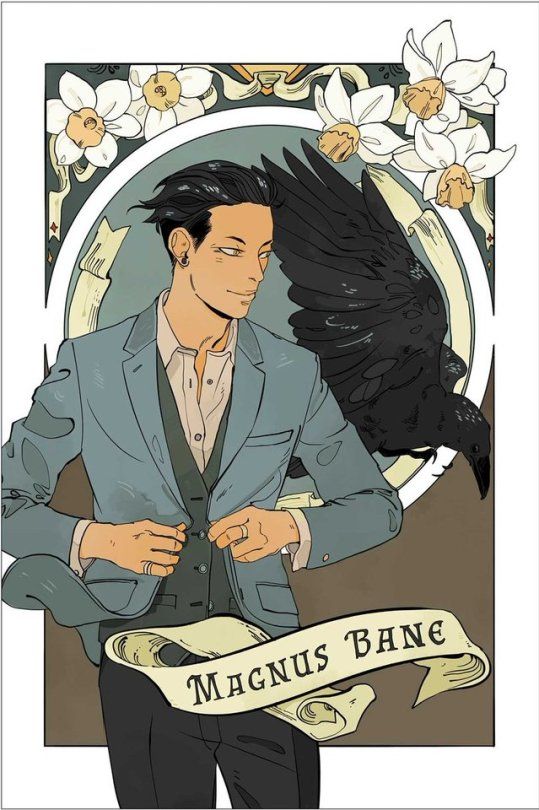 (Art from the tenth anniversary edition of City of Bones!)

I was a little apprehensive going in to this, because I didn’t realize that all of the stories were cowritten with other authors. But honestly? They blended together very well and read just like all the other Shadowhunter novels thus far. Each of these stories are about fifty pages long, but it was so much fun to dip my toes into all these different cities, years, and adventures.

The Midnight Heir was easily, hands down, without question, my favorite story in this entire collection. And I am willing to grovel, beg, plead, maybe even commit a minor felony, to be able to learn more about James and Grace. (Oh my gosh, my lovely friend Lance just told me about The Last Hours and I’m happier than I’ve ever been!) But I am going to break down each short story with my thoughts, opinions, and individual star rating!

➽ What Really Happened in Peru – ★★

“Humans did not live forever. They could only hope what they made would endure.”

This follows Magnus and many of the different years that he spent in Peru. In 1791, with Ragnor Fell, and taverns, and monkeys, and pirates! Then we get to see Magnus in 1885 with Ragnor and Catarina, where Magnus is accepting a mysterious job. Then we jump to 1890 when Magnus meets Imasu and we get to see him drinking, riding magic carpets, mentioning people from TID, and falling in love. This was my favorite year, because there is just something so pure about seeing three very different warlocks coming together to talk about their lives, their demon fathers, and the expectations that have been placed upon them just by living a life that they didn’t ask for. Lastly, we see the year 1962, where Magnus meets a person named Kitty who is also a con-artist, a thief, and someone who is looking for love and adventure. And even though these little glimpses were fun, I was still just let down that we don’t truly know why Magnus was banned from Peru.

“A count! Named Axel! A military man! With black hair and blue eyes! And in a state of distress! Oh, the universe had outdone herself.”

This short story follows Magnus in Paris during the French Revolution in 1791. And apparently Paris is the place to be if you’re a vampire (which I highkey love, actually). Magnus attends a party with Henri de Polignac, then meets Axel von Fersen and accepts a difficult mission to smuggle Marie Antoinette and her family out of the city, before the desperate people take matters into their own hands. Of course, nothing goes as planned, and Magnus somehow acquires a pet monkey that he names Ragnor, but it was still a really enjoyable story and adventure.

Holy shit, all the stars! ALL THE STARS! I loved this one so much! Not only did we get to see Will’s parents, Edmund and Linette (which broke and warmed my heart), we got to see Woolsey’s older brother, Ralf, a baby Charlotte, Benedict Lightwood (yikes), some Morgensterns, and Camille herself (who I have honestly always liked)! This story surrounds a meeting were the downworlders are trying to make a treaty with the shadowhunters; but like always, the shadowhunters are shitty to them. But seeing so many faces, and so many relatives, of people that we know and love from TID – ahhh, I just loved it so much! This was perfection, and give me all the 1857, London Institute, stories with Magnus going on adventures with these people and fighting demons. Also, this story beautifully emphasizes the power of unconditional love and how it is always worth everything.

“…For one Herondale to be saved by love, and another Herondale dammed by it.”

Oh my gosh, I loved this one so much, too! I mean, the Tessa, Will, and Jem cameos were perfection all on their own, but seeing their descendants? It still makes me feel equal parts heartbreak and love. Also, ever since finishing City of Heavenly Fire, I have been obsessed with wanting to know more about the Blackthorns! In this story, Tatiana Blackthorn has called upon Magnus to do a terrible job, but before he finds his way to her abandoned garden estate, he finds a young James Herondale and has to escort him back to the London Institute. Friends, I’m not crying over this beautiful co-parenting triad; I’m weeping the happiest of tears. I loved this story so much, and my only complaint is that I hope we get more James and Grace in the future. Also, why does every Herondale just break my heart over and over again? I honestly do not understand.

“Nothing is permanent,” Magnus said. “I know this from experience. But you can get new things. You can meet new people. You can go on.”

I loved how this short story was set in 1929 New York, while Magnus is trying to run a speakeasy. And seeing his magic camouflage this secret pub into a tea party was pretty much the best thing ever. Sadly, that’s all I truly enjoyed about it. I mean, I guess seeing Hotel Dumort almost become a portal to Hell was pretty cool, too. But this story, and the new characters, just didn’t win me over as hard in this one.

My heart, my poor broken heart. This literally felt like torture to read after finishing City of Heavenly Fire. Raphael Santiago was also a character that didn’t hide his pain and anger; and I always respected that. But everything he had to go through? Man, oh man. I will say that this story got pretty dark and trigger warnings for kidnapping, murder, and maybe even pedophilia. Louis is for sure the most evil person I’ve seen in the Shadowhunter world yet. Basically, in 1953, Magnus is a private detective, and Guadalupe, Raphael’s mother, hires him to find her son. This story just made me feel every single emotion. I also enjoyed seeing Hotel Dumort start to become the vampire lair. But the shining star of this book was obviously Raphael and his mother and the unconditional love that a mother should always have for her child. Ah, I didn’t ask for these tears all over again.

➽ The Fall of the Hotel Dumort – ★

“Because in the end nothing is worse than seeing the fall of one you loved. It was somehow worse than losing a love. It made everything seem questionable. It made the past bitter and confused.”

This was easily my least favorite in the collection. Like, it read like I was back in elementary school watching police officers tell us about the D.A.R.E campaign. Basically, this one is set is 1977 New York, and Camille and her vampires are getting high from drinking the blood of humans on drugs, and they get really addicted. I did enjoy the ending with the memory spell, but that was about it.

“This was love, new and bright and terrifying…”

Firstly, I will say that it’s really skeezy that Alec was indeed seventeen when he and Magnus started at least kissing one another. I don’t want to make light of that whatsoever, and I completely think it was wrong. But if you ignore that, I really loved this short story and seeing a glimpse in the Shadowhunter world before everything went down in TMI. I also really loved the scene with Izzy and Magnus; it was pure, perfect, and everything I’ve ever wanted. Also, I love how this heartfelt story was going on with a blue demon just hanging out in the apartment.

“It was one of the few things he had to believe in, the possibility of beauty when faced with the reality of so much ugliness.”

The start of this novel and the homophobia really surprised me. I actually loved how Cassie Clare blatantly brought it up, rather than using metaphors with the oppression of the Downworlders, even though it hurt to see. But this short story also made me fall even more in love with Catarina, who is working at an HIV clinic because even people in the medical field can hold hateful prejudices. But the middle of this story, we got to see the behind the scenes start of Valentine and his (mostly) brainwashed circle. But the end of this story was the shining light! Seeing Tessa accept Clary with literal open arms made me tear up. Seeing her talk about her loves, her losses, and giving Jocelyn’s child a new start was really beautiful and made me very emotional. I loved this one, friends.

“And silver, though few people knew it, was a rarer metal than gold.”

Oh lord, this was adorable. This story shows Magnus and Alec’s first date and it was pretty sweet. Again, I will say that it is incredibly not okay that a 300+ year old warlock is dating a seventeen-year-old, but if you take that away from the equation then it was a really sweet and realistic depiction of an awkward and messy first date. Well, besides going to bar and having to fight a werewolf together.

➽ The Voicemail of Magnus Bane – ★★

“Please don’t ever tell Jace I said he was a badass.”

This short story is just a transcript of voicemails that the Shadowhunters left for Magnus after the end of City of Lost Souls, when he and Alec broke up. It just wasn’t enjoyable and was a lot of harassment even though I know that it was coming from a place of good. I just, thought this was honestly a bit pointless, but I know it was supposed to be heartwarming. I will also say that I think it was a really poor choice for a concluding story, because it for sure finished the entire anthology on a low note.

I gave The Bane Chronicles three stars overall, because out of a possible 55 stars (5 stars possible for each of the 11 stories) this collection accumulated 35 stars (~63%)! But I really do think this is such an important addition to this world, and I very much feel like it is a necessary read. Even if it just means that you get to meet James Herondale.

Buddy read with Lea at drumsofautumn! ❤